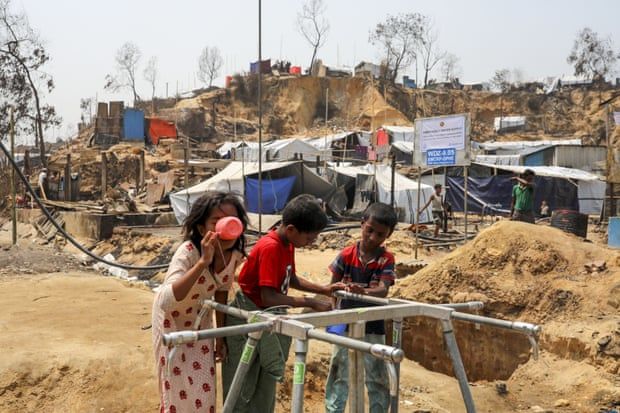 The government has been accused of abandoning Rohingya refugees in Bangladesh after cutting aid to the humanitarian response by more than 40%.

“This decision will have catastrophic consequences for some of the world’s most desperate and vulnerable people. The UK is stepping back when they need us to step up,” said Kirsty McNeill, Save The Children’s executive director of policy, advocacy and campaigns.

McNeill said the cuts were not surprising after the government already reduced aid to Yemen and Syria, but were “shortsighted”.

“[Rohingya refugees] now live in dangerous and cramped refugee camps struggling to contain Covid-19. There have been more than 80 fires so far this year in what is the world’s largest refugee settlement [around Cox’s Bazar], with a population density six times that of New York City,” said McNeill.

On Thursday, Bangladeshi authorities imposed a lockdown in five refugee camps in Cox’s Bazar following a rise in Covid-19 cases. According to the UN’s refugee agency, UNHCR, 320 cases have been recorded in April and May, more than a third of the total since the pandemic began.

Anupom Barua, the principal of Cox’s Bazar Medical College, told AFP the number of infections in the camps is “alarming”.

There are at least 885,000 Rohingya living in Bangladesh, most of them since 2017, when the Myanmar military launched an operation against the minority group, which the UN described as genocidal.

“This is not the moment for the UK to abandon international leadership,” said Tun Khin, president of the Burmese Rohingya Organisation UK, in a statement.

“When foreign secretary Dominic Raab is cutting aid, the main target of these aid cuts will be Rohingya children. The future is disappearing for the children in the camps. With the growing population hardly receiving any education, in 10 years we will have a lost generation.”

During the launch of the response plan, the UK’s ambassador to the UN in Geneva, Simon Manley, recognised that no long-term solution to the Rohingya had been found and that the military coup in Myanmar had complicated the situation.

Burma Campaign UK accused the government of not matching its condemnation of the coup with support for the Rohingya.

“Dominic Raab talks the talk but he doesn’t walk the walk on Burma. He likes to offer statements, whether it is on justice or support to protesters, but doesn’t follow it up with action. This includes aid. In their most dire moment of need, Dominic Raab has decided to abandon the poorest people of Burma,” said Karin Valtersson, its campaigns officer.

In 2017, the British government pledged £129m to the Rohingya response after the mass displacement. But spending has reduced each year. 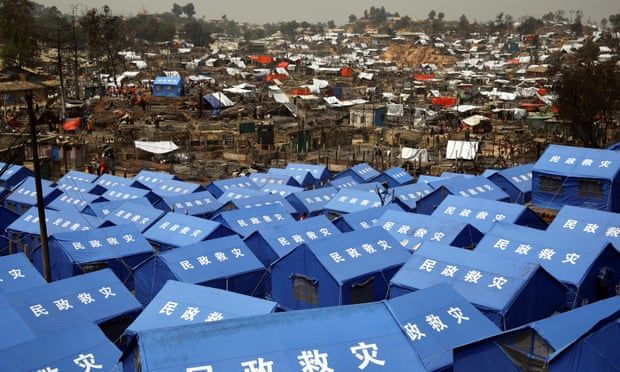 Tents donated by China in Cox’s Bazar, Bangladesh, 24 March 2021. The UK has reduced its spending on Rohingya response each year since 2017.

The joint response plan has suffered overall from dwindling donations. On Tuesday, it was announced donors had pledged just 35% of the $943m needed for 2021 to support the Rohingya and almost 500,000 people living near the camps with a range of basic services including food, water and healthcare, as well as protection for women and girls.

The UK government is cutting its aid budget from 0.7% to 0.5% of gross national income this year, but it has said it aims to raise spending when the financial impacts of the coronavirus pandemic have eased.

The FCDO said: “The UK is spending more than £10bn this year to fight poverty, tackle climate change, respond to humanitarian crises and improve global health. Since 2017, the UK has contributed over £321m to the Rohingya response and we remain a leading donor to the Rohingya crisis response in Bangladesh.”