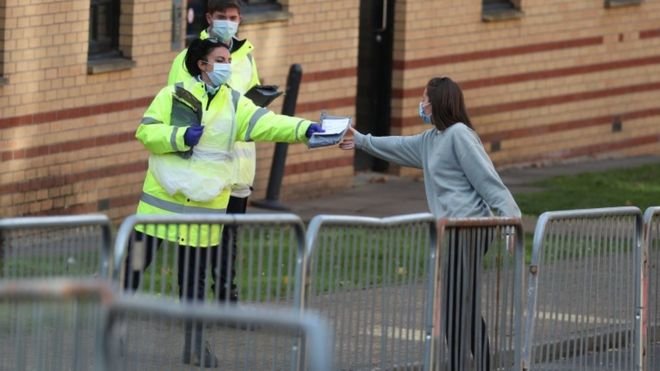 Students in Scotland told not to go to pubs

Students in Scotland are being told not to go to pubs, parties or restaurants this weekend in a bid to stem a spate of coronavirus outbreaks.

Hundreds of university students have tested positive at campuses across the country, with many more self-isolating.

Universities have now pledged to make it "absolutely clear" to students that there must be no parties.

And they will not be allowed to socialise with anyone outside of their accommodation.

Students have also been warned that any breaches of the new rules "will not be tolerated".

The stricter guidelines were announced after opposition leaders accused First Minister Nicola Sturgeon of a "basic failure" to anticipate the problem and provide more testing on university campuses.

However they have been criticised by the National Union of Students Scotland as "unjustified"and "deeply concerning".

President Matt Crilly said it was especially concerning for students who relied on income from hospitality jobs, and showed "complete disregard" for their mental health and wellbeing.

Meanwhile the Children and Young People's Commissioner Scotland has raised concerns about the "human rights implications" of the restrictions.

Universities Scotland said the new guidance that had been agreed with the Scottish government was a "necessary step at this crucial moment of managing the virus in the student population, to protect students and the wider community".

The new rules state that all universities will "make absolutely clear to students that there must be no parties, and no socialising outside their households".

They go on to say: "This weekend, the first of the new tighter Scottish government guidance, we will require students to avoid all socialising outside of their households and outside of their accommodation.

"We will ask them not to go to bars or other hospitality venues."

Extra staff will be brought into student accommodation to watch for any breaches of the guidance and to support students who are self-isolating.

Later Universities Scotland denied the move amounted to a ban but admitted it was a "big ask".

And Nicola Sturgeon clarified that the rules about avoiding hospitality applied only to this weekend.

'We're getting punished for living here' 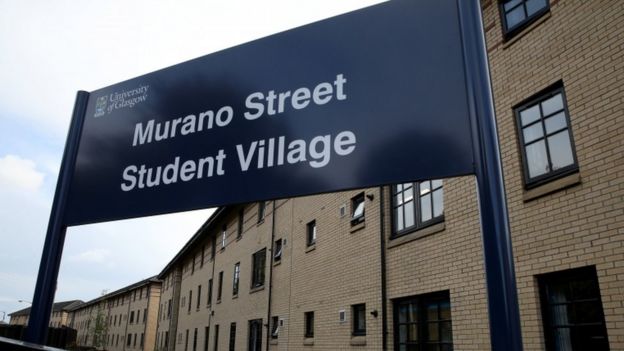 One Glasgow University student, Elise, told BBC Scotland that she was angry at the new rules imposing strict restrictions on their social lives.

The first-year student is currently isolating at Murano Street halls, after one of her flatmates tested positive.

She described the new restrictions as "quite ridiculous" and said it was wrong to pin the blame on students for spreading the virus.

She asked why the university told them to move into the halls when they could have followed their online courses from home.

"We were told to come to university halls - 48 people from across the country in one building- it was inevitable that it was going to spread," she said.

"We are getting punished for just living here but we were told to come.

"There's no reason for us to be here because everything is online."

Another student at the Murano halls asked how the requirement not to go to pubs was going to be policed.

"Will there be officers going up to students and asking if they are students?

"We are isolating so we won't be going to pubs anyway but what about those students who are fine? It's a depressing and bleak situation." 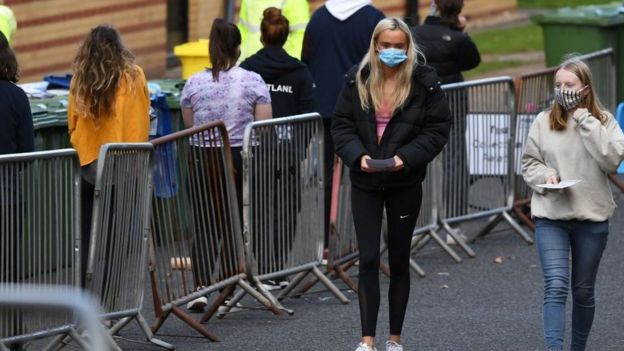 Police Scotland will also be monitoring student behaviour off-campus and in private accommodation.

And private providers of student accommodation will also be urged to strictly enforce the guidance.

Students will also be required to download the Protect Scotland app.

The guidance warns: "We will take a strict 'Yellow Card/Red Card' approach to breaches of student discipline that put students and others at risk.

"While we first want to advise students about breaches of discipline, we will not hesitate to escalate this to disciplinary action including potential discontinuation of study."

In a Twitter message directed at students, First Minister Nicola Sturgeon said she was sorry Covid was "making this special time of your lives so tough".

"But it won't be forever and the more we get this virus back under control now, the sooner you'll get a bit of normality back," she said.

Several universities across the country are dealing with major outbreaks of the virus, with many students in halls of residence in Glasgow, Dundee, Aberdeen and Edinburgh all being told to self-isolate.

A total of 172 Glasgow University students have so far tested positive, with 600 in isolation, while all 500 residents at the Parker House halls in Dundee have been told to quarantine.

And 120 cases have been identified in an outbreak at Edinburgh Napier University.

Opposition parties have argued that the Scottish government should have been better prepared for outbreaks when university students returned for the new term.

Ms Sturgeon has said the number of positive cases at universities was likely to increase, but claimed this showed that the test and protect system "is working, and we must continue to have confidence in that".

She urged students to follow the latest guidance and said she was sorry that the pandemic was "making this special time of your lives so tough".

Life for university students was already very different this term.

Most students were already set to learn mostly online, but the university experience is a social one as much as an academic one.

Perhaps the most significant move is to appeal to students not to visit bar or hospitality venues.

Ultimately students who break the rules on campus or in university accommodation face expulsion.

However, universities know they also have to appeal to the individual's sense of responsibility and common sense.

It will still be a big ask. Homesick students won't usually be able to go back inside the family home they lived in until a few weeks ago.

Starting university can be a difficult experience - a student may not like their course or may find it hard to live away from home or make new friends.

This year it will be even tougher so for that reason, it will be more important than ever to consider the wellbeing and mental health of students.