An extension to the ban on foreign holidays in order to control the spread of coronavirus cannot be ruled out, Defence Secretary Ben Wallace has said.

Mr Wallace told the BBC that booking a trip abroad would be "premature".

It comes after a scientist on a government advisory body said summer holidays overseas are "extremely unlikely" because of the risk of travellers bringing variants to the UK.

The earliest date people in England could holiday abroad is 17 May.

The Scottish and Welsh governments also said international travel will not be possible before 17 May, while Northern Ireland has not set a date.

While the devolved nations issue their own guidance on international travel, they have been broadly in line with Westminster.

Non-essential travel is currently banned from the UK and those coming to the UK must quarantine.

A government taskforce will report to the prime minister on 12 April detailing when and how international travel can resume.

People can currently travel abroad for a limited number of reasons, such as education or work.

Mr Wallace told the BBC's Andrew Marr Show that he had not booked a holiday abroad, adding it would be "premature" to do so while we are "seeing growing variants".

When asked whether the ban on foreign holidays could be extended, Mr Wallace said: "I think we will play it by ear... I'm not going to rule anything in or anything out.

"I think the first thing is we are not going to do anything that puts at risk this national effort to control this pandemic. All the indications are in the right direction at the moment and let's take it step by step." 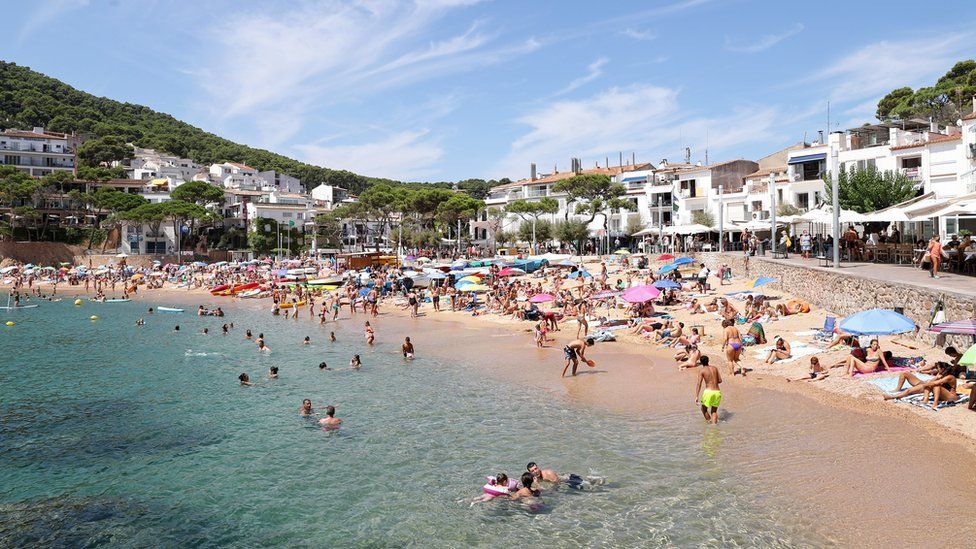 When asked about trips abroad, Dr Mary Ramsay, head of immunisation at Public Health England, told Andrew Marr it was "too early to say".

"I think everyone has to wait and see. We really don't know. The situation changes so quickly. Numbers are going up at the moment in continental Europe and that's very concerning," she said.

She added that she hoped countries on the continent can get their vaccine programmes "on track" to mitigate the rise in cases.

"But obviously the safest thing is to stay where you are. And to avoid anything that increases your risk and I think it's really too early to say what sort of summer we might be able to experience," Dr Ramsay said.

She added that even those who have been vaccinated could potentially still transmit the virus, saying that restrictions could last for "quite a long period of time".

Shadow foreign secretary Lisa Nandy told Andrew Marr that she will not be booking a foreign holiday.

"I know everyone is desperate to go on holiday but we have got to proceed with caution.

"We can't allow the good work that has been done from the vaccine rollout to be unravelled by unlocking too quickly or by failing to secure our borders."

Ms Nandy added: "We do need to be careful, we do need to be cautious, and frankly I haven't booked a foreign holiday for this summer and I won't be doing so because I don't think we're there yet."

Half of all UK adults have now received a first dose of a vaccine, with Friday being a record day for Covid jabs - a combined 711,156 first and second doses were given.

But Sir David King, former chief scientific adviser to the UK government, said despite the vaccine rollout, the UK should not become "complacent".

"We know that new variants have recently appeared in France, in California, in the Philippines and in Brazil. And in the UK there are now already 300 cases of the South African variant.

"I don't think that we can be complacent about any of this because we don't know what the vaccine efficacy is with these new variants. So we need to be very, very cautious in the management of the travel business."

Dr Mike Tildesley, a member of the Scientific Pandemic Influenza Group on Modelling, which feeds into the Sage group of government science advisers, said on Saturday the UK faces a "real risk" if people travel abroad, adding that international travel for the summer was "extremely unlikely".

Separately, Mr Wallace said the EU should not "build walls" around the distribution of jabs following a threat by the European Commission to block vaccine exports to countries including the UK.