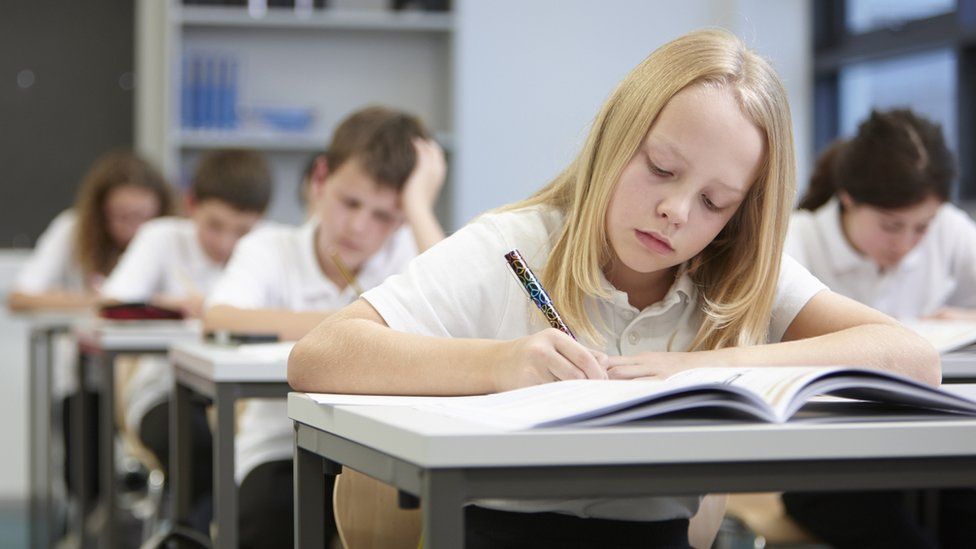 Covid: One in 20 secondary-age children infected in England

One in every 20 children of secondary school age in England is infected with coronavirus, according to the latest estimates from the Office for National Statistics.

This is the highest reported rate for this age group - or any other - since the pandemic began.

Children's risk from the virus is very low, and serious illness is rare.

A single vaccine dose is now being offered to all 12 to 17-year-olds in schools across the UK.

That followed a decision by the UK's four chief medical officers that a Covid vaccine for this age group would help keep children in school and benefit the poorest families.

Previously, only teenagers with health conditions which put them at increased risk of being seriously ill with Covid were offered two doses, as well as children living in the same house as people who are very vulnerable to the virus.

The ONS data covers the week up to 25 September, and estimates a steep rise in infections in children aged 11-15 over the last few weeks, with nearly 5% now testing positive - up from 2.8% the week before.

Infections in younger primary-age children have been increasing, but much less sharply, with 2.6% testing positive. 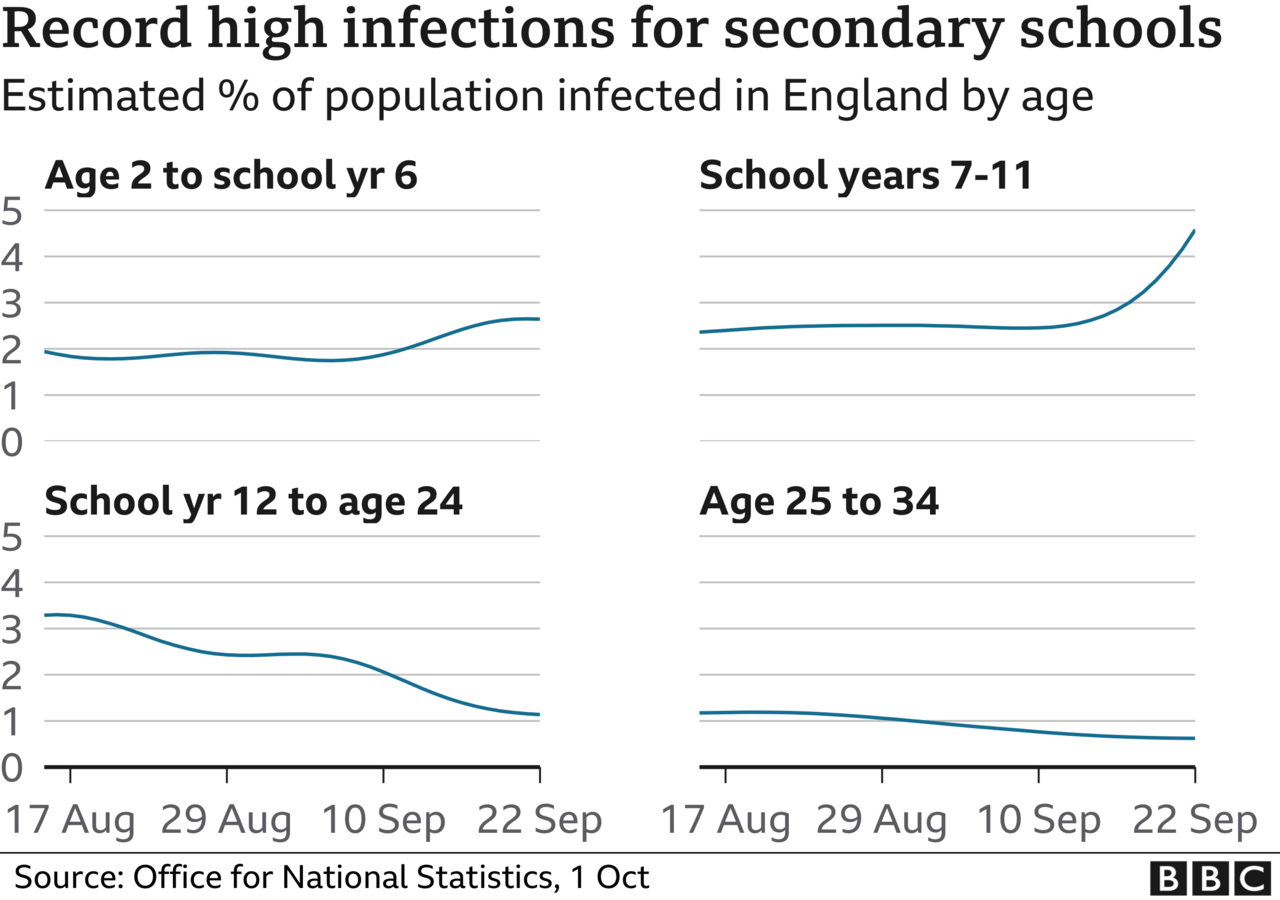 Infections in young adults have now decreased to around 1% affected, and in older adult groups infection levels remain even lower.

Prof Kevin McConway, emeritus professor of applied statistics, at The Open University, said the infection rates in 11 to 15-year-olds were "extraordinarily high", adding that the fall in infections in young adults, who have now been vaccinated in large numbers, was "pleasing".

Around 1.2% of the UK population - or one in 80 people - is likely to be infected, the ONS says, which is little changed from the previous week.

The percentage of people testing positive went up in England and Wales, decreased in Scotland and stayed roughly the same in Northern Ireland.

The ONS estimates are based on tests carried out on a random sample of the population, whether they had symptoms or not.

Government data on cases of coronavirus in England - which are more recent and cover those coming forward for tests and getting a positive result - shows a similar spike in 10 to 14-year-olds.

"Wear a face covering in enclosed spaces, avoid mixing with others if you feel unwell and get a PCR test straight away if you have any Covid-19 symptoms."

She added that the best way to protect against Covid was to get the vaccine.

Other viruses are also circulating and affecting children. In the summer, there was a jump in RSV (respiratory syncytial virus) in the under-4s and, in recent weeks, cases of the common cold have risen sharply in the under-14s, PHE data shows. 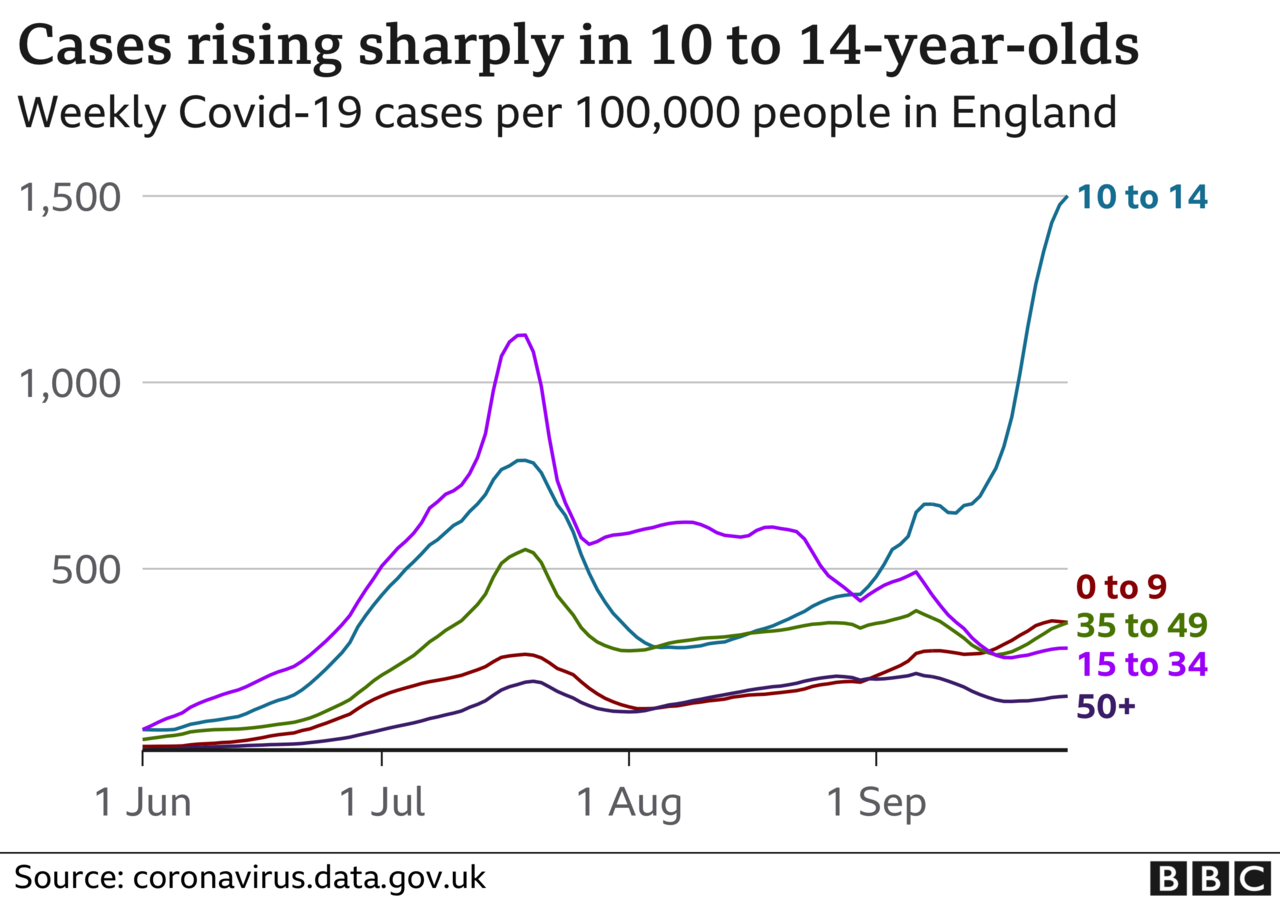 Now that more than 80% of over-16s in the UK are fully vaccinated against Covid-19, and booster doses are being offered to the most vulnerable, deaths and serious illness are expected to stay at low levels.

But there are concerns about what this winter will bring, with flu and other viruses making a comeback.

And there has been criticism that the rollout of one vaccine dose to 12 to 15-year-olds took too long to happen, after the UK's vaccine committee asked for additional advice on the wider benefits of vaccination.

This delay meant children had returned to school for the autumn term before any decision was made.

Six per cent of 12 to 16-year-olds have now had one vaccine dose in England while, in Scotland, the figure is 14%.