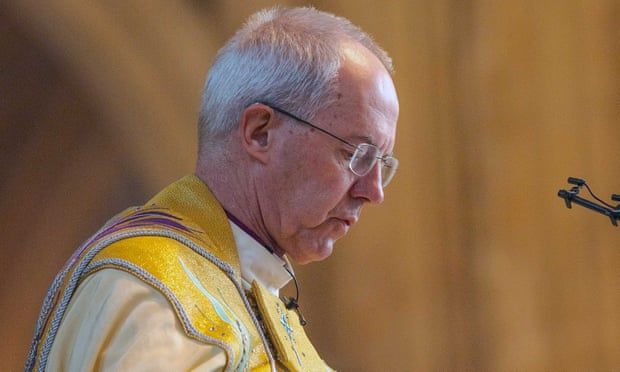 Boris Johnson criticism of archbishop of Canterbury ‘a disgraceful slur’

Prime minister accused Justin Welby of having ‘misconstrued’ Rwanda asylum policy
Boris Johnson’s criticism of the archbishop of Canterbury over his comments on the UK government’s Rwanda asylum policy is a “disgraceful slur”, a senior Church of England official has said.

The prime minister accused Justin Welby of having “misconstrued” the policy of sending some asylum seekers to Rwanda.

Sources close to Johnson said he accused the senior clergyman of being “less vociferous” in his condemnation of the Russian president, Vladimir Putin, than he was in his attack on the asylum policy.

The criticism from Johnson came in a private address to Conservative MPs in parliament after he was forced to apologise repeatedly over the fixed-penalty notice he received for breaching coronavirus laws.

The Church of England’s head of news, John Bingham, said if the reports of Johnson’s behind-closed-doors comment were true it was a “disgraceful slur”.

Johnson appeared angry at Welby’s criticism of the government’s plan to send some asylum seekers who arrive in the UK on a one-way trip to Rwanda.

The archbishop raised “serious ethical questions” about the policy in his Easter Sunday address and said it cannot “stand the judgment of God”.

In the sermon, he said “subcontracting out our responsibilities” was “the opposite of the nature of God”.

The archbishop said: “The details are for politics and politicians. The principle must stand the judgment of God, and it cannot.

“And it cannot carry the weight of our national responsibility as a country formed by Christian values; because subcontracting out our responsibilities, even to a country that seeks to do well like Rwanda, is the opposite of the nature of God, who himself took responsibility for our failures.”

Sources said Johnson accused “senior members of the clergy” of having “misconstrued the policy”.

The prime minister was said to have then added that the clergy were “less vociferous” in their condemnation on Easter Sunday of the Russian president than they were of the migration policy.

During his Easter sermon, although he did not mention Putin by name, Welby did call for a “Russian ceasefire, withdrawal and a commitment to talks”. He also called for a ceasefire in Ukraine and spoke of his concern over the cost of living crisis.

The asylum policy has received widespread criticism, with more than 160 charities and campaign groups labelling it as cruel and urging for it to be scrapped.

In the House of Commons on Tuesday, Theresa May, the former prime minister who devised the “hostile environment” policy on migration, said: “I do not support the removal to Rwanda policy on the grounds of legality, practicality and efficacy”.
#Boris Johnson  #Coronavirus  #Johnson
Add Comment