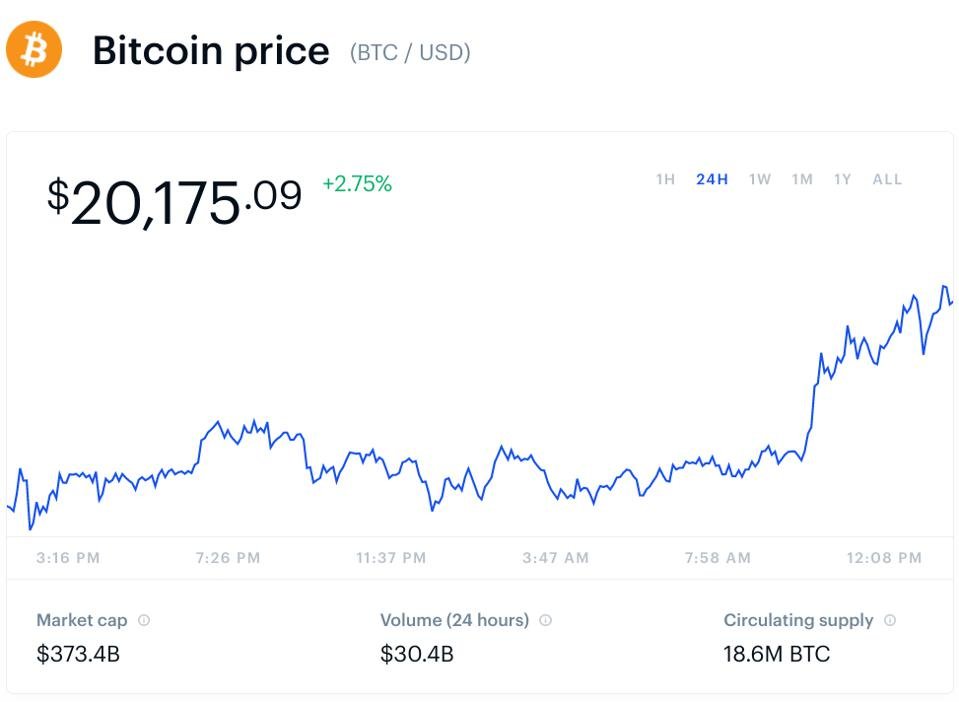 Bitcoin, after bouncing around under $20,000 per bitcoin for the last month, has smashed through the psychological price barrier.
The bitcoin price, hitting $20,440 on the Luxembourg-based Bitstamp exchange before falling back slightly, is up around 200% over the last 12 months as governments ramp up spending in the wake of coronavirus lockdowns, investors look to bitcoin as a hedge against inflation, and institutional interest in bitcoin rises.

Bitcoin investors, who have cheered the bitcoin price rise this year, are feeling increasingly bullish going into 2021—with many predicting the price will continue to climb.

"As we come to the end of what has been an iconic year for bitcoin, I can only see more positive growth in 2021," the chief executive of Isle of Man-based bitcoin and cryptocurrency exchange CoinCorner Danny Scott said via email, pointing to U.S. business intelligence company MicroStrategy adding bitcoin to its corporate treasury and payments giant PayPal rolling out bitcoin buying and spending services as primary drivers of the 2020 bitcoin bull run.

Bitcoin's surge over $20,000 comes after a Reuters report claiming fund manager Ruffer Investment Management has moved around $675 million of its clients' money into bitcoin. Earlier reports had suggested the London-based firm, which manages around $27 billion worth of assets, had allocated a far smaller sum to bitcoin.

"Compared to 2017 when demand came from the retail market, this will eventually happen again, of course, the current demand is coming from an institutional level completely flying under the radar for many people and it looks set to continue through 2021," Scott added.

MicroStrategy has bought around $500 million of bitcoin so far this year, last week doubling down on its bitcoin bet and raising a further $650 million via a bond sale to buy more bitcoin.

Other companies have followed MicroStrategy's lead and a number of high-profile investors have named bitcoin as a potential hedge against the inflation they see on the horizon.

However, some experienced bitcoin traders offered words of warning to potential bitcoin buyers.

"History has a warning for people buying at the new all-time-high," financial author and trading veteran Glen Goodman said via email.

"While I'm optimistic about the long-term prospects for bitcoin, four years ago we had a very similar situation with bitcoin breaking new ground, but just two weeks later its price plummeted by more than a third.

"History doesn't always repeat itself, of course, but the lesson is to be on your guard. The market often teaches harsh lessons in humility to those who risk too much on what they're told is a sure thing.

"Some of the biggest investors in the world have been singing bitcoin's praises in recent weeks. This suggests they already own bitcoin and are hoping to encourage more people to buy and boost the price upwards. Sometimes Wall Street 'whales' do this in order to sell their bitcoins to the little guys at higher prices."
#Coronavirus