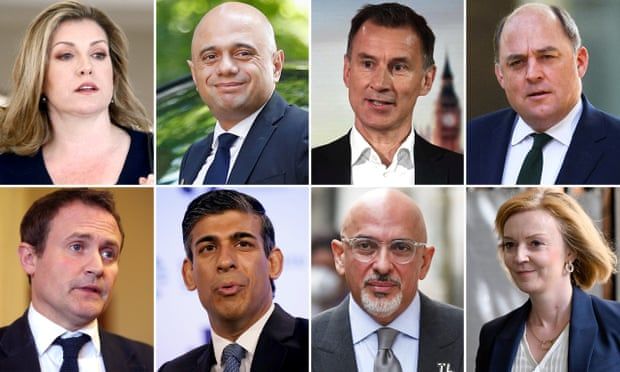 Who are the favourites to succeed Boris Johnson?

Boris Johnson’s future as prime minister is hanging by a thread following the resignations of Rishi Sunak and Sajid Javid.

But while the lack of an obvious successor had made many Tory MPs hesitant to oust Johnson, there is no shortage of potential candidates.

The main contenders have been jostling for position – some quietly, others not – over recent months.

Here we set out the potential successors – with a rating out of 10 for their chances.

The former defence secretary rocketed to the fore as a potential favourite on Tuesday evening, with bookmakers Coral installing her as the favourite to replace Johnson.

The MP has also emerged as a firm favourite among the Tory faithful. Results of a poll of party members published at the weekend by Conservative Home put her as the second favourite choice, just behind the current defence secretary, Ben Wallace.

Mordaunt had long been tipped for cabinet greatness as a Brexiter but she was viewed as disloyal under Johnson for having backed Jeremy Hunt. She has been one of the more forthright ministers when it comes to criticising the PM over Partygate and appears to be setting herself up for a run at the top job.

The chancellor has probably re-energised his leadership hopes by his bold move to quit the cabinet, even if Sajid Javid beat him to the button.

For long regarded as a favourite to replace Johnson, Sunak’s profile took a hit from Partygate – he received a fixed-penalty notice – and by the potentially more damaging controversy over his family’s financial affairs.

That episode sent his popularity plummeting after he had built a strong public profile due to his press conferences explaining the Covid support schemes, winning him credit for swift action to keep families and businesses afloat.

However, he has also been criticised recently for slowness to help people in the cost of living crisis and gaffes that suggest he is out of touch, such as flaunting expensive personal items and building a swimming pool at his Yorkshire mansion. He continues to have some backbench supporters who see him as calm and unflappable. But others believe he may not even want the top job as much as some of his inner circle want it for him.

The foreign secretary was quick out of the traps to declare her support for Johnson after the departure of Javid and her leadership rival Sunak.

The move was seen as an attempt to shore up potential support from other Johnson loyalists – a not insignificant constituency in any future Tory leadership battle. However, her star has fallen somewhat in recent times as figures like Hunt and Mordaunt have edged ahead in some bookies’ estimations.

Before now, Truss has been busy burnishing her public profile with Instagram shots and channelling Margaret Thatcher by wearing a headscarf while driving a tank. As the first Tory female foreign secretary, she has taken credit for securing the release of Nazanin Zaghari-Ratcliffe and imposing sanctions on Russian oligarchs, despite a sluggish start and accusations the Foreign Office was under-prepared for war in Ukraine.

The defence secretary has been topping Conservative Home polls of members’ favourite cabinet ministers on account of his handling of the war in Ukraine and the evacuation of Afghanistan.

He has very little public profile but Tory MPs say his popularity may have begun to make him consider a bid, with many regarding him as the type of figure who would mark a stark contrast in style to Johnson.

In a sign that he may be one to watch, he has been edging up in the estimations of bookmakers in recent times.

Despite long enjoying a profile as the bookies’ favourite to replace Johnson, the man who beat him in the last Tory leadership election, the former health secretary’s odds have now plummeted with many of the same bookies. He has frequently been talked about as the “safe pair of hands” replacement for Johnson – but in the wake of the moves by Javid and Sunak, a lack of boldness on the part of Hunt may now be more apparent than ever. In terms of character, the PM and Hunt remain poles apart: Johnson is all bombast and cheap jokes. Hunt is neither. But his achilles heel is that he was on the remainer wing of the party, something that could lose him votes to potential rivals such as Mordaunt.

Hunt has tried to play the role of elder statesman from the backbenches, offering gentle and usually friendly criticism over the government’s Covid mistakes. Firmly on the centrist side of the party, he could be viewed as a calming presence after the tumult of the Johnson years, if the membership are desperate for some stability, although their Brexit inclinations will weigh heavily. Among the general public, he is not a hugely polarising figure, apart from among the medical community who cannot forgive his row with junior doctors during the controversy over their contracts. The (so far) Johnson-fanatical Daily Mail regularly mocks his leadership ambitions.

Despite a lacklustre performance in the 2019 Tory leadership race – in which he failed to make it into the final round – Javid might well have resurrected his own leadership hopes by effectively firing the starting gun on a new contest.

The former chancellor made a dramatic return to the cabinet in June last year as health secretary, after previously quitting in a clash with Dominic Cummings.

Once talked up by many as a strong contender to leader the party, memories of his relatively short 16-month tenure as chancellor had somewhat faded as decisions taken by Rishi Sunak during the pandemic elevated the profile of his successor.

While Javid had the political nerve to jump first with his resignation on Tuesday evening, his letter was also markedly difference from that of Sunak, which was focused significantly on the need for a different economic strategy. By contrast, Javid’s was more furious in tone, placing a call for integrity at its heart.

The education secretary has gradually been emerging as an outside candidate who could rely both on a compelling personal backstory and a track record of competency in government.

The education secretary impressed his party as vaccines minister and – after he was rewarded with a more senior cabinet post - he has done a solid job of neutralising some of the difficult issues facing the Tories on education after the chaos of Gavin Williamson’s tenure during Covid.

His backstory as a former refugee from Iraq who came to Britain as a child is impressive. But some Tory MPs may worry – as with Sunak – about his wealth, from the expenses-era criticism of him claiming to heat his stables, to his former business dealings in oil and gas.

There were some early signs that he may be wavering in his support for Johnson on Tuesday evening as other cabinet ministers and their advisers were quicker to signal that they were behind the prime minister in the wake of the Javid and Sunak resignations.

The former military officer is a favourite among Tory centrists – itself an obstacle of sorts in a party whose members and backbenchers have shifted right on many issues.

Although it would be highly unusual to have a new prime minister with no cabinet or shadow cabinet experience, some MPs believe it could be good to have a candidate untainted by the Johnson regime.

However, he is relatively untested and some worry his focus is too much on foreign affairs and not on the domestic agenda to be an attractive option.