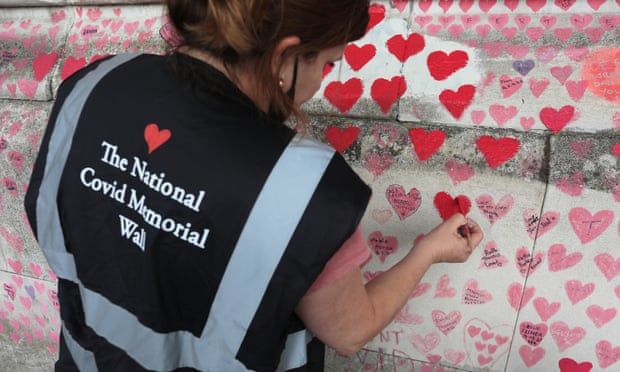 ‘We won’t let it fade’: bereaved call for UK Covid memorial to be preserved

Few memorials require restoration before they are complete, but that is the reality facing the bereaved who care for the national Covid memorial wall opposite the Houses of Parliament in London.

Armed with pots of crimson masonry paint, they have started refreshing the wall of more than 150,000 hearts, many of which are already fading in the sun and rain. They also have the sad task of adding 5,000 more, to catch up with the still-rising death toll. Like the pandemic, there is no end in sight. But soon, sections could be preserved using a specialist lacquer that has previously been deployed to protect street art by Banksy to create a memorial that could stand for years to come.

The idea of the team of bereaved, who meet each Friday, is to brighten faded hearts, trace over messages that have become almost indecipherable, and where people have spread their tribute across several hearts, confine it to just one. Then the lacquer would be overlaid. Talks are under way with a firm in Lichfield about how the sealant could work.

“There are people who would like to see it fade,” said Fran Hall, 60, who lost her husband, Steve Mead, 65, last October, three weeks after they married. “We’re not going to let that happen”.

Kathryn Butcher, 57, who lost her sister-in-law, Myrna Saunders, 56, in March 2020, was among those adding new hearts last week. She said she was angered by having to record new fatalities and “to know there’s someone else that’s been through the same as our family”. 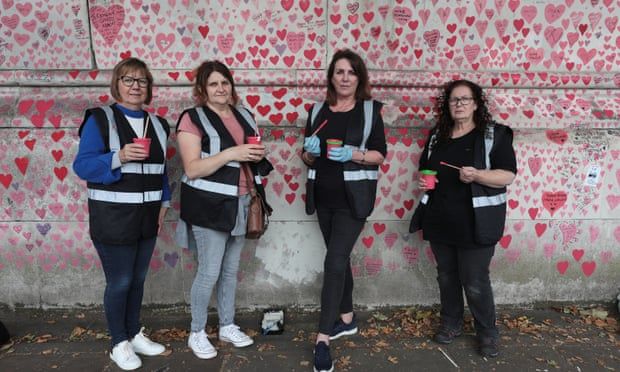 The restoration is a sensitive task. Most people on the group’s online forum supported adding fresh paint, but a few did not, believing that it should fade. The restorers are carefully turning a work that has the ephemeral dynamism of graffiti into a permanent memorial.

“I think it should be preserved,” said Lyn Jones, 69, who travels from Stoke-on-Trent to do the work after losing her husband, Gareth, 66, in March. Unlike memorials that may be built in the future, which are likely to be “orderly and calm”, “this is grief: it’s messy and untidy”.

In June, 200 MPs, peers and city mayors urged Boris Johnson to make the wall “a, if not the, permanent memorial to the victims of the pandemic”.

Among them was Afzal Khan, the MP for Manchester Gorton, who lost three relatives to Covid in the UK. He is now frustrated at a lack of response.

“Bereaved families want this memorial to remain permanent,” he said. “The only person standing in our way now appears to be the prime minister.”

A government spokesperson said: “We know that communities will want to find ways of commemorating what we have all been through and the government will support these efforts with a UK commission on Covid commemoration, as the prime minister announced on 12 May.”

While the bereaved await the commission’s membership and terms of reference, others are developing their own memorial concepts. £2.7m has already been raised for a permanent memorial at St Paul’s Cathedral in the form of a space for contemplation. In Scotland, the artist Alec Finlay, is designing a memorial in Pollok Country Park, Glasgow, which looks likely to include plans for installations at satellite venues. 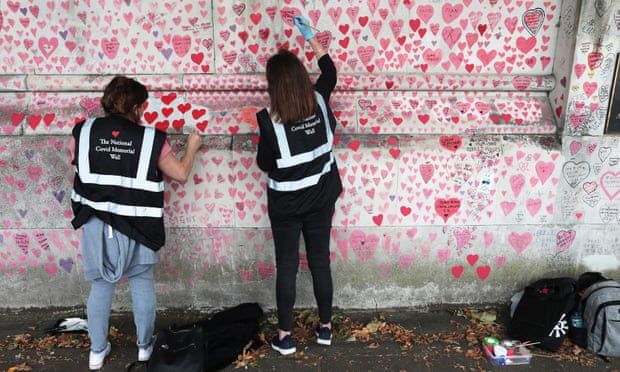 Volunteers working on the wall.

Roz Barr, an architect in London, has been working with the artist Julian Stair, who has embedded human ash in memorial works, and the landscape designer Dan Pearson to consider possible schemes. They were attracted to the idea of a project that “heals the land”, perhaps on a brownfield site.

“While in lockdown we became very insular, we had this greater relationship with nature,” she said, suggesting a landscape project “with surfaces that embed memory”. But, she said, the effectiveness of the wall means that possibly “it’s done”. Its position in front of parliament was powerful, she said. It appeared to be saying “look at us – look at what happened”.

Some have wondered if it is too soon to crystalise the pandemic in a long-term memorial.

Andy Groarke, whose architectural firm Carmody Groarke designed the 7/7 memorial in Hyde Park, said “creating a physical place to make sense of events is important to do, but do we have enough perspective?”

The 52 stainless steel columns of the 7/7 memorial were unveiled four years after the terror attacks, while eight cenotaphs designed by Edwin Lutyens for English towns and cities after the first world war were erected between two and nine years later.

The designer Thomas Heatherwick was recently invited by the government to discuss how the nation could remember the dead and recognise those involved in the pandemic response.

Heatherwick’s studio, which designed the 2012 Olympic cauldron and the doomed Garden Bridge in London, said it was approached to advise “as designers who have experience creating moments of national significance”.

The meeting was solely “about exploring appropriate ideas” rather than any plans for a memorial, it said.