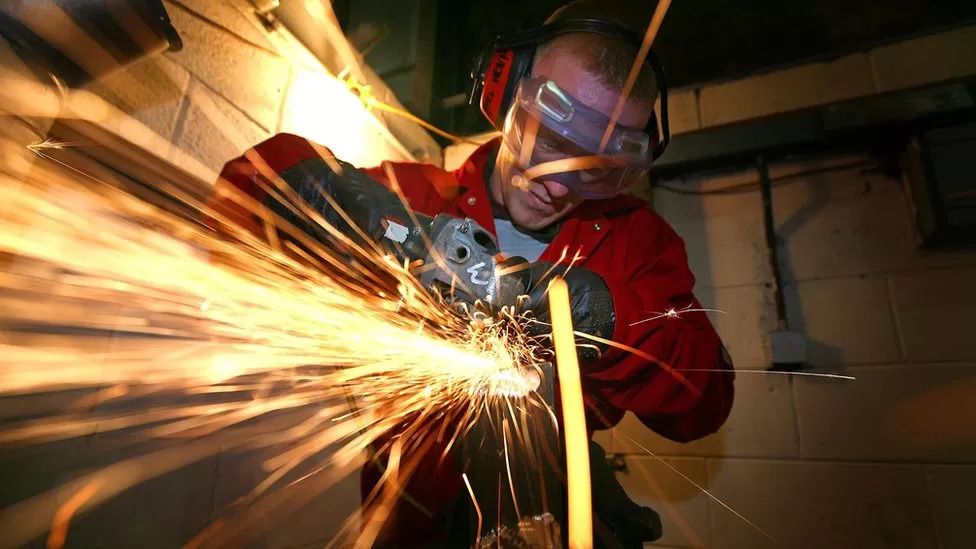 Thousands of people are dropping out of apprenticeships in England every year, after firms provided little or no training, according to a report.

The most recent official data suggests that nearly half of apprentices fail to complete their courses.

EDSK, an education think tank, found that the majority of people quitting cited "poor quality", including lack of training and bad management.

The government said it is introducing reforms "to boost quality".
Under apprenticeship schemes, which receive government funding, those aged 16 years

and over must get one day a week "off the job" to receive teaching and training.

EDSK found that many get less than the minimum weekly requirement while some receive nothing at all.

The report also said that the government allows firms to count watching online lectures as well as doing their homework as training.

"As a result, apprentices can go weeks, sometimes months, without receiving any training from a mentor or industry expert," it said.

"Training providers can still claim the maximum government funding available for each apprenticeship even if they offer no face-to-face teaching at all," it added.

The most recent government figures on retention rates show that 53% of people finished their apprenticeship in 2021. Therefore 47% of apprentices are not completing their programme.

Nearly 348,000 people started apprenticeships in England in the 2021-22 academic year, which is an increase on the previous period.

Applying the same 47% drop-out rate, EDSK estimates that some 163,500 of those apprentices will not finish their course, and for around 114,500 of them it will be due to the poor quality of their schemes.

It has been 10 years since the government conducted a review into the standard of apprenticeships in England.

Robert Halfon, the Minister for Skills, Apprenticeships and Higher Education, said: "We know there is more to do to ensure all apprentices get a great experience, which is why we're introducing a suite of reforms to boost quality."

He said this will include "refreshing" the register of training providers and strengthening accountability.

Education watchdog Ofsted will inspect all apprenticeship training providers by 2025, said Mr Halfon, adding that the government has launched a new feedback service for apprentices.

EDSK said problems with apprenticeship schemes are made worse because people are not given a curriculum or syllabus before they start their training, setting out what they will learn.

"It would be a national scandal if A-level or university students were treated this badly," said Tom Richmond, director of EDSK.

The schemes are also supposed to teach young people skills.

But the report claimed that the government has allowed some to rebadge low-skill roles as "apprenticeships".

In some cases, people end up with basic tasks such as heating pre-cooked meals, greeting customers, and answering telephone calls.

The think tank wants the government to force employers to publish a detailed training curriculum and said that at least 200 training hours must be delivered face-to-face.