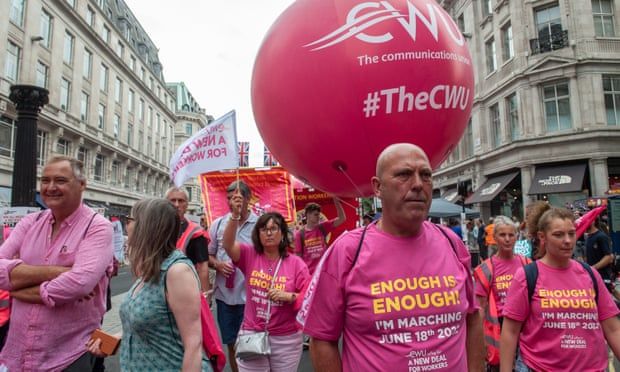 Union source claims MPs will join BT staff on Friday despite Labour leader’s call for frontbenchers to stay away
Up to 70 Labour MPs could join union picket lines on Friday as Keir Starmer faces a renewed battle to maintain party unity over support for striking workers.

One shadow minister was believed to be considering joining a Communication Workers Union (CWU) picket line as thousands of BT staff began two days of strikes over pay, which would set up a fresh potential conflict with the Labour leader’s office.

Starmer’s policy of ordering his frontbenchers to stay away from picket lines, in place since last month and thus far enforced very loosely, has prompted anger among a number of his MPs. It was questioned on Thursday by Sadiq Khan and Andy Burnham, the Labour mayors of London and Greater Manchester respectively, among others.

The issue returned to the spotlight after Starmer sacked Sam Tarry as a shadow transport minister for doing broadcast interviews from a rail strike picket line – although his presence there was not given as the reason.

Speaking to reporters in Birmingham on Thursday, Starmer said Tarry lost his role because he “booked himself on to media programmes without permission, and then made up policy on the hoof”, undermining collective responsibility.

One shadow cabinet member said they sympathised with Tarry, who also faces potentially being deselected by his local party, but “unfortunately, doing a full unauthorised media round left things untenable”.

Speaking on Thursday, Starmer stressed it was “quite right” for unions to act on behalf of members and that joining a picket line would not necessarily merit action against other frontbenchers, saying he would take “each case as it comes”.

But his stance has dismayed a number of backbenchers, and several shadow cabinet ministers are known to have concerns about the policy with the UK facing a possible wave of strikes in the autumn and winter over below-inflation pay awards.

Labour MPs said they were receiving calls from unions asking whether they would be supporting forthcoming industrial action. A CWU source said the union expected between 30 and 70 MPs to join BT workers at pickets, with Tarry due to attend one in central London. One shadow minister is also believed to be considering attending a picket.

The most vocal criticism of Starmer’s approach has come from the left of the party. In an article for the Guardian on Thursday, John McDonnell, who was shadow chancellor under Jeremy Corbyn, said there was “palpable” anger among unions.

“This may not matter to the leader’s team when the Tories are so helpfully self-immolating, but when times get tougher and the trade union cavalry is needed to save the leader, they may remember who was and who wasn’t on this summer’s picket lines,” McDonnell wrote.

However, one official said they believed the discontent was evident “well beyond the usual suspects” and the issue was likely to become more pressing as strikes spread.

Speaking on Thursday, Khan said that, but for the time pressures of his mayoral duties, he would happily join a picket line. “Absolutely,” he told LBC radio. “The trade unions have been a core force for good to our country over the recent weeks, months and years.”

Burnham said Labour had to be aware of the scale of difficulties people faced. “We can’t ever be a party that undermines working people fighting to protect their incomes and a cost of living crisis,” he told GB News. “If we’re not careful, that’s how we might come over.”

A Labour source said Starmer’s belief was that a party set on entering government could not endorse a series of union pay demands that it may then, for the public sector, have to decide on amid difficult economic circumstances.

“We do recognise it’s an emotive and important issue, and we have to toe a difficult path. This isn’t some attempt to have a symbolic clash with the unions, it’s much more prosaic,” they said.

But one MP said there was genuine concern about how Starmer’s stance came across to voters: “You have people like Martin Lewis warning about civil unrest over energy bills and poverty. People are really, really worried, and if they’re looking to Labour, the leadership doesn’t seem to be there for them.”
Add Comment