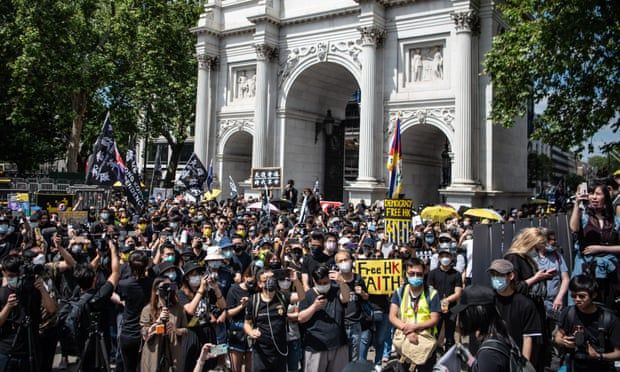 Hongkongers in Britain warns that many arrivals are being denied equal access to housing, education and jobs
The UK risks providing Hongkongers fleeing persecution in their homeland with safety and security in name only, a community leader has warned, as thousands try to flee the crackdown on civil liberties by Chinese authorities.

Julian Chan, the director of the Hongkongers in Britain group, said many people arriving in the UK were being denied equal access to housing, education and jobs, and that Westminster was not doing enough to support them.

“The UK risks providing Hongkongers with a country to live in, but almost no life to actually live when they get there,” Chan said.

He said administrative backlogs, which prevented Hongkongers from finding work when they arrived, and government policy barring them from accessing public money, meant many were “having to fend for themselves”.

In addition, with the latest official figures showing only about 20% of the British National (Overseas) visa applications made in February and March had been approved, he warned that many thousands of people who are vulnerable to persecution in Hong Kong could be left waiting for paperwork before they can escape.

This was particularly dangerous, Chan said, because Hong Kong recently passed a law that legal experts say has given the authorities a free hand to stop people entering or leaving – leading to fears that “exit bans” imposed in mainland China could also become reality in Hong Kong.

“A lot of people have been trying to speak quietly; they’re not announcing to all of their family and friends that they’re leaving.” Yet, despite the sensitivity, he said his organisation was dealing with cases in which people had been left waiting up to five months for a response from the Home Office.

“It’s not really fair for Hongkongers to have to wait for such a long time, especially if they are having to flee the situation there.”

June, July and August are expected to be peak months for new arrivals from the city, Chan said, as people rush to get out before the authorities can stop them – as well as to get to the UK ahead of the new academic year.

Hong Kong, a former British colony and supposedly a semi-autonomous Chinese special administrative region, has increasingly come under Beijing’s control as it continues its crackdown in response to pro-democracy protests in 2019.

Almost all political opposition has been silenced in the formerly politically pluralistic city – with many pro-democracy figures arrested, detained or having fled overseas – after the authorities passed a sweeping national security law in June last year that brought conditions in the city closer to those on the Chinese mainland.

The UK introduced the legal route for Hongkongers to come to the UK at the end of January and observers predicted more than half a million people were likely to take up the option.

Chan said his organisation had found that a lack of credit history and UK bank accounts, along with the unease of some landlords who wrongly believe they cannot rent to people on the BN(O) visa as part of the UK’s hostile environment policy, meant access to housing had been limited.

He added that, while the UK government rightly assessed Hongkongers in general as being highly educated and skilled, many were finding access to jobs in the UK limited because their qualifications were not recognised and because they faced lengthy waits for national insurance numbers.

Chan insisted that few Hongkongers arriving in the UK had any interest in becoming a burden on the state, and that some of them just needed its support initially to get on their feet.

He said a £2.6m government fund for community groups to support programmes helping newly arrived families was too meagre to make much of a difference.

A government spokesperson said: “Backed by more than £43m, we’re supporting Hong Kong British National (Overseas) and their families to have the very best start as soon as they arrive, and support them to find a home, schools for their children, opportunity and prosperity.”

The spokesperson said the government had an integration programme and 12 virtual welcome hubs, as well as providing funding for voluntary and community groups. They added that new arrivals were being given more information on renting and buying homes, while some landlords and letting agents had been updated on Hongkongers’ rights.
Add Comment