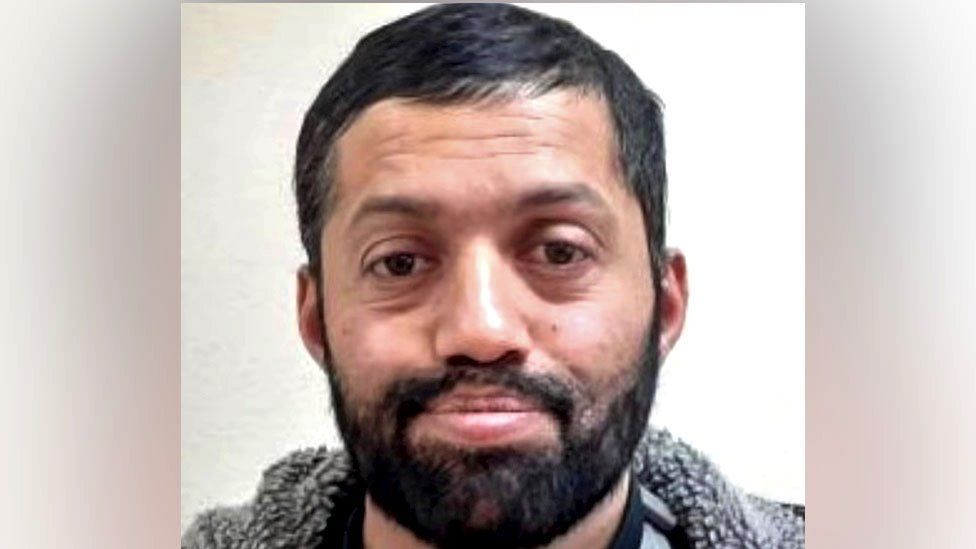 Two teenagers arrested in England as part of the investigation into a hostage-taking at a synagogue in Texas have been released without charge, police say.

British citizen Malik Faisal Akram, 44, was shot dead after a standoff with police on Saturday.

The siege at the synagogue in Colleyville near Dallas ended after 10 hours, with all four hostages unharmed.

Details of the ages and genders of the teenagers were not released.

They were arrested in south Manchester on Sunday evening.

Greater Manchester Police said officers from Counter Terrorism Policing North West had been "in constant contact with US authorities" to help with their investigation.

An address in north Manchester has been searched as part of their enquiries, the police force said.

It has emerged Akram, from Blackburn, Lancashire, was investigated by MI5 but by the time he flew to the US about two weeks ago, he was assessed as no longer being a risk.

He had been on the British security service's watchlist as a "subject of interest" in 2020 and was investigated in the second half of that year.

But by 2021 Akram, who had a criminal record in the UK, had moved from the active list to the "former subject of interest" list and was no longer considered a threat.

On Tuesday, White House spokeswoman Jen Psaki told reporters Akram had been checked "multiple times" against US government databases, which did not contain any "derogatory information" about him at the time he entered the country.

Akram is believed to have arrived via New York's JFK International Airport two weeks ago, according to police sources, and he is thought to have bought weapons "on the street" after arrival.

The siege began at around 11:00 local time (16:00 GMT) on Saturday, and police were then called to the Congregation Beth Israel synagogue.

Rabbi Charlie Cytron-White told BBC partner CBS the group had been praying when he heard a click that turned out to be the hostage-taker's gun.

Akram gained initial access to the synagogue during the service by claiming to be a homeless man, according to a police source quoted by CBS.

One hostage was released after six hours, while the other three - including the rabbi - escaped several hours later.

Rabbi Cytron-White said he and two other hostages were able to get out "without a shot being fired" after he threw a chair at the hostage-taker.

During the standoff Akram was heard on a live stream demanding the release of Aafia Siddiqui, a Pakistani neuroscientist who is serving an 86-year prison sentence in nearby Fort Worth, Texas, over attempts to kill US soldiers in Afghanistan.

Siddiqui has distanced herself from his actions, issuing a statement through a lawyer.

Home Secretary Priti Patel has offered "the full support" of the UK police and security services to her US counterpart.

Foreign Secretary Liz Truss has described the incident as an "act of terrorism and anti-Semitism", a view echoed by the Muslim Council of Britain, which called it a hate crime and expressed its solidarity with the Jewish community.

Temporary Assistant Chief Constable Dominic Scally, of Counter Terrorism Policing North West, said: "CTP North West is continuing to assist with the investigation which is being led by US authorities.

"Overnight, constructive meetings with colleagues from the United States have taken place."

Why wasn't he stopped?

The confirmation that Malik Faisal Akram was already known to MI5 will inevitably prompt the question: why wasn't he stopped?

Akram, who had a criminal record, was the subject of a brief, four-week investigation in 2020. MI5 officers concluded that he was not of sufficient concern to justify elevating him to a higher priority. He was put onto a list of former subjects of interest, which includes over 40,000 individuals.

By the time he flew to the US, MI5 were unaware of his intentions - but here there is a second question.

How was someone with his record able to get on a plane to the US, enter the country unchallenged without declaring his past, and obtain a gun in just two weeks?

In some cases British police officers have stopped suspect individuals from flying out of UK airports but since Akram's file was effectively closed, this action would not have been considered proportionate on national security grounds.

There is also a further angle concerning his deteriorating mental state. MI5 does have an in-house behavioural science unit but it's not clear if Akram's case was brought to their attention after his investigation was concluded in 2020.