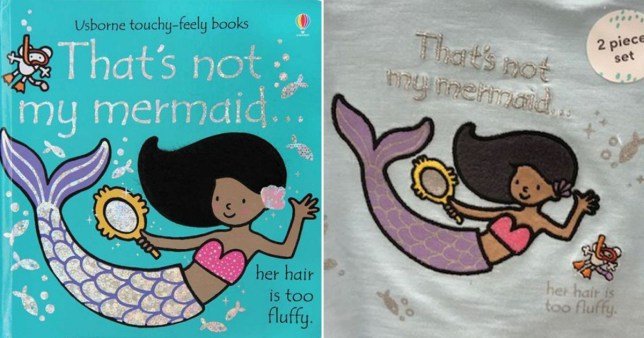 The kids' top shows a picture of a black mermaid with a caption calling her hair 'too fluffy'.

Tesco bosses have issued an apology after a customer spotted a piece of children’s clothing that deems a black mermaid’s hair ‘too fluffy’.

Mum Katie Wells was shopping in the Whitfield branch of the supermarket, in Dover, Kent, on Friday when she came across the t-shirt.

Showing a smiling black mermaid holding a hand mirror, the image is taken from children’s book ‘That’s Not My Mermaid’, written by Fiona Watt and illustrated by Rachel Wells (no relation).

But the issue was raised because the top shows the sea creature alongside the book’s title and a caption reading: ‘Her hair is too fluffy’.

The mum-of-two explained: ‘We were walking down the main middle aisle and we saw the set from a distance. I got excited because diversity in clothing is particularly rare.

‘I read the text on the shirt and was really shocked. It’s not something any child should read on a t-shirt, and it perpetuates a stereotype – it’s racism.’

By describing the mermaid’s hair as ‘too fluffy’, the image could be seen as suggesting black hair is not as desirable as other textures of hair.

This could lead to potentially damaging effects on children’s self-image as they grow up, with the book aimed at babies and toddlers.

Katie argued this is a ‘disappointing’ reflection of the people making decisions at the high street retailer.

‘Tesco needs to do better. They clearly need to diversify their purchasing team and be aware of this,’ she added.

‘It is not a new issue, especially with all that has been in the media recently, ignorance is not an excuse anymore. It makes me feel so sad and angry that this is how black children are growing up.’

The book is part of a ‘touchy-feely’ range published by Usborne Children’s Books, where pages are filled with various textures of material that encourage young readers to touch parts of the mermaid, including her hair.

That’s Not My Mermaid, by Fiona Watt and Rachel Wells, was released in 2005 (Picture: Kent Live / BPM Media)

In response to Katie’s complaint and her request to remove all of the t-shirts from their stores, a Tesco spokesperson said: ‘We remain absolutely committed to ensuring that Tesco is a place where everybody is welcome and apologise for any offence caused.

‘We will not be purchasing any more orders of this product.’ There has, as of yet, been no comment about whether the supermarket will continue to sell remaining stocks of the offending item.