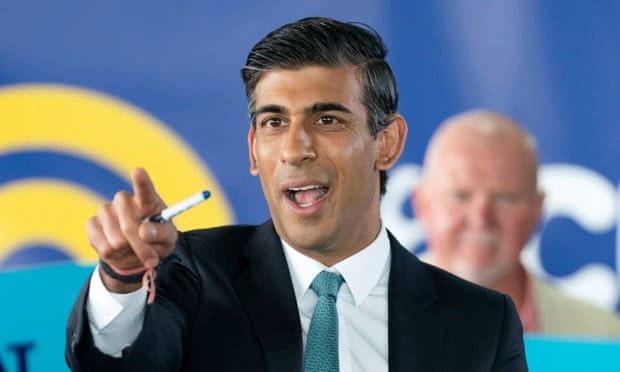 Rishi Sunak has promised to scrap VAT on household fuel bills for a year to tackle the cost of living crisis, in a dramatic U-turn, as he battles to remain in the race to become the next prime minister.

With Truss promising £30bn in immediate tax cuts, Sunak has repeatedly stressed the risks of unfunded promises, and insisted he has already taken action to cushion the blow of the sharp increase in domestic energy bills expected in October.

But as he continues to trail the foreign secretary in polls of Tory members, and with ballot papers landing within days, he announced a new handout, worth £160 for every household – despite having previously condemned the policy.

“As chancellor I knocked £400 off everyone’s energy bill and provided support of £1,200 for the most vulnerable households. This additional VAT cut will help deal with the current emergency,” Sunak said, claiming it was a benefit of Brexit that he was able to take the measure.

He added: “This temporary and targeted tax cut will get people the support they need while also – critically – bearing down on price pressures.”

“DWP will shortly change the rules to ensure people keep looking for extra work until they have at least 12 hours a week with an ambition to increase that in the future, she said. “DWP had hoped to get this under way earlier this year but unfortunately was blocked by the former Chancellor.”

The new pledge came as analysis by thinktank the Resolution Foundation suggested personal tax cuts, such as those being promised by Truss, are “not a serious answer,” to the cost of living crisis.

“Rising energy bills will bite hardest for low- and middle-income households this winter, but only 15% of the cost of scrapping the national insurance rise would go to the poorer half of the population, while 28% would go to the top 20th,” the thinktank says.

After the pair squared off repeatedly over tax and spend in Monday’s bad-tempered BBC leadership debate, a snap poll of Tory members by YouGov suggested 50% thought Truss performed better, against 39% for Sunak.

On dealing with the cost of living, 55% thought Truss was better, against 34% for Sunak.

As chancellor, Sunak repeatedly resisted pressure to scrap VAT on domestic fuel bills. Speaking to MPs in February, he said, “I know that some in this House have argued for a cut in VAT on energy. However, that policy would disproportionately benefit wealthier households.”

Pat McFadden MP, Labour’s shadow chief secretary to the treasury, said: “will the real Rishi Sunak please stand up? Once again he’s acting as his own personal rebuttal unit – attacking a policy for months then adopting it.”

Instead of cutting VAT, Sunak opted to offer help to households through a council tax rebate, and a £200 reduction in energy bills that was set to be repaid in future years.

Amid concerns in cabinet that he had not done enough to meet the scale of the crisis, he then announced a fresh package of support, including a £400 cut in bills that is now not repayable, with up to £1200 available for the poorest households.

With the energy price cap that determines domestic bills now expected to exceed £3000 in October, there was a growing consensus that more action would need to be taken by the incoming prime minister.

In the increasingly bitter leadership contest, Sunak has previously sought to paint himself as the guardian of fiscal responsibility, attacking Truss’s £30bn package of unfunded tax cuts as “socialist”, as the pair clashed repeatedly over tax and spend.

His team stressed that while the new tax cut would cost £4.3bn, it would be a one off measure, starting in October and lasting 12 months, which would therefore not having a lasting impact on the public finances.
Sunak’s latest promise came as part of what his campaign team called his “Winter Plan” to deal with inflation and the cost of living.

Alongside the temporary VAT cut, it included two other measures apparently only loosely related to the immediate crisis – a tightening of benefit rules, and a pledge to reduce the UK’s dependence on French ports.

Sunak said he would double the amount of hours someone in receipt of benefits must work, before they are no longer obliged to attend meetings with work coaches at the local jobcentre, and to keep looking for a full-time role. Currently this is nine hours, and he would increase it to 18.

He also said he would “work with Britain’s biggest importers,” to encourage them to use Dutch and Danish ports, instead of French ones.

It is unclear whether Sunak would be offering taxpayer-funded support to aid this switch, but it would be aimed at alleviating supply-chain bottlenecks caused by post-Brexit delays at Dover.

Sunak and Truss are due to face each other at a party hustings in Leeds on Thursday – the first of a dozen such events, in the lead-up to the 5 September announcement of the result of the leadership contest.