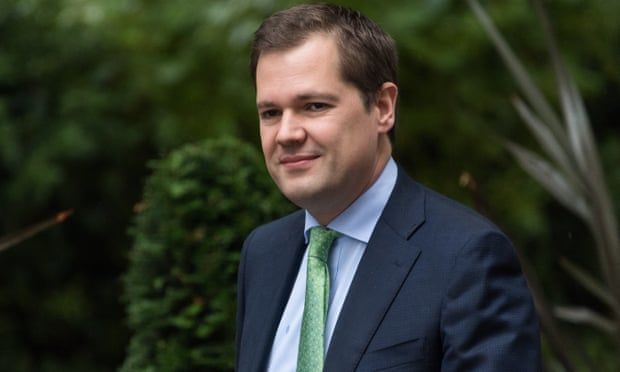 Tory MP hits out at ‘overly bureaucratic’ process for resettling refugees, saying visas took too long
The former cabinet minister Robert Jenrick has criticised the scheme to resettle refugees from Ukraine as “overly bureaucratic”, after he is thought to have become the first MP to welcome a Ukrainian family to Britain.

He described the process by which Maria, 40, and her two children, Bohdan, 15, and Khrystyna, 11, had got to the UK as “traumatic”. The children’s father has stayed in Ukraine to fight the Russian invasion, as is the law there.

Speaking on the Daily Telegraph’s Chopper’s Politics podcast, he said: “It has been a very difficult experience for them. Even the experience of coming here was traumatic.

“They spent seven hours queueing at the Polish border before they were able to finally leave Ukraine, catch the flight to the UK, and the experiences which they’ve had, and their relatives have had, in different parts of the country over the last two or three months are really harrowing.”

On the visa process, he said: “Truth be told, it has been a bumpy start to the scheme. It’s taken too long to get visas, for us it took about three weeks to get all three visas approved.

“And so there are people who are frustrated, it has tested the patience of sponsors and, more importantly, of the families and individuals themselves.

“But having been involved in some schemes that are not dissimilar to this in the past, like the Hong Kong scheme, Syrian scheme, Afghan scheme as a minister, as communities secretary, I know that. But I do think that we will get over those bumps, we are getting over them now.”

He added: “There were simple things that we could and should have done from the outset, like having the form in Ukrainian, for example. And I’m not sure whether you need to be doing checks on minors who are extremely unlikely to be threats to this country.”

He said some security checks were needed, but added: “The checks need to be done quickly and in this case I’m afraid it has taken too long.”

Jenrick said he had not yet received the £350 he is entitled to for hosting the family under the government’s Homes for Ukraine sponsorship scheme. If he is offered it, he said he would either not accept it or pass it directly to the refugees.

Several MPs and ministers have said they have applied to host families.

Earlier this month, the Conservative MP Duncan Baker said he had welcomed a mother and her son. “So far … it’s been very rewarding to see them feeling safe at last after a very traumatic experience and beginning to stabilise them and rebuild their lives,” Baker said.

Hancock described the visa process as a “challenge”.

By Monday, about 16,400 people had arrived in the UK under Ukraine visa schemes, according to government figures, with 13,200 arriving under the Ukraine family scheme, and 3,200 under the Homes for Ukraine scheme.

For both schemes 94,700 applications had been received, and 56,500 visas granted by Thursday, said the Department for Levelling Up, Housing and Communities, and the Home Office.
Add Comment