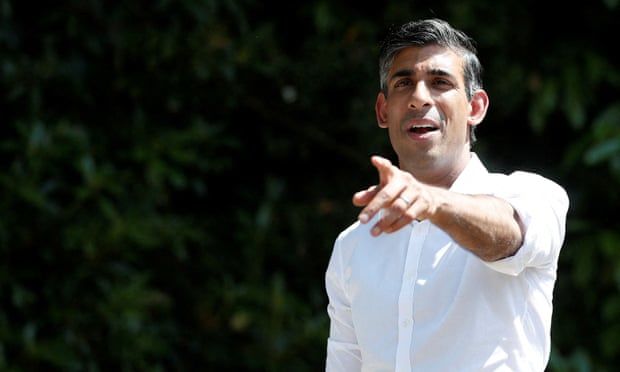 With Liz Truss the firm favourite ahead of a critical few days in the leadership contest, and ballot papers set to be received by Conservative party members from Monday, Sunak will give a speech attacking “woke nonsense”.

While the former chancellor came first in a vote of Tory MPs, Truss has consistently led in party members’ polls and won the endorsement of former favourite Ben Wallace on Thursday, underlining the sense that her campaign is picking up momentum. On Friday night it was also announced that her former leadership rival Tom Tugendhat, who popular among Conservative party members and a senior figure in the One Nation group of centrist Tory MPs, would back Truss. He praised her plans for tax cuts, saying they were “founded on true conservative principles”.

Sunak has taken up a series of increasingly hardline positions in a bid to close the gap with his rival.

Addressing members in West Sussex on Saturday, he will say: “What’s the point in stopping the bulldozers in the green belt if we allow leftwing agitators to take a bulldozer to our history, our traditions and our fundamental values?

“Whether it’s pulling down statues of historic figures, replacing the school curriculum with anti-British propaganda or rewriting the English language so we can’t even use words like ‘man’, ‘woman’ or ‘mother’ without being told we’re offending someone?”

Sunak will say that a government led by him would review the 2010 Equality Act and associated guidance to make clear that “sex means biological sex”.

He will also pledge to put guidance on relationships and sex education on to a statutory footing to ensure children are “shielded from inappropriate material”.

Questioned about the issue by an audience member, Truss said: “I’ve been very clear that single-sex spaces should be protected, particularly for young people, as well as vulnerable people … as prime minister I would direct that to happen, because it’s a difficult time being a teenager, being a young girl, and you should be able to have the privacy you need in your own loo.”

While Sunak will insist “we have zero interest in fighting a so-called culture war”, his announcement appears to be a fresh bid to enthuse Tory grassroots by talking tough on controversial issues as he fights to remain in the leadership race.

Already in recent days, Sunak has promised to ban building on the green belt, cap the number of refugees the UK will accept and double deportations of foreign criminals. He also said he would slash VAT on domestic fuel to help tackle the cost of living crisis, in a reversal of his previous position.

With the contest to become PM increasingly hard-fought and acrimonious, both campaign teams issued statements on Friday condemning the leak of government documents and promising to report any such leaks to the cabinet secretary, Simon Case.

Two sources suggested Case asked for such statements to be released amid concerns about sensitive cabinet discussions being used for political purposes.

After Truss was widely viewed as having performed more strongly in Thursday’s hustings in Leeds, a senior supporter of the foreign secretary claimed some of Sunak’s backers were now turning on him.

The source said Sunak’s backers were “kicking themselves” and had believed he was “going to walk this and that’s why we backed you, but you’re fucking it up”.

Sunak has been more cautious in setting out tax and spending plans than Truss, promising Tory members he will not indulge in “fairytales”.

But with surveys of members suggesting Truss has a commanding lead – 62% to 38% according to a YouGov poll last week – some of his supporters are now urging him to be more forthright.

“He’s got to be absolutely ruthless: she’s getting away with blue murder at the moment on all sorts of fronts,” said one former cabinet minister who is backing Sunak.

Speaking about Truss’s poll lead, they added: “If he doesn’t get it to something more like neutrality in the next few days, it will start to set in concrete.”

Despite having backed Boris Johnson to the last, Truss has presented herself as the change candidate, offering a break in economic policymaking – including more than £30bn of unfunded tax cuts.

She told reporters on a visit to Norfolk on Friday: “What is risky is carrying on on the same economic path, which is currently forecast to lead us to recession. That is the risk. What I’m talking about is unleashing opportunity, unleashing growth, keeping taxes low.”

Asked if she was confident of winning the contest, the result of which will be announced on 5 September, she said: “I’m not at all complacent. I’m fighting for every vote across the country.”

Both candidates are crisscrossing the UK, meeting hundreds of Conservative members every day, with another 11 hustings to come as well as scores of smaller-scale events in town halls, pubs and back gardens.

Truss’s team insisted she would go “full pelt” through the remaining month of the contest, and was only taking one day off in the next three weeks.

“She’s loving it,” said a source on her team, who conceded she had not enjoyed the ill-tempered television debates but relished meeting members.

Sunak addressed Tory members in Tunbridge Wells on Friday, following hot on the heels of Truss, who paid a visit to the Kent town last weekend.

His key messages were “blue meat” policies aimed at motivating the membership, including the pledge to block housebuilding on the green belt. Sunak also insisted he would be better-placed than Truss to lead the Tories to victory at the next election.
#Boris Johnson  #Johnson
Add Comment