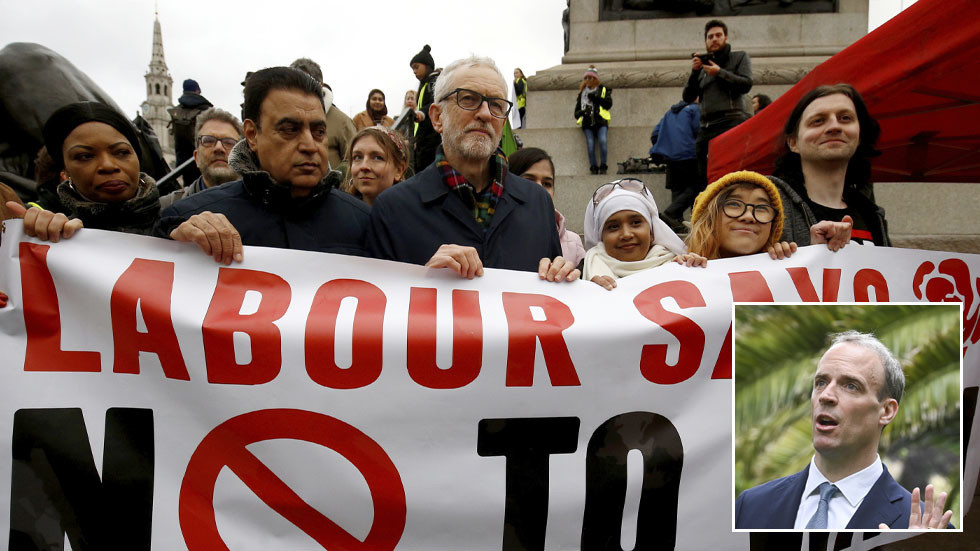 Raab claims ‘no one saw’ fall of Kabul coming, Twitter wonders if he ever heard Jeremy Corbyn's warnings against war?

Dominic Raab says his government was among the many surprised by the Taliban’s lightning capture of Kabul, an event he claims “no one saw coming.” Some people have begged to differ, citing anti-war activists like Jeremy Corbyn.

The UK foreign secretary went on Sky News on Tuesday to reiterate that the UK was as surprised as any other nation by the Sunday fall of Kabul.

“I haven’t spoken to an international interlocutor, including countries in the region, over the last week, who hasn’t been surprised,” the minister said. He added that many factors, including the unwillingness of the NATO-trained Afghan troops to fight the Taliban on their own, combined to produce the chaotic outcome, declaring:

"No one saw this coming."

While it’s true that many security analysts vastly underestimated the time it would take the Taliban to take full control of the country after NATO’s withdrawal, it’s hard to argue that nobody warned about a disaster waiting to happen at the end of the Alliance’s 20-year Afghanistan presence – and social media pundits were quick to bring it up.

As the Taliban forces were making their final push towards Kabul, old warnings by various prominent anti-war voices were widely shared on social media. In the US, the 2012 ‘What If’ speech by outgoing libertarian congressman Ron Paul was a popular choice.

In the UK, the arguments against continued Afghanistan occupation made a decade ago by rebellious former Labour leader Jeremy Corbyn resurfaced.

Corbyn has long been a vocal critic of NATO’s military adventures in the Middle East, so there is a wide assortment of footage showing him advocating a pullout of foreign forces from Afghanistan on various platforms.

“Think back to the 1960s, 1963 to be exact,” Corbyn told RT in a 2010 interview. “The US sent in military advisers – and then support forces – into Vietnam. Five years later they’d have half a million troops there fighting a full-scale war in Vietnam. Ten years after that they had to retreat from Vietnam with ignominy.”

"I think that is the process that we are going down in Afghanistan."

But one doesn’t have to go back to 1975 to find a precedent of a US-backed and trained military buckling virtually in an instant under pressure from hostile insurgents. In 2014, exactly that happened in Iraq, when the government forces were routed by advancing Islamic State (IS, formerly ISIS) fighters.

The terrorists managed to capture the country’s second-largest city of Mosul and posed a real threat to Baghdad, before US air support turned the tide. Mosul was reduced to rubble by the US-led forces trying to push them out.