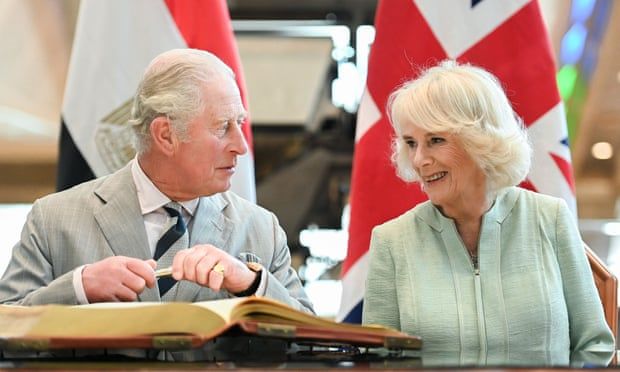 Analysis: The duchess once portrayed as a ‘rottweiler’ has not put a foot wrong as a royal, close observers say
A once vilified royal mistress perceived as a threat to the stability of the monarchy, Queen Camilla, as she will be crowned, is now seen as a guarantor of that institution’s future smooth running.

The Queen clearly believes the Duchess of Cornwall possesses key traits of past successful consorts, such as quiet supportiveness and a determination not to outshine the principal.

The monarch stressed in her 70th accession day message – when she expressed her “sincere wish” that Camilla would be queen consort – the crucial support she and her father had received in marriage. “I was blessed that in Prince Philip I had a partner willing to carry out the role of consort and unselfishly make the sacrifices that go with it. It is a role I saw my own mother perform during my father’s reign,” she said.

Hugo Vickers, the royal historian and author, said: “I think that was probably one of the strongest points that the Queen made.”

Seventeen years after Camilla – whom the Queen reportedly once referred to as that “wicked woman” – married Prince Charles, her public image is worlds away from “the rottweiler” she was portrayed as after the death of Diana, Princess of Wales.

Those who have observed her transformation at close quarters believe she has not put a foot wrong as the royals’ second most senior woman, and will not do so as queen consort.

“When you consider how horrible people were about her before she married Prince Charles – they hurled abuse at her, they accused her of everything – she is not vindictive or vengeful,” said Vickers. “She has never given a hint of being anti anyone who was nasty about her before.

“She seems to have a laid-back quality, which I think comes from what you might loosely call the Gloucestershire hunting set, which is a world of its own, where they rise above the jibes of the media and just get on with life.”

When Camilla has publicly addressed the abuse, it has been with humour. The broadcaster Gyles Brandreth once recalled an occasion when, as president of the Oscar Wilde Society, he invited her to make a toast at the group’s annual meeting. She plunged in: “There is only one thing in the world worse than being talked about and that is not being talked about,” quoting Wilde, before adding to laughter: “One of the few maxims of the great 19th-century writer Oscar Wilde that I am not sure I would entirely agree with.”

The BBC’s former royal correspondent Peter Hunt believes Camilla has played a “canny game”. “She has kept the media close and the Daily Mail even closer,” he wrote.

She is far more relaxed with the media than Charles, those who cover the royal family would attest, joking with photographers, and happy to comply with requests for quotes on subjects she feels strongly about. “She understands the game and gives them what they want without losing any dignity in the process,” Vickers said.

Subjects close to her heart include promoting literacy, and the campaign highlighting violence against women, the latter a particularly gritty subject that she has embraced and championed, often well away from the cameras. As the daughter of a major, she is well schooled in the military, which is also a handy attribute for a queen.

She has progressed from being a nervous bride – evident at the blessing of her 2005 marriage to Charles at St George’s chapel, Windsor – to confidently undertaking her own solo engagements.

But it is at Charles’s side where, observers have noted, she is particularly effective, and will remain so when he becomes king.

“Prince Charles has very good qualities, he also has occasional tendencies towards petulance. And I know she is very good at defusing that,” said Vickers. He recalled one incident when Charles was taken aback as someone suddenly shook his hand. Charles did not immediately respond, “but her hand shot out and with ‘how very nice to see you again’ she just defused the thing completely”.

“I think all she really wants to do is make things easier for him. I don’t think she’s got any particular personal ambitions. There is no evidence she will be political at all. She will not outshine him. And he looks much more relaxed. She’s matter-of-fact and straightforward, and that’s exactly what he needs.”

Charles now has what he wants. As the Queen once reportedly drily observed of the special nugget of Welsh gold used for royal wedding rings: “There is very little of it left – there won’t be enough for a third wedding.”
Add Comment