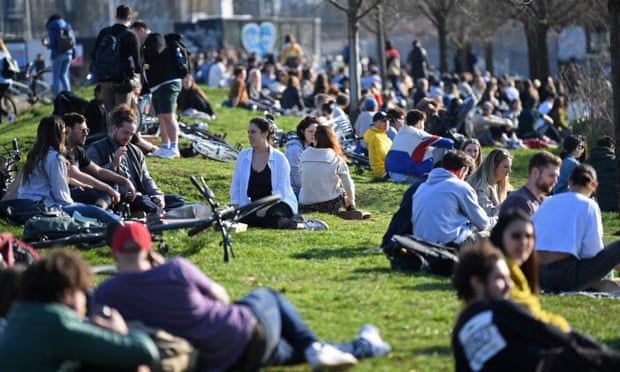 Large crowds could be seen at Hove seafront and Greenwich park in London, as temperatures reached 14C and 15C in parts of the UK.

As the warm weather approached, police urged people to adhere to lockdown guidelines, which allow people to exercise but not to meet up socially in groups.

“There are concerns that after a long year of restrictions, falling infection rates, the vaccine rollout, better weather and the roadmap out of lockdown earlier this week, that people may get complacent. But the rule of 6 or 2 families doesn’t begin until 29 March,” the force said.

In Wales, police carried out spot checks on Saturday in an attempt to deter people from driving to beauty spots in the warm weather.

People face fines of £60 for breaking the stay-at-home order in place, which bans all non-essential travel. Exercise must be “undertaken locally” and people are not allowed to drive to a location to exercise, except in limited circumstances.

Alun Michael, the police and crime commissioner for south Wales, urged people “not lose all the gains that have been made”.

“There’s a great temptation this weekend, we have great weather and sport going on and this is really a big plea to say, please let’s not mess it up,” he said.

The deputy chief medical officer for England, Prof Jonathan Van-Tam, also urged people not to “relax” as the warm weekend approached, warning that “this is not a battle that we have won yet”.

Speaking at a Downing Street press briefing on Friday, Van Tam implored the public: “Do not wreck this now”.

According to the Met Office, people in England and Wales would see “barely a cloud in the sky” across much of the afternoon.

Northern Ireland and western Scotland saw cloudier skies, but in the east, Aberdeen was forecast to see the highest temperatures of the day at 15C.

Temperatures will cool on Monday, with the Met Office tweeting that people should “make the most” of the milder weather on Saturday and Sunday before the drop in temperatures.
#vaccine
Add Comment