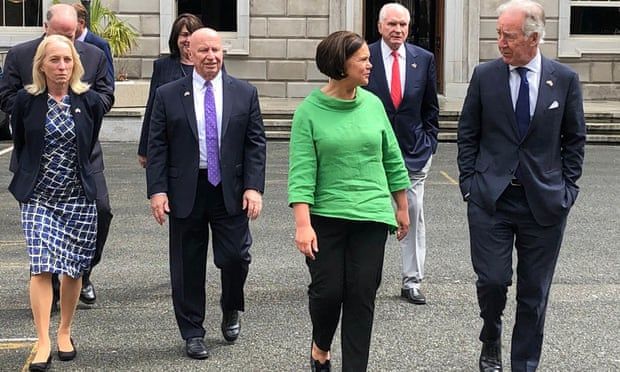 Unionists have responded with scorn and scepticism to a US congressional delegation that is attempting to shore up support for the Northern Ireland protocol.

The Democratic Unionist party (DUP) led accusations on Monday that the nine-strong delegation, which includes Democrats and Republicans from the House of Representatives and Senate, was partisan and out of touch.

“We’re dealing with more American politicians who are one-sided,” Gordon Lyons, an economy minister in the mothballed Stormont executive, told the BBC. “We’re going to have a particular challenge with Congressman Neal,” he said, referring to Richard Neal, the chair of the ways and means committee.

Others such as Jamie Bryson, a prominent loyalist, went further and accused Neal, an ally of President Joe Biden, of supporting the IRA. “We aren’t going to be dictated to by some foreign politician acting as a surrogate for republicanism,” he tweeted.

The American visitors are in Ireland at the end of a six-day trip to Europe that included meetings with the EU’s Brexit commissioner, Maroš Šefčovič, in Brussels and the UK foreign secretary, Liz Truss, in London.

The visit has been dominated by the protocol, a part of the UK’s 2019 divorce treaty with the EU which avoided imposing a trade and customs border on the island of Ireland by placing it in the Irish Sea. Unionist leaders say it damages the economy and undermines the region’s position in the UK.

The Americans have said London not to unilaterally rip up parts of the protocol, saying that would violate the Good Friday agreement, which underpins peace in Northern Ireland, and wreck any potential trade deal with the US.

“I think it’s best whenever there is a difference of view to sit down across the table and negotiate towards a common purpose. That is the history we celebrate when we think about the benefits of the Good Friday agreement,” the Democratic congressman Dan Kildee told RTÉ.

The delegation met the Sinn Féin leader, Mary Lou McDonald, and the taoiseach, Micheál Martin, on Monday. Both lauded the visitors, reflecting a united front between Dublin and Washington on the protocol. “Negotiation, not unilateral action, the way forward,” Martin tweeted.

On Tuesday Neal is to address the Seanad, the upper chamber of the Irish parliament.

The delegation is scheduled to meet DUP leaders before returning to the US on Wednesday. It promises to be a frosty encounter. In public and private, unionists have accused the Americans of refusing to recognise that the protocol is rejected by most unionists and thus undermines the Good Friday agreement.

On Sunday Sir Jeffrey Donaldson, the DUP leader, said the delegation’s call for full implementation of the protocol was folly. “Implementing the protocol in full means ending grace periods, with an economic tsunami hitting Northern Ireland. Power-sharing only works with cross-community consensus.”

The DUP has thwarted the formation of an executive and assembly at Stormont in protest at the protocol.