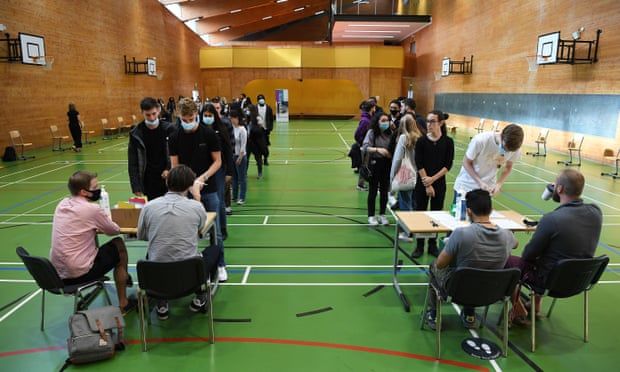 Universities looking to stabilise numbers after Covid surge, says Ucas, while grappling with increase in number of 18-year-olds
The offer rate for A-level students applying to leading universities has dropped significantly, with medicine and dentistry courses even harder to get on to than in previous years, according to data from the Ucas admissions service.

Higher-tariff universities, including those in the research-intensive Russell Group, have tightened up their offers, with the proportion of applications that result in an offer down from 60.5% in 2021 to 55.1% this summer.

Meanwhile, fewer than 16% of applications to study medicine and dentistry – which are among the most competitive courses – resulted in an offer this year, down from 20.4% in 2021, leaving some of the country’s highest-achieving students disappointed.

The figures, released on Wednesday, confirm Guardian reporting last week that found many students predicted A* in their A-levels, who in previous years would have received offers from many of their preferred institutions, have instead received a string of rejections.

According to Ucas, universities are seeking to stabilise student numbers after a surge over the last two years amid the Covid pandemic. The overall offer rate stands at 66.4% compared with 72% in 2019, before the pandemic.

The Ucas chief executive, Clare Marchant, said the trend was likely to continue in the coming years, as universities grapple with growing numbers of applications due to an increase in the number of 18-year-olds in the UK population. This is projected to continue for a decade, rising 2-3% almost every year. International student numbers are also growing.

She said, the 667,000 applicants in 2022 making almost 3m applications were “both records for this point in the cycle, and likely to be exceeded each year for the foreseeable future. A million applicants by 2026 remains a very real prospect.”

Writing in a blog for the Higher Education Policy Institute, Marchant said: “Universities and colleges have responded to the increase in applications by exercising more restraint in their offer-making.

“And some universities are choosing to stabilise their student numbers following growth over the last two years. This means the overall offer rate is 66.4%, compared to 72% in 2019, and this is also an indication of future cycles as universities and colleges adapt to having more applicants.

Marchant said, although offer rates had declined overall, applicants from the most disadvantaged backgrounds were the least affected, with a smaller reduction from 78.8% last year to 75.1%. This is likely to be determined by the type of institutions and courses students are applying for.

“However, the stark gap between the most and least advantaged persists, with an 18-year-old living in an advantaged area being 2.86 times as likely to hold a firm choice as their counterpart in a disadvantaged area,” Marchant wrote.

More than 43% of the UK’s 18-year-olds applied for university by the January deadline. According to Ucas, 281,500 of them are holding a firm offer, up 7,000 on last year and the highest on record, of whom 117,000 are holding offers at higher-tariff providers – the second highest figure on record.

“Every year there is competition for places at the most popular universities and on the most popular courses, but government works closely with the higher education sector to ensure students are able to progress to high-quality courses that lead to good outcomes.”
#Covid
Add Comment