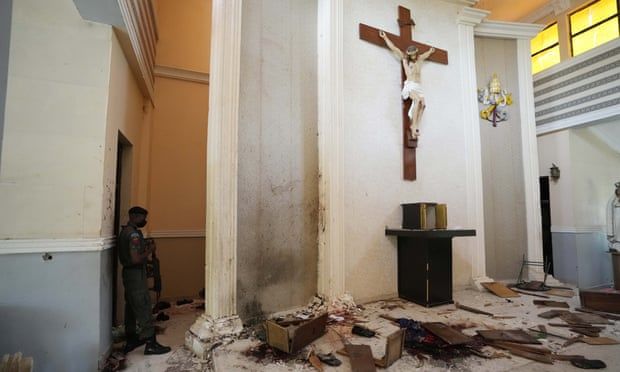 Witnesses describe how attackers detonated explosives and shot at those who tried to flee
Workers cleared the pools of blood and pieces of broken pews at the Saint Francis Catholic church in south-west Nigeria on Monday, as the local community mourned more than 50 parishioners shot dead in the final moments of mass a day earlier.

No one has claimed responsibility for the killings, and Nigeria’s authorities and the police have not named any suspects.

But new details of the brazen attack emerged on Monday, as authorities and witnesses described how the unidentified assailants detonated explosives and opened fire through the windows as the ceremony ended, before entering the church and shooting at those who tried to flee from two of three exits. The attack lasted for about 20 minutes and left scores wounded.

Steven Omotayo, who lives near the church, rushed to the scene when he heard the gunshots. “I saw a lot of dead bodies – both young and old, even children,” he said.

The Catholic bishop of Ondo state, Jude Ayodeji Arogundade, also rushed to the church after the attack. “It was beyond what I ever imagined. A lot of bodies right there in the church, blood-soaked bodies,” he told local broadcaster, AIT television.

At a nearby hospital scores of wounded people, some being comforted by their families, were being treated in threadbare hospital conditions, many laying in blood-soaked bandages. Alex Michael was shot in the leg while protecting his children. “Immediately they entered and started firing everywhere, so many people,” he told Reuters.

One doctor told the AP: “Even as a physician, I have attended to a good number of casualties but what I saw yesterday was far beyond whatever I have seen before in my life.”

Pope Francis and other world leaders expressed horror and sympathy. Ondo state governor Arakunrin Akeredolu said on Monday that flags in the state would be flown at half-mast for a week. Nigerian government officials, led by President Muhammadu Buhari, have condemned the killings. “No matter what, this country shall never give in to evil and wicked people, and darkness will never overcome light. Nigeria will eventually win,” he said in a statement yesterday.

Yet many in Nigeria are tired of waiting. Owo, a relatively peaceful town, is now the latest site of a mass killing or major attack – such events are occurring frequently, as multiple security crises overwhelm the country’s security agencies. About 3,000 people were killed by armed groups in Nigeria in the first three months of 2022, according to the Council on Foreign Relations. State police commissioner Oyeyemi Oyediran said security forces, including the military, pursued the attackers, “but unfortunately, we could not catch up with them”.

Some residents and lawmakers said they believed the attack was carried out by ethnic Fulani terrorists, sometimes known as bandits, who have staged relentless attacks predominantly in northern Nigeria but also in other parts of the country.

The groups emerged from a historical conflict between pastoralists and local communities over access to land and encroachments on private farms, and have carried out mass killings and kidnappings, exploiting a lack of rural security across the country.

Adeyemi Olayemi, a lawmaker in Ondo, said the atrocity was probably “a reprisal” in retaliation for recent restrictions by the state government on grazing in Ondo, including in forests where the assailants have carried out attacks. The restrictions were adopted after an increase in kidnappings in the state and reports of attacks and cattle encroachments on private farms.

Yet a rise in violence by various heavily armed groups, including jihadists who are increasingly active in north-west and central Nigeria, have added to the uncertainty and fears that multiple actors could be responsible.
#Pope Francis

Oh ya 233 days ago
My guess is someone who has Mohammed in his name. You know the same Mohammeds the western world is welcoming into their countries. There are parts of western cities that non Mohammeds can not enter. Nice. thank your leaders
View all comments (1)Add comment