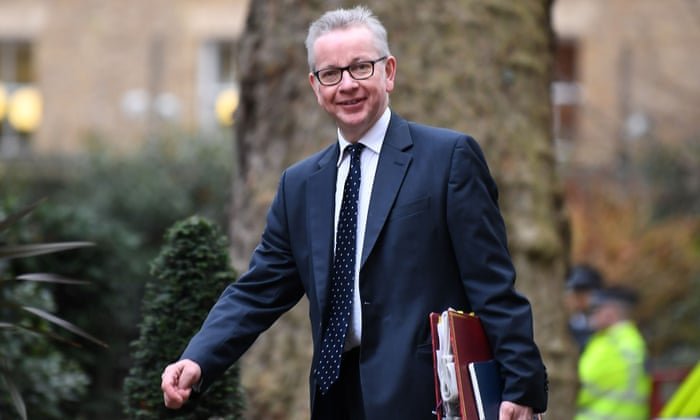 Michael Gove has told businesses that trade with Europe they need to prepare for “significant change” with “inevitable” border checks for “almost everybody” who imports from the EU from next year.

In the first official confirmation that the government is going to impose trade barriers post-Brexit, he warned there would be checks on food and goods of animal origin, plus customs declarations and mandatory safety and security certificates required for all imports.

“You have to accept we will need some friction. We will minimise it but it is an inevitability of our departure,” he told delegates at a Cabinet Office event held in central London on Monday, entitled Preparing Our Border for the Future Relationship.

“I don’t underestimate the fact that this is a significant change, but we have time now to make that change.”

Gove, who as chancellor of the Duchy of Lancaster is de facto deputy prime minister, also warned delegates it could take five years to get a smart border involving online processes up and running and said businesses had to be ready for the change next January, whatever the outcome of the next phase of Brexit negotiations.

“In questions and answers his officials talked of an ‘operational border’ from the beginning of 2021, which they said was laying the foundation for best borders in 2025,” said one delegate, who reported that Gove had warned the UK must be ready for the completion of Brexit on 1 January next year when the transition period ends.

Later the government issued an official update confirming checks on both imports and exports.

The update warned that the “policy easements put in place for a potential no-deal exit will not be reintroduced as businesses have time to prepare”.

The “easements” that will not apply include deferred VAT payments on imports, which the government had considered in a no-deal plan.

Echoing Boris Johnson’s comments in a speech last week, Gove spoke of pursuing a Canada or Australian-type deal, which EU trade commissioner Phil Hogan has said was “code for no deal” as the bloc does not have a deal with Australia.

According to attendees, Gove was also adamant that the government would stick to its vow to no longer follow EU rules that would allow it to minimise future barriers in cross-border trade.

However, Gove did seem to distance himself from recent comments by the chancellor, Sajid Javid, that suggested business should stop complaining about future trade barriers as they have known about Brexit since 2016.

The Food and Drink Federation raised concerns about the lack of time to deliver the plans adding that “any additional friction into the UK-EU trading relationship will inevitably have a cost for businesses, consumers and shoppers”.

It called on the government to “lead the way” and “proceed at pace” to start building the border inspection posts and ensure regulators such as the Food Standards Agency have sufficient resources for “these new responsibilities”.

Elizabeth de Jong, the Freight Transport Association’s UK policy director, said: “Gove put to rest Javid’s assertion that industry had plenty of time to prepare. It is encouraging for industry that he said he does not underestimate what needs to be done.”

She also raised concerns that the IT systems would not be ready until 2025. “We are naturally disappointed that the promise of frictionless trade has been replaced with a promise that trade will be as seamless as possible but not until 2025, with a more realistic but costly ‘make do and mend’ approach to be employed until then.”

Richard Ballantyne, chief executive of the British Ports Association, said: “We may not like what we are hearing, but if you get a clear message than you can plan.”

Jill Rutter, senior research fellow at UK in a changing Europe tweeted that the move will see a “massive increase in red tape”.

This will at a stroke remove any benefits from any business trading with the EU of @sajidjavid red tape challenge.. this is a massive increase in red tape... https://t.co/xc704Ql5Iu

Gove’s address is the first official confirmation on the detailed border checks to come, something industry leaders particularly in car manufacturing and in agriculture have campaigned against.

He told the London event it was the government’s aspiration to make sure trading with the EU was “as smooth and trouble free as possible” but that “we also need to ensure that people are ready for the regulatory checks that will follow”.

He told them “it is the case there will be [sanitary and phytosanitary] checks” for those trading food or goods of animal origin.

“It is likely as is the case with [the Canadian trade deal] that there will be some physical checks of those products as well and it will be the case that we will almost certainly need safety and security certificates as well,” he said.

“It will be the case almost everybody who is exporting will need to complete customs declarations.”