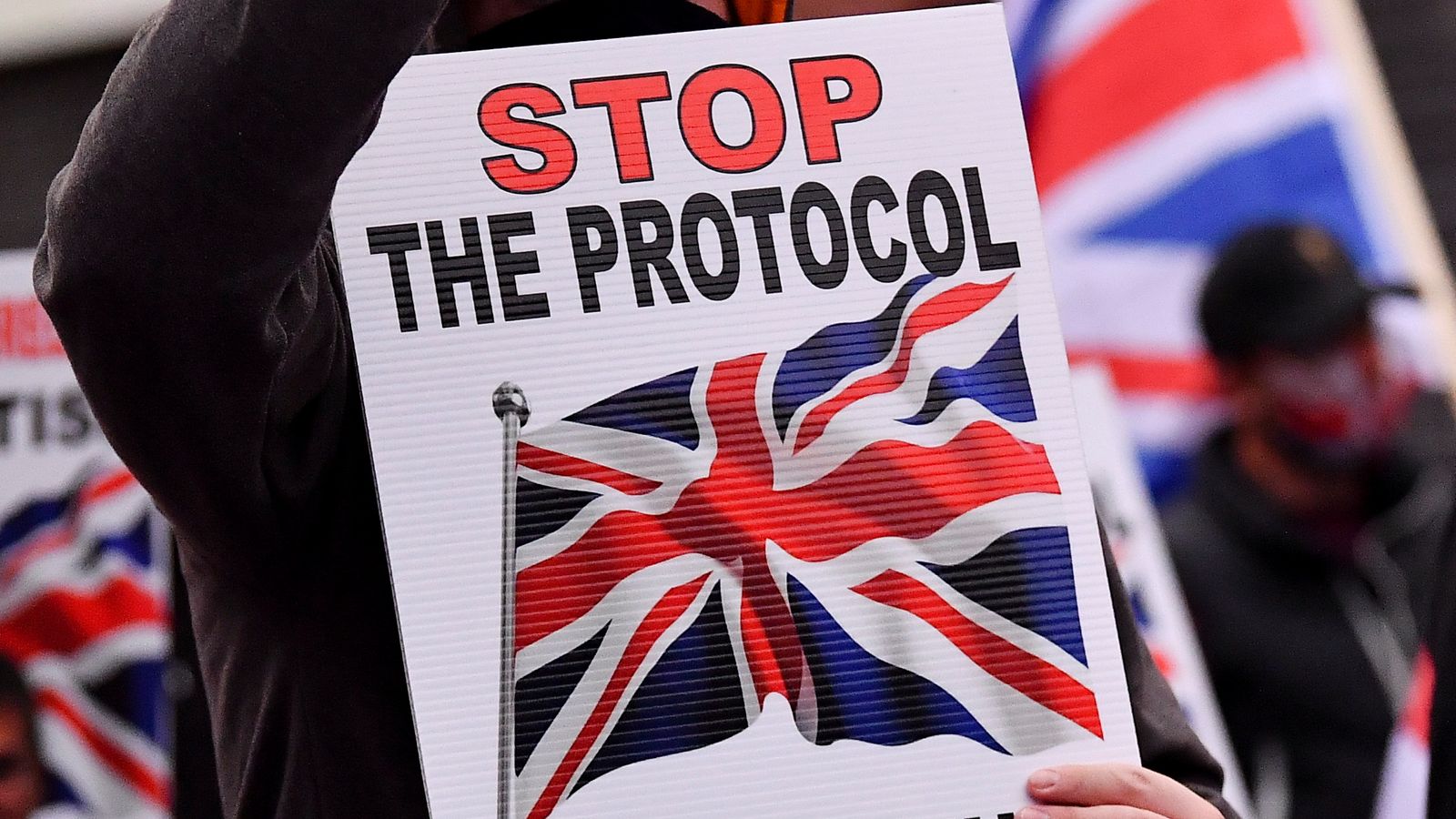 Since the Brexit transition period ended on 31 December 2020 the protocol has been a point of friction between Westminster, Belfast and the EU.

The UK will have "no choice but to act" if the EU does not show the "requisite flexibility" over the Northern Ireland Protocol, Liz Truss has warned.

Following a call between the foreign secretary and European Commission Vice-President Maros Sefcovic, a foreign office spokesperson said that Ms Truss made clear that the arrangement was "the greatest obstacle" to forming a new Northern Ireland executive.

"The foreign secretary noted this with regret and said the situation in Northern Ireland is a matter of internal peace and security for the United Kingdom, and if the EU would not show the requisite flexibility to help solve those issues, then as a responsible government we would have no choice but to act," a spokesperson from the department said.

The phone call between Ms Truss and Mr Sefcovic was described by one source as "tetchy".

Downing Street said "no decisions have been taken" with regards to the protocol, adding: "We will continue to see what, if any, progress can be made."

Boris Johnson, speaking during a cabinet away-day in Stoke-on-Trent, said - when pressed on whether the wording of the protocol needed to be changed: "We need to get the Executive, we need to get the Government of Northern Ireland up and running - and that's vital."

When asked if he was side-stepping the question, the PM said: "No, not at all, it follows since it's clear that the Unionist community won't accept the Protocol, that's I'm afraid obvious from what has happened, we've got to fix it, and we'll have to."

Following the conversation between Ms Truss and Mr Sefcovic, the European Commission vice-president said it was "simply not acceptable" for the UK to threaten to unilaterally suspend parts of the Northern Ireland Protocol.

"It continues to be of serious concern that the UK Government intends to embark on the path of unilateral action," Mr Sefcovic said.

He added: "Such unilateral action will also undermine the conditions which are essential for Northern Ireland to continue to have access to the EU single market for goods."

Since the Brexit transition period ended on 31 December 2020 the protocol has been a point of friction between Westminster, Belfast and the EU.

The UK and EU agreed to put the mechanism in place after Brexit to avoid the introduction of a hard border between Ireland and Northern Ireland.

Lorries can continue to cross the border from Northern Ireland into the Republic without having paperwork and goods checked - as they did when the UK was in the EU. 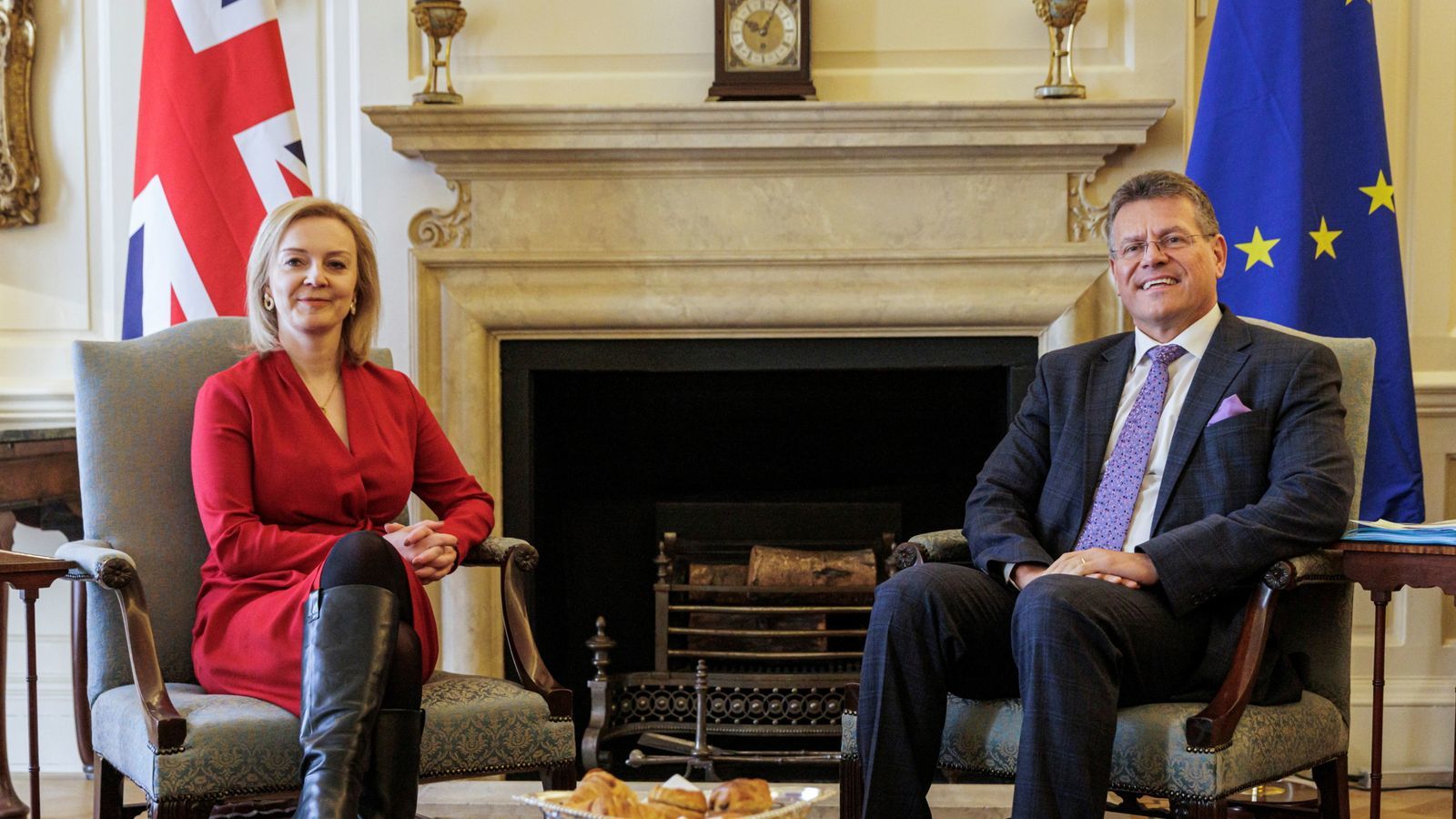 But in order to protect the integrity of Europe's single market, products from Great Britain entering Northern Ireland have had to undergo EU import procedures at the ports, effectively creating a new border in the Irish Sea.

That is something Boris Johnson had promised would not happen and is particularly opposed by unionists - though they and the UK government say the implementation of the protocol is creating dificulties for businesses and consumers across Northern Ireland's communities.

The issue was brought to a head by last week's Northern Ireland assembly elections, in which the nationalists of Sinn Fein became the largest party for the first time.

But the DUP - the largest unionist party - must agree to share power for a new administration to get up and running, something it says it will not do until the protocol issue is ironed out.

Earlier on Thursday, senior government figures close to the negotiations between the UK and the EU over the protocol told Sky News they did not expect an agreement to be reached.

UK Attorney General Suella Braverman is said to have approved the scrapping of swathes of the agreement, giving Mr Johnson legal cover to make the move, despite warnings from Joe Biden's White House and European leaders not to single-handedly meddle with the terms.

Sky News understands that legal advice has been drawn up and shown to some cabinet ministers.

Earlier this week, the foreign secretary had warned she would "not shy away" from taking action as she accused the EU of proposing solutions that would "take us backwards".

Officials working for Ms Truss are drawing up draft legislation to unilaterally remove the need for checks on all goods being sent from Britain for use in Northern Ireland.

The proposed law would allow businesses in Northern Ireland to disregard EU rules and regulations and remove the power of the European Court of Justice to rule on issues relating to the region.

Crucially, it would in parts override the protocol agreed by Mr Johnson in 2019 and mean the UK had breached its obligations under the Brexit agreement.