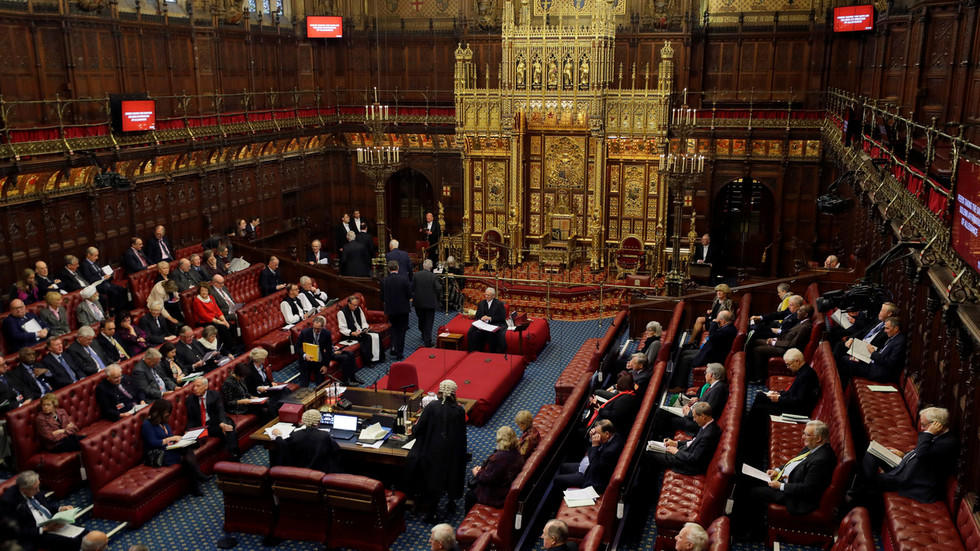 The UK Parliament has issued gag orders to a number of senior peers in the House of Lords, after an investigation found 60 honourable members had failed to participate in mandatory ‘values’ workshops.

The virtual course, titled ‘Valuing Everyone’, was instituted by Parliament as part of a conduct makeover last year and deals with anti-bullying, discrimination and sexual harassment. Members were given until April 1 to complete the training or risk being found in breach of the Lords’ code of conduct.

More than 700 peers have attended the training, but nearly a tenth of the peerage – many of whom said they were unaware they needed to comply – failed to meet the deadline. Consequently, Lucy Scott-Moncrieff, the Lords’ standards commissioner, launched 60 investigations into the matter.

Not only are the peers facing disciplinary proceedings ranging from an informal rebuke or having to make a personal apology to indefinite suspension, but they have been warned they will be held in contempt of Parliament if they speak about it publicly, according to the Times.

Heseltine, 88, told media outlets he was being harangued while recovering from a knee operation in a nursing home.

“To believe that people who actually indulge in prejudice or bullying or womanising are going to have their behaviour changed by reading a set of platitudes is naïve and, to a degree, irresponsible,” Heseltine told the paper, noting that the training avoids exacting “real penalties” for bad behaviour, such as expulsion from the House.

Boothroyd, 91, had reportedly informed Scott-Moncrieff of a recent heart operation and said she was self-isolating in the countryside, only to be told that an inquiry would be launched nevertheless, according to The Daily Mail.

Reacting to the news, writer and comedian Timandra Harkness tweeted that as a “veteran politician, [Boothroyd] should be TEACHING that course!” Boothroyd’s fellow peer, Claire Fox, chimed in to say, “Having done the course [myself], it would have been far more valuable if she had.”

The Mail also reported that a spokesman for Archer, 81, said he had not been informed of the need to attend.

Noting that the training has been “praised in separate independent external reviews”, an unnamed Lords spokesman told the Times it was important to ensure “everyone working here is able to recognise bullying, harassment and sexual misconduct, and feels confident taking action to tackle and prevent it.”

But Tom Hunt, vice-chairman of the Common Sense Group of Conservative MPs, told the paper it was “totally wrong that people are being investigated and harangued” for not attending the workshops.

Another peer, Jacqueline Foster, tweeted that she had participated in the two-hour online course of “expensive, patronising nonsense” but “lost the will about 10 mins in!” after they were “treated like children, with typical stereotypical role-play footage.”

Accusing the authorities of “hunting down our parliamentary heroes”, Conservative MP Alicia Kearns said that “taxpayers have been taken for a ride” and criticized the course for covering such subjects as whether it was “appropriate to take our staff to the pub”.

Last month, a parliamentary answer revealed that, as of March 8, some £82,158 ($114,326) of public funds had been spent on the training for members of the House of Lords. The figure includes an assumption of cost per head, as well as a 30% share of development costs, pilot sessions and administration fees.

Both Houses of Parliament received the same training.