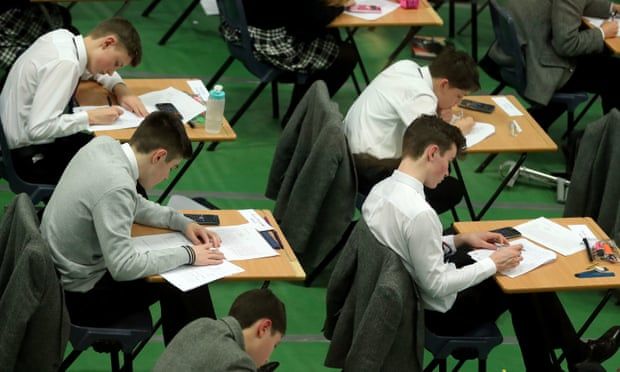 Association of School and College Leaders predicts grades will be uneven across England and Wales due to Covid disruption
GCSE results will be uneven across the country due to the varying impact of the pandemic, according to the headteachers union, which described the government’s Covid recovery programme as “lacklustre and chaotic”.

The number of top grades at A-level fell sharply this year and a similar decline is anticipated for GCSE grades as the government seeks to reverse the grade inflation caused by teacher-assessment during the pandemic.

“The fact that grades will be lower than last year is no reflection on the performance of pupils but the result of a decision by the government and exam regulator Ofqual to begin returning grades to the 2019 standard in two steps,” said Geoff Barton, general secretary of the Association of School and College Leaders.

Due out on Thursday, GCSE marks reached an all-time high in 2021 as 28.9% of pupils were awarded one of the top grades after exams were cancelled and results were instead determined by their teachers.

This year there could be 230,000 fewer top grades in the UK compared with 2021, but 230,000 more than 2019, according to Alan Smithers, director of the centre for education and employment research at the University of Buckingham.

The disruption to learning experienced across the country despite remote learning will also result in uneven results, Barton said. “Schools have not been helped by the government’s lacklustre and chaotic support for education recovery.”

Students who sat GCSE exams this year were gripped by anxiety, panic attacks and insomnia, headteachers said, adding they have never seen a year group face so much uncertainty over grades. The current educational landscape has seen recent calls to scrap GCSEs and A-levels altogether for a system that better prepares pupils for the workplace.

The bleak GCSE overview comes as the number of UK-based teenagers still searching for higher education courses remains at its highest since 2013, nearly a week after receiving A-level results.

More than 43,000 18-year-olds were marked as “free to be placed in clearing” on the Universities and Colleges Admissions Service (Ucas) website on Tuesday, according to the PA news agency.

A growing population of 18-year-olds is likely to create “a more competitive environment” for students in years ahead, Ucas chief executive Clare Marchant, previously said.

GCSE entries to creative arts subjects and design and technology, have also fallen this year, which Barton described as “worrying” and motivated by government performance measures favouring traditional subjects over others.

Facing funding pressures and rising energy costs, it will be increasingly difficult for schools to sustain small-entry subjects, added Barton, whose concern comes as the attainment gap between the more affluent London and south-east regions and the north-east is growing – now surpassing 8%.

“There is a danger that some of these subjects will largely disappear from the state education system and become the preserve only of families who are wealthy enough to afford private schools and clubs. The government must make state education a priority and fund it properly,” said Barton.

The Department for Education said it recognised the unprecedented disruption students faced during the pandemic. A spokesperson said students had been given advance information of exam content in some subjects, a grading approach that will “ensure” grades surpass those of 2019, and nearly £5bn invested to help the recovery.

“Students who collect results on Thursday will have the best range of options available to them,” the spokesperson said.

“They can be reassured that whatever their preferred destination, schools, colleges and employers are aware of the grading arrangements this year and are adapting accordingly.”
#Covid
Add Comment