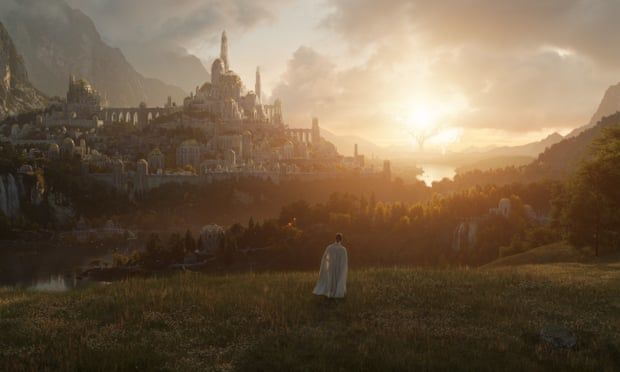 The Rings of Power series to air on Prime from September, and is set thousands of years before films based on JRR Tolkien’s stories

The first full-length trailer for Amazon’s £1bn Lord of the Rings prequel has been released, with Morfydd Clark’s debut as Galadriel getting a starring role in the promotion for the keenly awaited series that will be released in September.

The Swedish-born Welsh actor, 33, plays a much younger version of the elf, who was played by Cate Blanchett in Peter Jackson’s films of JRR Tolkien’s novels.

In the trailer, which premiered first for Prime Video subscribers, Galadriel warns Elrond, played by Robert Aramayo – best known as playing a young Eddard Stark in Game of Thrones –that: “The enemy is still out there, the question now is where.”

Clark rose to fame in 2019 in horror drama Saint Maud for which she was nominated for best actress at the British Independent Film Awards and the Bafta rising star award.

She also appeared in The Falling, Pride and Prejudice and Zombies and The Personal History of David Copperfield.

The series is set thousands of years before the events of The Hobbit and The Lord of the Rings books and will follow the events of the Second Age and the forging of the famous rings.

The trailer also offers a first look at the various realms of Middle Earth that will feature in the series including the Dwarven realm Khazad-dûm and the Elven realms of Lindon and Eregion.

The first instalment of the series was filmed in New Zealand and it was announced in August 2021 that production would move to the UK for the second season.

The Lord of the Rings: The Rings of Power will premiere on Amazon Prime Video on 2 September, with new episodes available weekly.

The series is directed by JA Bayona, Charlotte Brändström and Wayne Che Yip, who is also a co-executive producer.