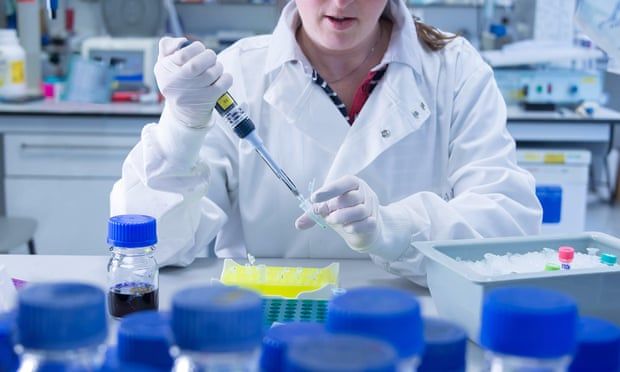 Move follows dispute over Northern Ireland protocol, as one academic says UK is going down a ‘dark path’
British scientists and academic researchers have been dealt a blow after 115 grants from a flagship EU research programme were terminated because of the continuing Brexit row over Northern Ireland.

One academic said he was “relieved” to be exiting the country and feared the UK was going down a “dark path” like Germany in the 1930s.

One hundred and fifty grants were approved for British applicants after the then Brexit minister, David Frost, successfully negotiated associate membership of the £80bn Horizon Europe programme but most will now be cancelled.

Beneficiaries in the UK were told by the European Research Council (ERC) that unless associate membership had been approved by 29 June, the grants would not be available unless the researchers moved their work to a European institution.

Ratification of the membership has been in abeyance because the UK has not implemented the Brexit trading arrangements agreed under the Northern Ireland protocol.

With the deadline passed, it has emerged that just 18 of the 150 academics will take up the grants but must move to an EU institution to get the funds.

Thiemo Fetzer, a professor of economics at the University of Warwick who was approved for €1.5m (£1.28m) of funding for research into media and geopolitics, confirmed he was one of the 18 who had reluctantly decided to move to the EU.

He said: “I am relieved as this whole Brexit process has eroded my trust in the UK’s institutions and this Horizon Europe association was just another incarnation of this.

“I take some comfort knowing that with the ERC being hosted at a great place in Europe I am also developing an exit strategy from the UK like many other academics from the EU I know. I really fear that the UK is going down a very dark path and there is a Germany in the 1930s feeling to all.”

The total of funds withdrawn has not been disclosed but is likely to run to more than £100m.

A spokesperson for the ERC said: “The preparation of 115 ERC grants offered to UK-based researchers will be terminated now that the 29 June deadline has passed.

“The grants of 18 UK-based researchers will be moved to a host institution in the EU or associated countries, following the researchers’ decisions to exercise their right to ‘portability’,” it said.

Another 14 cases have yet to be resolved, it said.

Last month, Nicholas Walton, a University of Cambridge astrophysicist studying the Milky Way and hoping to play a major part in the European Space Agency’s (Esa) next big observation project, revealed he had been forced to hand over his coordinating role on the €2.8m pan-European Marie Curie Network research project to a colleague in the Netherlands.

It said it was “disappointing” that the EU had delayed associate membership of Horizon Europe and expressed frustration with the termination of grants, saying “as per the EU’s own guidance, UK entities should in theory be able to apply and participate in projects as we work towards association”.

The government has been threatening to pull out of Horizon Europe altogether and proceed with what is known as the plan B research programme designed to rival the EU scheme.

However, there are reports of disagreements between the science minister, George Freeman, and the Treasury over the funding and structure of the alternative scheme.

UK Research and Innovation said the government had guaranteed funding for “all successful applicants to the first or second wave of Horizon Europe Grant awards”. It said its guarantee scheme was open and provides funding to researchers and innovators unable to receive their Horizon Europe funding “while the UK is in the process of associating to the programme”.
Add Comment