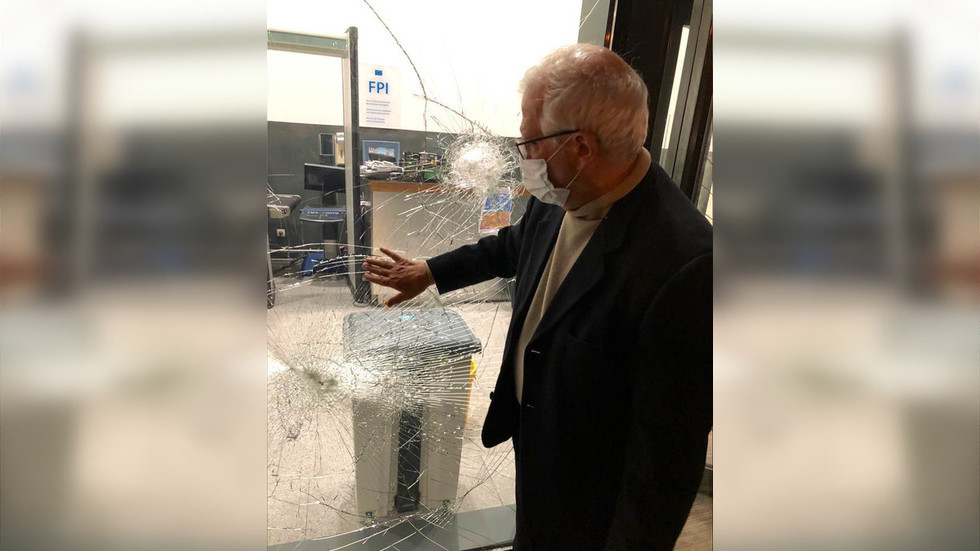 The head of the European Union’s External Action Service on Sunday said that he “strongly condemns” what he called “senseless destruction and violence” after his agency’s headquarters were attacked by an angry mob during a massive anti-lockdown rally.

Borrell also thanked the police for their actions during the incident. The top diplomat also posted a picture of himself inside what appears to be the EU diplomatic service’s office. The photo shows large impact marks left on the office’s glass walls in the wake of an apparent attack.

Videos published earlier on Sunday showed black-clad masked protesters pelting the entrance to the agency’s headquarters with various projectiles and even using some wooden planks to break inside as a group of police officers entrenched in the building sought to stop the crowd with tear gas.

The incident came against the background of clashes between the police and protesters, who’d taken to the streets of the Belgian capital to supposedly defend their freedoms and voice their discontent over the measures taken by the European nations to stop the Covid-19 pandemic.

The assault on the EU diplomatic service’s office was also condemned by the agency’s Secretary General Stefano Sannino, who denounced it as a “despicable, shameful attack.” Sannino also thanked the police for protecting the building and said that his agency would “keep proudly serving” the EU.

Anti-lockdown protests have frequently turned violent in Brussels over the past months, although it was the first time an EU institution was attacked during such a rally. According to the authorities, the Sunday protest was attended by 50,000 people, including some from other European countries.

At least 70 people were arrested following the outbreaks of violence, according to the police. Some of its officers and 12 protesters were admitted to hospitals, the media reported, adding that their injuries were not life-threatening.