A new law to protect parents in England from unnecessary school uniform costs, comes into effect from September 2022. 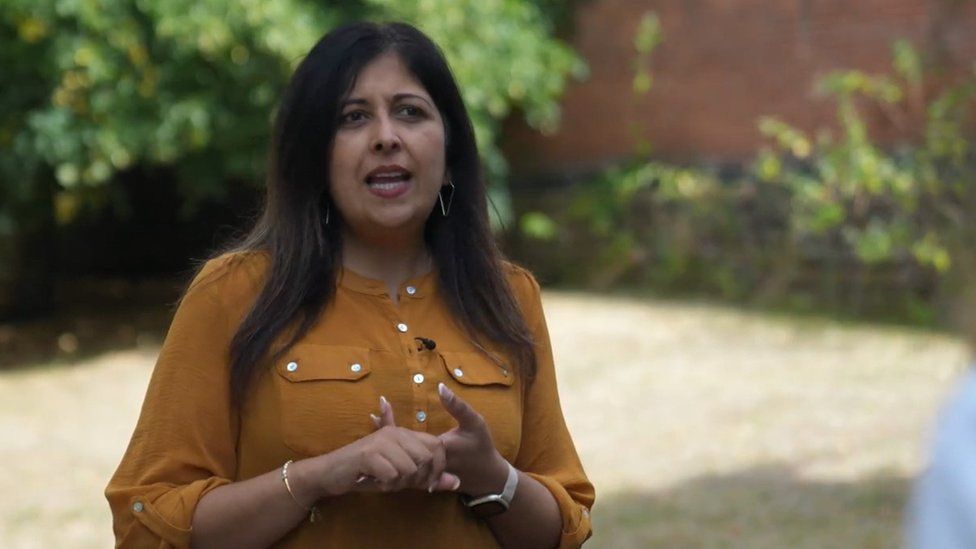 State schools will be forced to remove unnecessary branded items from their uniform requirements, allowing parents to shop around or hand clothes down more easily.

However, Shoana Qureshi-Khan is one mother who has not seen the price of school clothes come down.

She has still had to fork out for a number of items of clothing bearing the school logo for her sons aged 11 and 13.

"The school blazer alone costs between £45 to £60," she says. "It's just a phenomenal amount that you just don't prepare for."

The boys are in the same secondary school and can pass on some items, but Shoana still reckons she has spent more than £300 kitting them out this summer.

"It is just crazy if I'm honest. I suppose I can understand one logo so the kids feel part of the school family, but it's just so unnecessary," she said.

"I can get something else from the supermarket for a few pounds. It's just not fair on hard-working families and pushes the equality gap further."

Shoana's story will ring true for hundreds of other parents.

An issue for some is that September's new rules come with a loophole.

It means schools which need to secure a new uniform contract with a supplier have until December 2022 to put that in place. They then have until the start of the September 2023 school year to introduce those garments.

The new legislation requires branding to be kept to a minimum, but doesn't ban it, so some children will continue to wear some items with school logos, for example blazers.

For those parents who struggle to afford school uniforms some help is available, from people like Emma Prosser who runs the Uniform Project Nottingham.

She started off facilitating uniform swaps between the parents of children attending two primary schools.

But demand has grown so much that she now has a uniform bank available to the parents of pupils at 19 schools across Nottinghamshire, where those who need it can access free uniforms.

We met her surrounded by piles of jumpers, pinafores and donated warm coats.

"You have three types of parents," she said. "Those who like to buy new, and like brands. Those who really can't afford it and really need the help. And also a growing number of those with a decent income but just don't see any sense in buying new. Buying second-hand is so much greener."

Now, Emma partners with local food banks to offer items of uniform alongside food staples and she tells us she's never been busier. But the logos place a limit on how easily good clothes can be shared.

"You have got to cater to your parental community," Emma said. "You're not doing that if you're insisting on having logos and expecting everyone to have a spare £300 for each child they have." 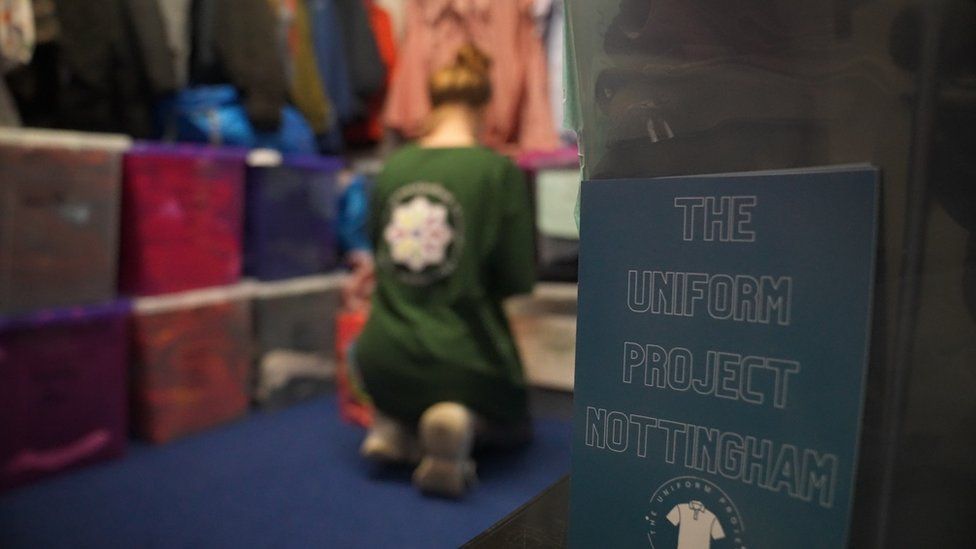 While we were at the Uniform Project, a mum of four came in. She was emotional and did not want to give her name, but was relieved to receive free jumpers, cardigans, trousers, shirts and skirts for her family. "I've been panicking," she admitted.

"To kit out my son in secondary, it'll cost me £98 because he has to have logo-ed everything except shirts," she tells us. "When you're spending as much on one uniform as you do on a big shop, it's difficult. It's really hit us hard this year."

The Children's Society said it expected the average cost of a school uniform this year to be £315 per primary pupil and £337 per secondary pupil, unchanged from 2020.

But the charity, which helped push through the new legislation, believes it should empower parents to push back when uniforms feel too much.

"Failing that, if they are still not satisfied, they should contact their local MP or the Department for Education itself. The department will then contact the school and require them to implement the law."

A Department for Education spokesperson said: "School uniform must never be a burden for parents or a barrier to pupils accessing education."

The new law coming into effect next month should help families to keep down costs, they added. "We know schools and families are facing increased cost pressures more broadly, which is why this government is providing over £37bn to help households with the greatest need and supporting families through the Household Support Fund."

Unlike many other products at the moment, school uniforms have not gone up much in price this year. The difference is that for an increasing number of families, the ability to make a big one-off payment at the start of the academic year has become much harder to achieve.

The new guidelines are supposed to help with that but there are a lot of grey areas, with parents and schools likely to have differing opinions of what might be considered "necessary" or "reasonable".

Parents who don't think their school is complying with the new guidance are being told to approach the school's governors in the first instance.

That's not an easy step to take, but the hope when this legislation received cross-party support was that a gentle reminder from parents that schools must comply with the new guidelines will be enough to bring most uniform policies down in price.

Emma Prosser, founder of the Uniform Project Nottingham, says that this summer has seen a “massive increase in users”