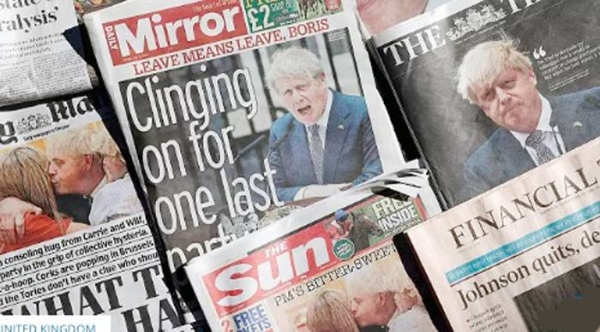 Several new contenders in the British Conservative Party's latest leadership race have thrown their hats into the ring this weekend, opening up the field to replace the departing Boris Johnson.
The wide variety of candidates heralds a potentially bitter contest over the summer to take over as party leader and therefore also as the UK's new prime minister.

Last week Johnson agreed to resign — once a new leader is chosen — after a series of domestic scandals implicating his leadership and integrity.

The number of candidates stood at nine on Sunday morning after the former health minister Sajid Javid, the new Chancellor of the Exchequer (finance minister) Nadhim Zahawi, and the ex-foreign and health minister Jeremy Hunt all entered the race.

Trade minister Penny Mordaunt then became the latest to declare her candidacy, launching a campaign video saying "our leadership has to change".

They were preceded by the current transport minister Grant Shapps, who is advocating his stance against the main rail union amid an ongoing industrial dispute.

Former finance minister Rishi Sunak — whose resignation on Tuesday night along with Javid triggered a flurry of others — is among the favorites for the job.

Sunak announced his leadership bid on Friday with a campaign video in which he promised to confront the difficult economic backdrop with "honesty, seriousness and determination", rather than piling the burden on future generations.

"Someone has to grip this moment and make the right decisions," he said.

Former UK Equalities Minister Kemi Badenoch added her name to the list of contenders on Saturday. She was one of nearly 60 members of parliament and aides who resigned this week to force Johnson from office.

In an article in The Times newspaper, Badenoch called for change and said British opinion was "exhausted by platitudes and empty rhetoric".

Conservative MP Tom Tugendhat and Attorney General Suella Braverman have also officially announced their candidacies. But Defense Secretary Ben Wallace, who had been considered a potentially strong contender, has pulled out of the race.

The announcement of Sunak's candidacy won the immediate support of several MPs. He is also the preferred candidate among Conservative Party members, a quarter of whom favor him, according to a poll last week.

The ex-finance minister is followed by Foreign Secretary Liz Truss, who is backed by 21% of party members, according to the Opinium poll for Channel 4 News. Truss however has yet put her name forward.

Sunak was made finance minister in February 2020, replacing Sajid Javid who quit just two months after the Tories' landslide election win in December 2019. He was praised for a COVID-19 economic rescue package, including a costly jobs retention program that averted mass unemployment.

But he later faced criticism for not giving enough cost-of-living support to households. Revelations this year about his wealthy wife's non-domiciled tax status and a fine he received for breaking COVID lockdown rules have damaged his standing.

His tax-and-spend budget last year put Britain on course for its biggest tax burden since the 1950s, undermining his claims to favor lower taxes.

Sunak voted for Brexit in the 2016 EU referendum. A report by the Centre for European Reform in June suggested that his latest tax rises "would not have been needed if the UK had stayed in the EU (or in the single market and customs union)", arguing the post-COVID recovery would have been less sluggish.
#Boris Johnson  #COVID-19  #Johnson  #Covid
Add Comment