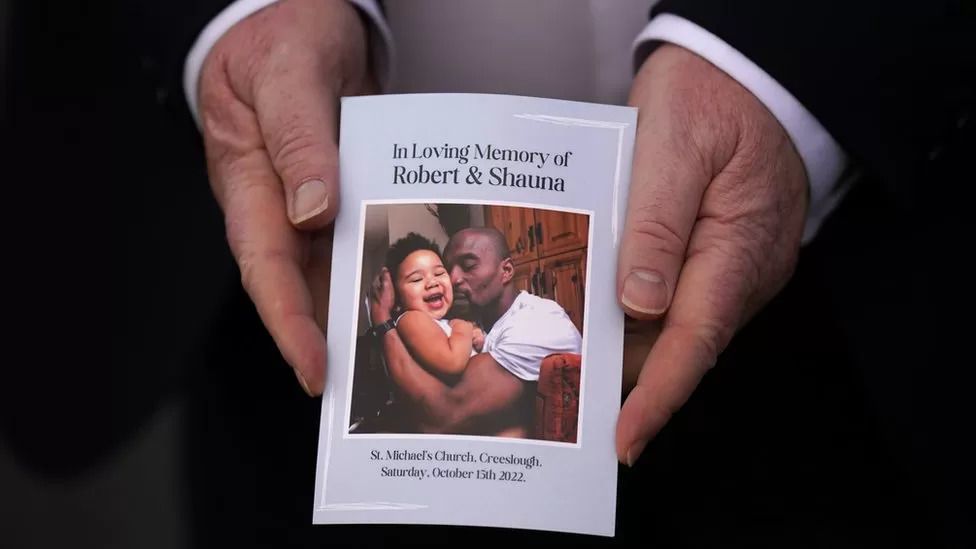 Creeslough explosion: Creeslough father and child had 'a beautiful love'

A father and daughter who died in the Creeslough explosion in County Donegal shared a "beautiful love", their funeral Mass has been told.

Robert Garwe and Shauna Flanagan Garwe, the youngest of the 10 victims, were found in each other's arms in the rubble of the service station, their family said.

A priest said Shauna, 5, "made a lasting impression on all she met".

Mr Garwe, 50, was proud of his children and his homeland, Zimbabwe, he added.

The Irish President Michael D Higgins joined mourners for Saturday's service at St Michael's Church in the village, where several of the funerals have taken place.

Irish police said the explosion on 7 October appeared to have been a tragic accident.

As their coffins lay beside each other at the front of the church, Fr John Joe Duffy said the father and daughter had also been "side-by-side in the shop" when the explosion happened. 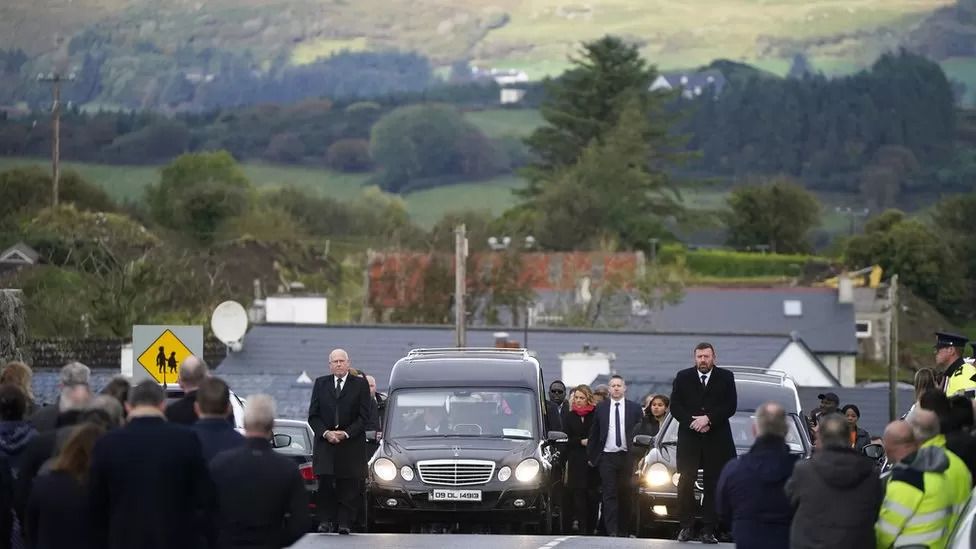 "Her father I'm sure in that split second just wanting to help and protect his beautiful daughter so very much," he said.

"We pray that they are side-by-side in heaven."

The priest said he had known Mr Garwe and his family.

Shauna was "a beautiful little girl", he said, who loved art and animals.

She had just started as a pupil at nearby Scoil Mhuire weeks before her death and was a "radiant beacon of light, of happiness and joy" to all who knew her.

Robert, known in the village as Bob, had taken his daughter to the shop to buy a birthday cake and treats when the explosion happened.

Throughout the week, eight other funerals have been held, either in the small village itself or the surrounding areas.

After attending the Mass on Saturday morning, Irish president Michael D Higgins said it had been an "extraordinary week in so many ways".

"In a small community where the relationships are so close and where people have intimate knowledge of families and circumstances, it isn't a single person or a family that carries the big lash of a terrible tragedy like this, but it is the whole community," he said. 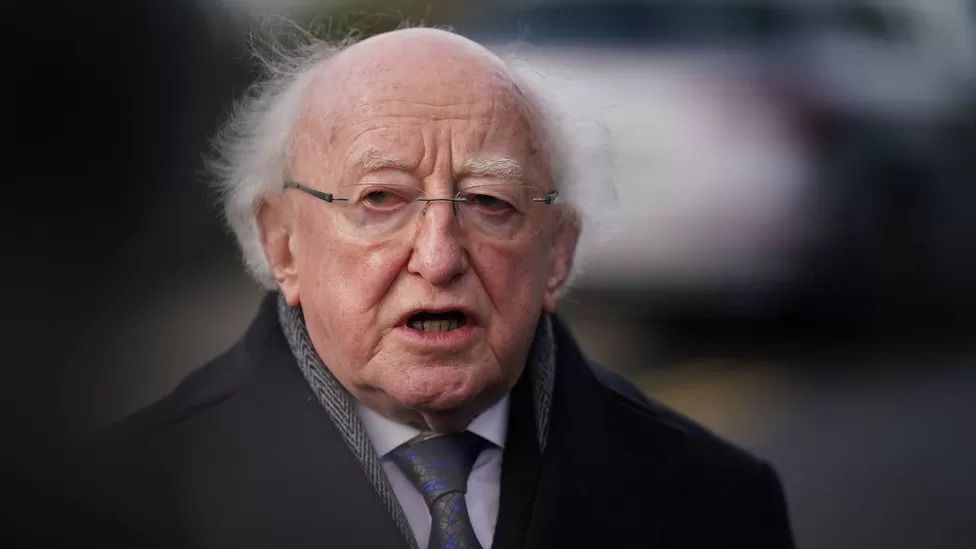 President Higgins said times like these have shown how the "best instincts and the decencies of people come to the fore".

"I think what will happen now is that will be the big challenge," he continued.

"The funerals are over, but all the vacant spaces are there and all the losses that were experienced and people remember and something new will have to come in its place - new relationships, new connections, new functions that will happen in the community.

"But I'm certain that they have all of the ingredients, of the courage, of the determination, to make that something new fresh and be as valuable as what they have lost." 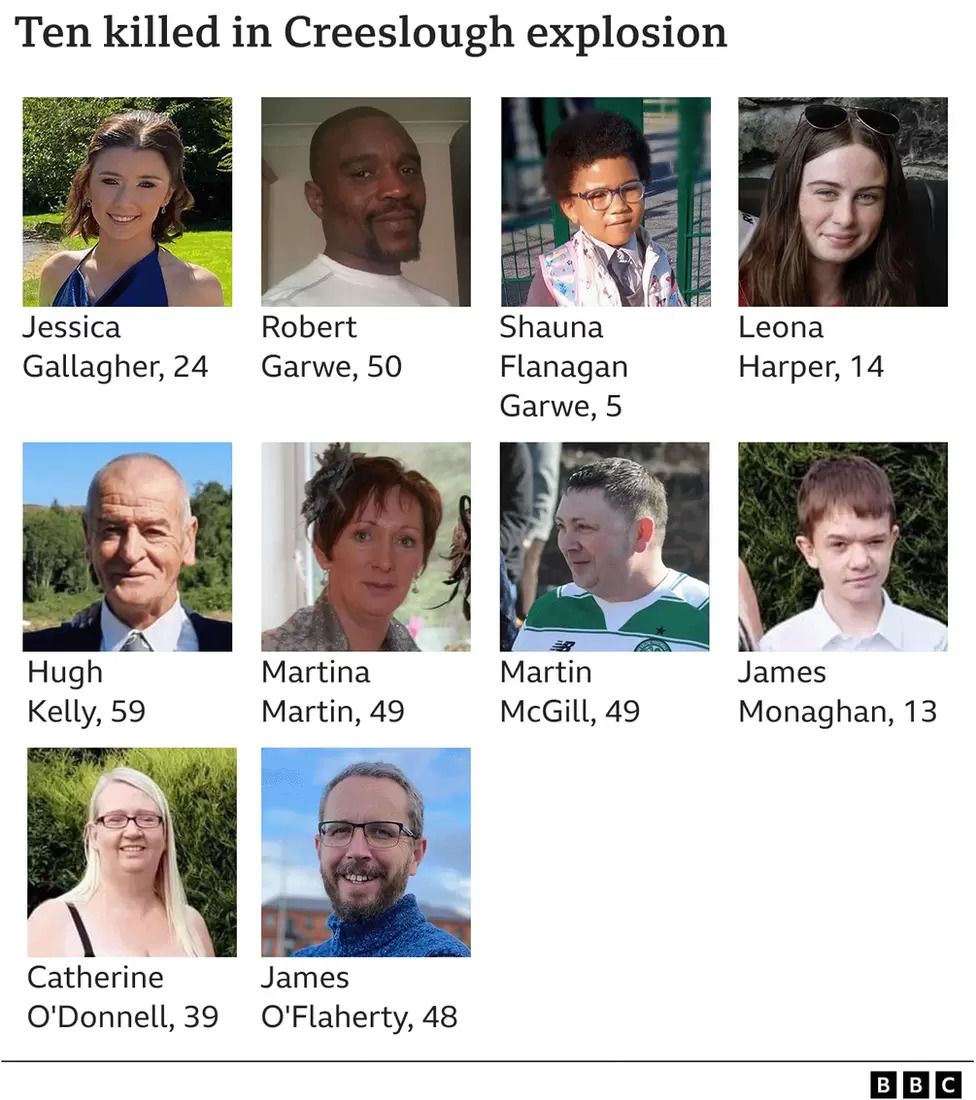 On Friday, the funeral of Hugh Kelly, 59, took place.

On Thursday, the funerals of Leona Harper and Martina Martin were held.

On Tuesday, funeral services were held at St Michael's Church in the village for Jessica Gallagher, 24, and 49-year-old Martin McGill.

Gardaí are continuing to investigate the cause of the blast in a building complex that included a service station, convenience store and apartments.

The store, which had a post office, was the main shop serving the 400-strong village.