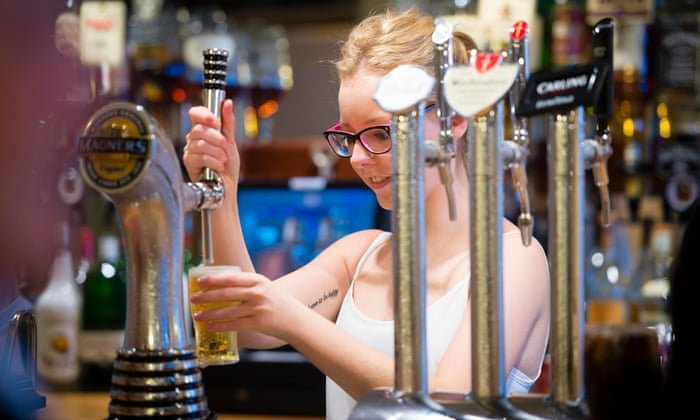 Low earners seven times more likely to work in sectors worst hit by shutdown, study finds
The low-paid, young people and women are likely to be the hardest hit by the coronavirus shutdown of businesses including restaurants, hotels, pubs, retailers and transport services.

Low earners are seven times as likely as high earners to work in a business sector that has shut down, according to the Institute for Fiscal Studies. The body’s analysis found a third of the bottom 10% of earners worked in the worst-hit sectors, against one in 20 (5%) of those in the top 10%.

Tim Roache, the general secretary of the GMB union, said: “This outbreak has shone a light on those left with more month than money. It’s confirmed the damage done by the proliferation of zero-hours agency work and bogus self-employment during the past decade. There can be no return to business as usual after this crisis.”

Workers aged under 25 are about two and a half times as likely to work in a sector forced to suspend trade. Companies closed under the government’s social distancing measures employed nearly a third (30%) of all employees under 25, not including full-time students who also have a job. This compares with just one in eight (13%) of workers aged 25 and over.

Women were about one-third more likely than men to work in a sector that has been shut down, as they make up the bulk of retail and hospitality workers. One in six female employees worked for businesses hit by the lockdown, compared with one in seven of their male counterparts..

Xiaowei Xu, a senior IFS research economist and an author of the briefing note, said: “There is a remarkable concentration of younger and lower-paid workers in the sectors most affected by the current lockdown. Women are also more likely to be affected than men.


Sign up to the daily Business Today email or follow Guardian Business on Twitter at @BusinessDesk
“Fortunately, in the short run, many will have the cushion of the incomes of parents or other household members. But for the longer term there must be serious worries about the effect of this crisis on the young especially and on inequality more generally.”

The study found that 61% of under-25s who worked in shutdown sectors lived with their parents and tended to contribute a relatively low proportion of household income on average, at 16%.

The figures delineate the pain for millions of workers whose jobs are at risk after weeks of enforced closures intended to slow the spread of the virus. While many will continue to be paid, with a 20% pay cut, under the government’s furlough scheme, it is already clear that thousands will be made redundant.

Last week it emerged that nearly a million people had successfully applied for universal credit in the first fortnight of the lockdown.
#Coronavirus
Add Comment