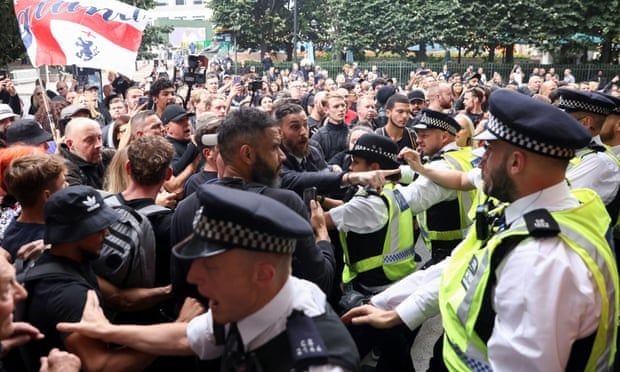 At least four officers were injured and arrests were made during a confrontation as hundreds of people gathered outside the offices of the Medicines and Healthcare products Regulatory Agency (MHRA) in Canary Wharf.

Police drew batons and called for reinforcements as protesters attempted to force open the door of the regulator’s offices, with security guards looking on from inside.

Some of the crowd who had gathered at Canary Wharf were later involved in another confrontation outside the Science Museum vaccination centre in Kensington, west London.

“A number of protesters have become violent towards police,” the Metropolitan police said on Twitter after the confrontation in east London.

“Four of our officers have been injured during clashes. This is unacceptable. We remain on scene.”

The protests are understood to have been organised by activists angered by reports that the Covid-19 vaccination campaign could be extended to younger age groups.

This week, a group calling itself Official Voice told participants on social media to leave behind any placards, come dressed in black and meet at Canary Wharf underground station.

Material promoting the protest on a Telegram channel set up by Official Voice activists described those taking part as people coming to ask for answers from the MHRA.

“We will remain respectful but we expect answers/responses to our questions today. We will not be leaving until then,” they added.

Andrew Wood, a councillor for Canary Wharf, said leaflets were being handed out about the vaccination of children.

He added: “The police have been here all week because we were expecting Extinction Rebellion, so most of the police and security’s been outside the banks.

“So whether the anti-vaxxers realised this or not the police were ready for a protest, it’s just that it was anti-vaxxers not Extinction Rebellion who turned up this afternoon.”

The MHRA last month approved the Moderna Covid vaccine for children aged 12 to 17, weeks after the Pfizer jab was given the green light for the same group.

The announcement by the body came after it was announced that 16- and 17-year-olds in England were to be offered a first dose of a Covid-19 vaccine before school reopenings.

The MHRA said it was up to the Joint Committee on Vaccination and Immunisation (JCVI) to advise the government on whether children in the 12-17 age group should be given the Moderna jab.

The JCVI decided not to recommend vaccines for healthy 12- to 15-year-olds, but did support offering vaccines to thousands of children with underlying health problems.
#COVID-19  #vaccine  #Pfizer  #Covid  #Vaccines
Add Comment