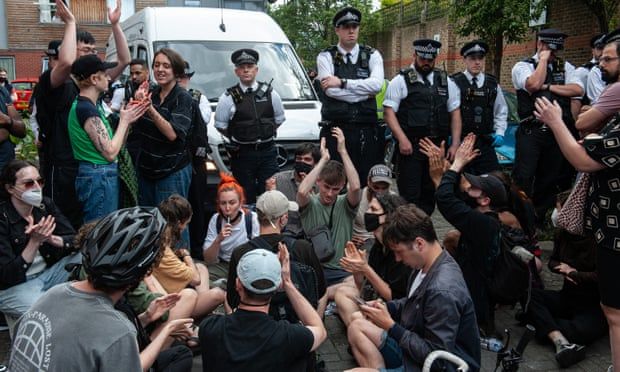 A man arrested for immigration offences was released on bail after protesters gathered in south-east London on Saturday for hours to block a van he was being transported in from leaving.

Video footage posted on Twitter showed a crowd of about 200 people sitting on the ground in front of the vehicle in Peckham while another clip showed members of the public standing and shouting “let him go”.

Metropolitan police officers were called to Evan Cook Close, near Queens Road train station, shortly after 1.30pm “to a report of protesters obstructing immigration officers” and said officers remained at the scene shortly before 5pm.

It is understood the man is Nigerian and was suspected of overstaying his visa. He was released on immigration bail.

A spokesperson for the force said: “Officers attended and found a van was being prevented from leaving the location.

“One man has been arrested for immigration offences.”

The Met later said the man was arrested by immigration enforcement officers and has since been released on bail.

Footage circulated on social media and was given to journalists of police at the protest, where officers are seen to be pushing members of the crowd.

The Met did not comment when asked on allegations by demonstrators of heavy-handed tactics by some officers to remove some of the protesters who were sitting down in front of the van.

Eleanor Janega, 39, from south-east London, told the PA news agency: “We were alerted that there was an immigration raid in process so locals came down to block it.

“We had been sitting here blocking the van and having ice lollies.

“They brought more police in and tried to break through the crowd by pushing us. We all sat down.”

Reginald Popoola, a local Labour councillor, said people had “encircled the van peacefully” but that some were pushed during the demonstration. 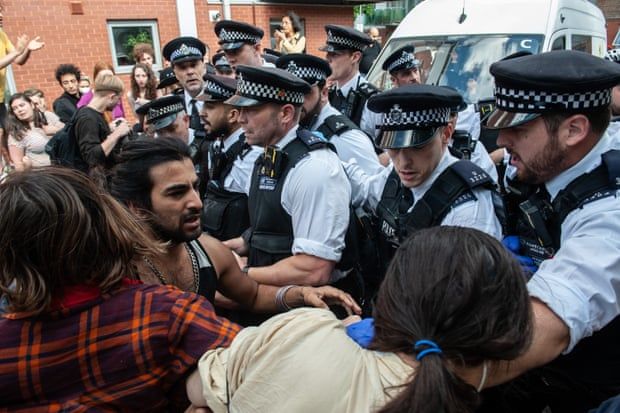 Police hold back activists trying to block an immigration van from transporting a prisoner.

Claudia Webbe, the independent MP for Leicester East, commended the protesters’ “humanity and solidarity” on Twitter: “This is people power – so beautiful to see.”

The organisation Lewisham Anti-Raids tweeted: “After 4 hours of resistance and a crowd of 200 people they’re letting our neighbour go! People power wins. We’re shouting ‘don’t come back to Peckham!’”

A spokesperson for the Home Office said: “Preventing immigration enforcement teams from doing their job is unacceptable.

“Blocking or obstructing them will not deter them from undertaking the duties that the public rightly expect them to carry out.”