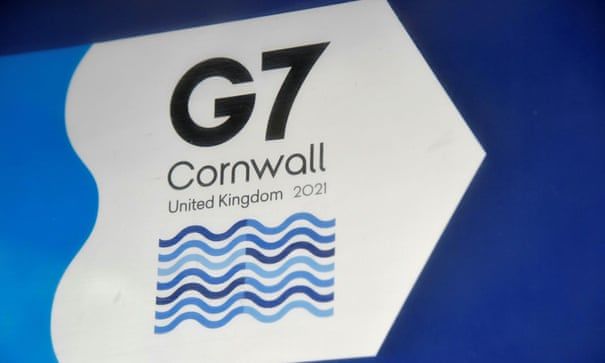 Civil society groups say UK agreements should tackle long-term unemployment and gender and racial equality
The UK government should broaden its ambition for the G7 next week to include agreements that tackle long term unemployment, eradicate insecure jobs and close the gaps in gender and racial equality, according to civil society groups given official status at the summit in Cornwall.

In a letter to Boris Johnson, groups representing unions, women, ethnic minorities, developing world nations and young people said he should focus on avoiding repeating the mistakes that followed the 2008 financial crash.

Then, they said, governments allowed austerity to be the dominant theme and failed to take action that could improve living standards and address the climate emergency.

The prime minister is hosting the G7 this year, and as part of the summit has nominated groups to represent the concerns of civil society. The international development group Bond was appointed to coordinate dialogue between the UK government and these organisations from around the world.

Johnson has said he wants “to unite leading democracies to help the world fight and then build back better from coronavirus and create a greener, more prosperous future”, but until now has focused his efforts on sealing a global digital tax deal.

The civil society groups said the UK should grasp the opportunity offered by the Biden administration in the US, which wants to prevent a generation of young people continuing in insecure jobs that increase gender and racial inequality.

Joe Biden has told G7 leaders he wants to strike ambitious agreements covering jobs and growth and the climate emergency when he joins other world leaders in Carbis Bay and St Ives in Cornwall at the three-day summit starting on 11 June.

On Monday, the Organisation for Economic Cooperation & Development said the UK was on course to suffer the worst economic scarring of any G7 nation.

The TUC leader, Frances O’Grady, was among the signatories along with Jessica Woodroffe, the director of the Gender and Development Network, Simon Starling, the director of policy, advocacy and research at the development charity Bond UK, and Sophie Daud, the chief executive of the Future Leaders Network.

“We must match the most ambitious proposals in the G7 and set out concrete and coordinated plans to deliver better jobs in a move away from insecure and non-standard work, including in the platform economy.

“And we must show how these plans will tackle gender and racial inequalities and provide support to the young people hit hardest by the crisis, in the G7 and internationally.”
#Joe Biden  #Coronavirus  #Boris Johnson
Add Comment