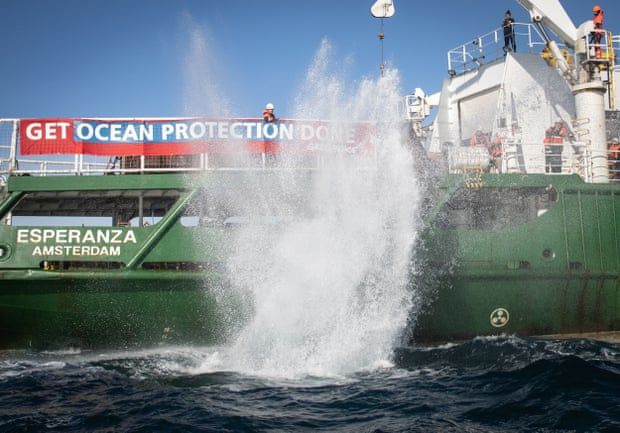 The government agency charged with protecting the marine environment has dropped its case against Greenpeace over a protest intended to obstruct destructive fishing practices in UK coastal conservation areas.

The judge in the case rebuked the Marine Management Organisation over the case, saying that the licensing regime, under which the case was brought, “could be better used as a source of protection against those who actively seek to harm the marine environment”.

Greenpeace has called for the government to ban the practice of bottom trawling, and other heavy industrialised fishing, in response to the ruling.

Marine protected areas (MPAs) are designated by the government to protect marine life in UK waters by curbing fishing and allowing species to recover. Ministers have pledged to protect 30% of the UK’s sea areas, as part of a wider commitment to conservation.

But some fishing is still allowed, including the practice of bottom trawling, which tears up the seabed and which experts have said is extremely destructive to many species. Bottom trawling is also a significant source of releasing carbon, as the seabed normally acts as a valuable carbon sink to absorb greenhouse gases from the atmosphere, but turns into a carbon source when disturbed.

In 2020, Greenpeace protesters dropped large boulders on to the sea bed in the Dogger Bank marine protected area, a key fishing area for bottom trawlers, and the following year dropped more in the Offshore Brighton MPA. The large granite rocks were harmless to marine life and surface fishing, but they get entangled in the weighted nets of bottom trawlers, obstructing the practice.

The MMO took out a prosecution against Greenpeace, arguing that the licensing regime prohibits protesters from taking such action. However, the judge in the case, Edward Bindloss, criticised the body.

He added: “One of the ironies of this litigation is that both the MMO and Greenpeace are committed to improving the marine environment.”

“The parties in this case should be allies, not antagonists. They should be acting in harmony given their stated purpose and objectives are the same. Greenpeace should be a supporter of the licensing regime and the MMO should support the prevention of any harmful deep sea fishing methods over important marine seabeds. It touches on the absurd that this litigation is happening at all.”

On Monday morning, the MMO decided to offer no evidence against Greenpeace, resulting in verdicts of not guilty being recorded.

John Sauven, the outgoing executive director of Greenpeace, who was charged under the prosecution, said: “The MMO’s role is to protect our marine ecosystems, a vitally important job in a climate and nature emergency. Our action was designed to safely protect nature from destructive fishing in an area designated as protected but where the MMO is miserably failing to do its job. For them to waste court time and public money prosecuting us for doing exactly that is, as the judge said, absurd.”

He added: “This is a clear signal for the environment minister to take the urgent action needed to actively protect our oceans from industrial fishing and stop licensing destructive ships and fishing methods in all of the UK’s MPAs.”

The MMO said in its submission: “Very exceptionally, the MMO has, in all the circumstances and taking particular note of the depth and the extent of the learned judge’s comments on the matter, decided that the appropriate course of action is to propose to offer no evidence to all charges on the indictments against both defendants.”

Last year, the conservation group Oceana argued that licences for bottom trawling in UK waters could be unlawful.

The government has taken the first steps towards curbing bottom trawling in conservation areas, but Greenpeace said more was needed.

“The findings of law in this case made clear that the MMO had jurisdiction to prosecute, and that Greenpeace are expected to comply with the marine licensing regime. It is noted that since initiating proceedings, Greenpeace have not carried out any further unlicensed activity.

“The MMO has decided not to continue with the prosecution. In doing so, we fully expect that Greenpeace will, in accordance with the comments made by the learned judge, support and comply with the marine licensing rules in future.

“Should unlicensed activity occur in the future we will continue to investigate and will consider enforcement actions in line with our published compliance and enforcement strategy.”

The MMO did not respond to a Guardian query asking how much the prosecution had cost, but the cost to taxpayers is likely to be at least in the tens of thousands of pounds.