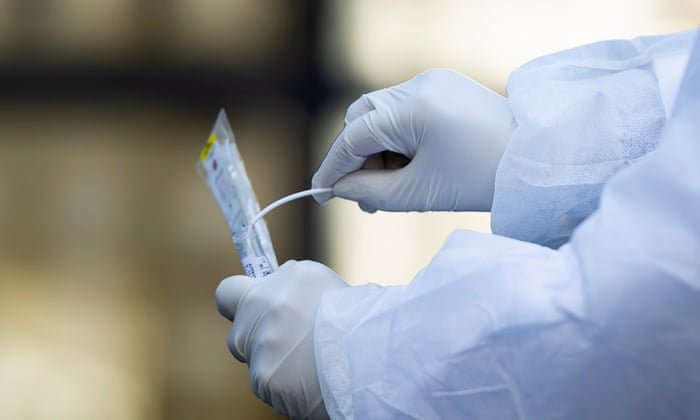 UK coronavirus home testing to be made available to millions

Test to be validated this week, then made available to healthcare workers and general public
Millions of 15-minute home coronavirus tests are set to be available on the high street or for Amazon delivery to people self-isolating, according to Public Health England (PHE), in a move that could restore many people’s lives to a semblance of pre-lockdown normality.

Prof Sharon Peacock, the director of the national infection service at PHE, told MPs on the science and technology committee that mass testing in the UK would be possible within days, saying evaluation of the fingerprick tests should be completed this week. The government later took a more cautious line, saying that the tests would not be available so quickly.

The UK government has bought 3.5m tests – which reveal whether someone has had the virus and is therefore thought to have some immunity – and is ordering millions more, it has said.

At the prime minister’s daily press conference on Wednesday, the government’s medical and scientific advisers said they needed to be certain the tests worked before they could be made available.

“The key thing for us to do is evaluate – are these tests accurate enough to be used by the general public?” said Chris Whitty, chief medical officer. “If they are incredibly accurate, we will work out the quickest way to release them. If they are not accurate, we will not release any of them.”

The tests would, he said, “completely transform what we can do” – but were not as important as the antigen tests which are used to diagnose Covid-19 in sick hospital patients.

Boris Johnson said they would make the antibody tests available when they could. “We will do it as soon as possible,” he said. “We are massively ramping up our testing programme.”

The home test, which looks like a pregnancy test, involves pricking a finger to produce a drop of blood, which is then analysed by the device.

“Several million tests have been purchased for use. These are brand new products. We have to be clear they work as they are claimed to do,” Peacock said. “Once they have been tested this week and the bulk of tests arrive, they will be distributed into the community.”

Amazon has agreed to carry out distribution and the tests are also set to go on sale in chemist shops.

Asked if they would be available in days rather than weeks or months, Peacock said: “Yes, absolutely.” If there was a charge for them, she thought it would be minimal, she added.

Widespread availability of a fingerprick test that produces results in 10 to 15 minutes would be a game-changer. NHS doctors and nurses with symptoms would know immediately whether they have had Covid-19, enabling them to get back to work sooner.

NHS workers or anyone else would be able to know if they have had the virus and are therefore immune, which means they could resume their normal lives, no longer having to work from home or keep their distance from other people. It is widely thought that having had Covid-19 makes people immune to the disease. There have been cases of apparent reinfection, though they are rare.

The test detects the presence of IGM, an antibody that arises very early on in the infection, and IGG, which is increased in the body’s response to the virus. The results of some of the tests on order can be read by anyone, but others would need to be interpreted by healthcare professionals.

The UK is not the only country ordering the antibody tests. “Tests are being ordered across Europe and elsewhere and purchased in south-east Asia. This is widespread practice. We are not alone in doing this,” said Peacock.

Amazon had agreed to deliver the home tests, Peacock told the committee. There was no suggestion from her that the Royal Mail might be given the contract.

The antibody home tests are part of a programme of increased testing, she said. The number of nasal swab tests, which are currently being used in hospitals to find out whether very sick patients have Covid-19, will be increased within the next couple of days.

The government has promised that these tests, for current viral infection, will reach 25,000. Last week, the numbers tested topped 8,000 but since then have fallen to a low of 5,522, recovering yesterday to 6,491.

Peacock reiterated that they would get to 25,000 a day. It is understood that a deal has been struck with the pharmaceutical giant Roche to increase the numbers to that level.

Peacock said there were also plans to be able to test up to 100,000 key workers a day. “There is urgent work going on,” she said. A test processing centre that has just been opened in Milton Keynes would allow a much bigger laboratory of these standard PCR (polymerase chain reaction) tests.

The home-based test kits would be the third plank of the testing programme. The fourth was seroprevalence testing – blood tests to establish how widespread the virus was in the country.

A Boots spokesperson said: “We are keen to work with the government to explore opportunities to support Covid-19 testing and to support the NHS in any way we can. However we do not have any type of Covid-19 tests in our stores. Customers should not make a trip to a Boots store or pharmacy for this purpose.”

• This article and its headline were amended several hours after publication after the government’s chief medical officer, Chris Whitty, contradicted earlier evidence to a select committee from Prof Sharon Peacock, the director of the national infection service at Public Health England, about when the tests would be introduced.
Add Comment