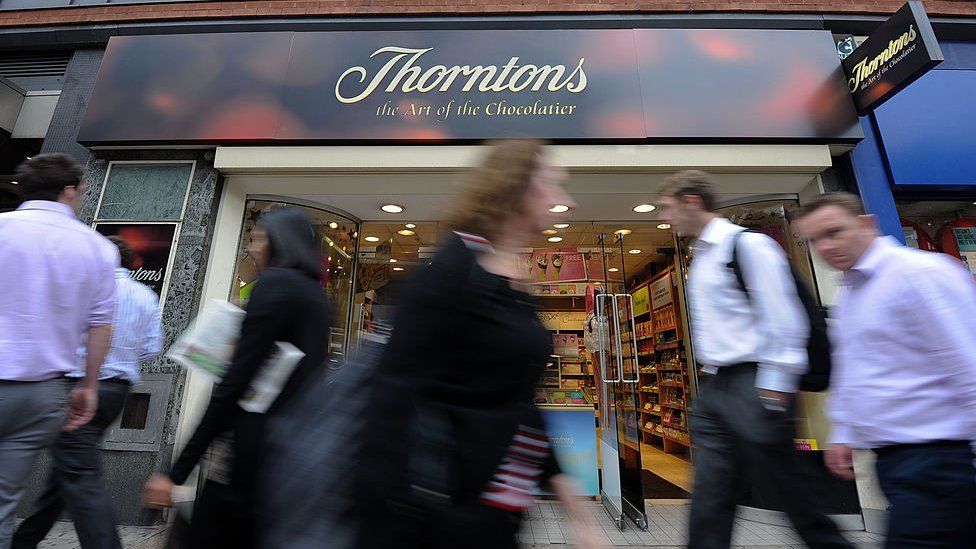 Chocolate maker Thorntons has said none of its stores will reopen after coronavirus lockdowns are lifted.

The decision to close its 61 shops will put more than 600 jobs at risk.

The company said it had been badly hit by the pandemic, which forced its stores to shut their doors during the crucial Christmas and Easter holidays.

"The obstacles we have faced and will continue to face on the High Street are too severe," said Thorntons retail director Adam Goddard.

"Despite our best efforts we have taken the difficult decision to permanently close our retail store estate."

Thorntons has been on the High Street for more than a century but these days history isn't enough to guarantee survival.

It was losing its way in the early 2000s with newer players, like Hotel Chocolat, entering the scene. It also embarked on a strategy of selling more chocolates through supermarkets and closing unprofitable shops.

Italian food giant Ferrero bought the business in 2015 and has been trying to turn it around ever since. Over the last five years, it's shrunk from 252 to 61 stores.

But Ferrero has now thrown in the towel on Thorntons stores altogether, betting that the brand's future is now online and on the supermarket shelves.

This pandemic has created brutal trading conditions for so many traditional retailers. And the high street shakeout is still far from over.

Thorntons said it had spent £45m transforming the business with changes to the way stores operate and the introduction of new cafes but its plans had been thrown off course by the pandemic.

The company, which was founded in Sheffield in 1911, said it would continue to sell its chocolate online and try to sell more through supermarkets.

Since the beginning of the crisis, sales through its website have increased by more than 70% compared to the previous year, it said.

It will also try to expand the range of products made at its factory in Alfreton, Derbyshire and increase international sales.

In 2011, Thorntons announced plans to massively reduce the number of stores it had on the High Street and in shopping centres.

It said it would close up to 180 of the 364 stores it had at the time, following a strategic review.

Since then, the number of stores has dwindled to 61.

In a statement, the company said: "We remain committed to this iconic British brand and will continue to invest further in the future potential of Thorntons to ensure we evolve with the times."

Thorntons is just the latest well-known name to suffer the impact that rolling lockdowns have had on the High Street as more people take to shopping online.

More than 17,500 chain stores and other venues closed in Great Britain last year, according to figures from the Local Data Company. That is an average rate of 48 closures a day.