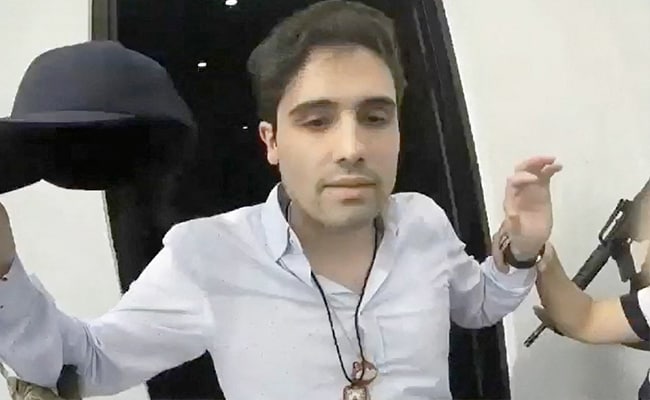 Ovidio Guzman: The United States had offered a reward of up to $5million for information leading to Ovidio Guzman's capture, accusing him of being a key player in the infamous Sinaloa cartel.
Mexican security forces on Thursday captured a son of jailed drug kingpin Joaquin "El Chapo" Guzman, scoring a high-profile win in the fight against powerful cartels days before US President Joe Biden visits.

He said the arrest was the result of six months of intelligence work tracking down the 32-year-old, who has allegedly helped to run his father's operations since "El Chapo" was extradited to the United States in 2017.

The United States had offered a reward of up to $5 million for information leading to Ovidio Guzman's capture, accusing him of being a key player in the infamous Sinaloa cartel.

Gunfire and arson shook Culiacan after the arrest, which comes as Mexican President Andres Manuel Lopez Obrador prepares to welcome Biden next week for a North America leaders' summit at which security is expected to be high on the agenda.

As Guzman's henchmen reacted with fury, a passenger jet was hit by a bullet in its fuselage as it was preparing to take off from Culiacan airport, but there were no injuries, the airline Aeromexico said.

"El Chapo" is serving a life prison sentence in the United States for trafficking hundreds of tons of drugs into the US over the course of 25 years.

However, his cartel remains one of the most powerful in Mexico, accused by Washington of exploiting an opioid epidemic by flooding communities with fentanyl, a synthetic drug about 50 times more potent than heroin.

Ovidio Guzman and one of his brothers are accused of overseeing nearly a dozen methamphetamine labs in Sinaloa as well as conspiring to distribute cocaine and marijuana, according to the US State Department.

He also allegedly ordered the murders of informants, a drug trafficker and a Mexican singer who refused to perform at his wedding, it said.

Ovidio Guzman was captured briefly once before in 2019, but security forces freed him after his cartel waged an all-out war in response.

Several people were killed on that occasion in Culiacan as gunmen launched a massive machine-gun assault, leaving the streets strewn with blazing vehicles.

His release prompted sharp criticism of Lopez Obrador, who said the decision was made to protect civilians' lives in the city of around 800,000 people.

The Sinaloa state government urged people to stay at home on Thursday following the latest arrest.

Lopez Obrador has struggled to curb the brutal violence plaguing Mexico since taking office in 2018.

He championed a "hugs not bullets" strategy to tackle violent crime at its roots by fighting poverty and inequality with social programs, rather than with the army.

The left-wing populist has asked the United States to invest in regional economic development instead of sending helicopter gunships and other weapons to take on drug traffickers.

Mexico has registered more than 340,000 murders since the government controversially deployed the army to fight drug cartels in 2006, most of them blamed on criminal gangs.

On Sunday, cartel gunmen attacked a prison in the border city of Ciudad Juarez, leaving nearly 20 people dead and allowing 25 inmates to flee.

The next day, seven people were killed during a police operation to recapture the prisoners.

The escapees included Ernesto Alfredo Pinon, known as "El Neto," the leader of a gang allied with the Juarez drug cartel.

Pinon, who had been sentenced to more than 200 years in prison in 2010 for kidnapping and murder, was killed on Thursday in a shootout with security forces, authorities said.
#Joe Biden
Add Comment