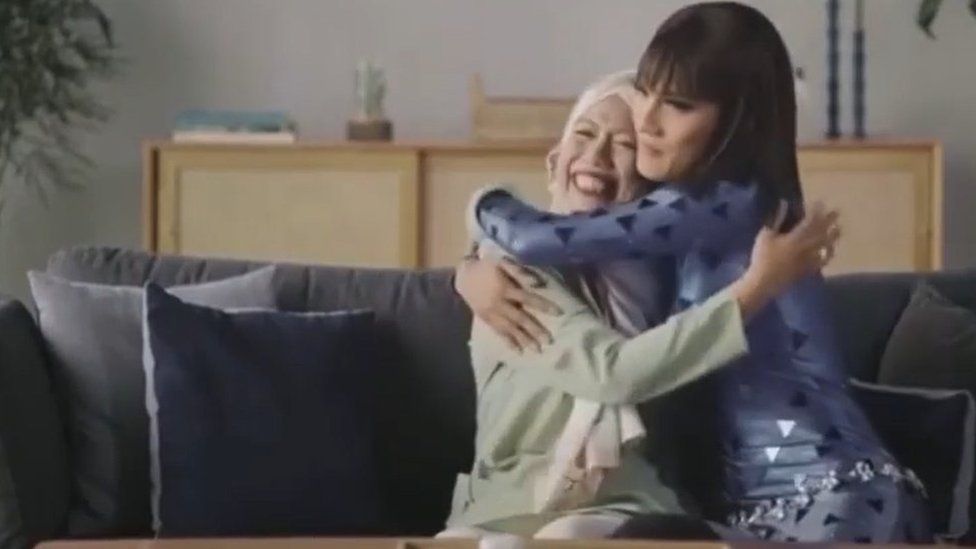 Samsung has pulled an ad showing a Muslim mother expressing support for her drag queen son, after backlash from some parts of the Muslim community.

Several social media users alleged it was "an attempt to push LGBT ideology".

In a Facebook post on Wednesday, Samsung said it was aware the video "may be perceived as insensitive and offensive".

The ad was meant to promote Samsung's new wearable products, like noise-cancelling earbuds and a smart watch with a heart rate monitor.

It filmed several participants' reactions as they listened to heartfelt recorded messages from their loved ones. One of the pairs of participants featured a Muslim woman wearing a headscarf as she heard a message from her son, who was a drag performer.

"You are just unbothered having people looking or judging you differently, having a son that does drag," he tells her in his message.

The scene sparked outrage online, with some saying it was insensitive to the Muslim community, although others defended it and criticised its removal.

"We are against the ideology of mainstreaming homosexuality and transgenderism into a conservative society," one user Syed Dan wrote on Facebook.

"It disrupts the harmony within the Malay-Muslim community."

Another user, Muhammed Zuhaili, posted that the video had "surfaced much confusion and questions amongst the (Muslim) community".

The South Korean tech giant later scrubbed the video from all its public platforms.

"We acknowledge that we have fallen short in this instance," the company wrote in a Facebook post on Wednesday.

Singapore has a minority ethnic Malay community, most of whom - though not all - identify as being religiously Muslim.

However, other social media users came out in support of the ad, questioning the controversy that surrounded it.

"Imagine being offended and threatened by a mother's love for her child," wrote one Instagram user.

Others criticised Samsung's decision to pull the ad, pointing out that it contradicted its statement that "innovation and growth are driven by diversity and inclusivity".

"If the advertisement does not run afoul of any laws .. and has a positive message on the acceptance of marginalised people, Samsung should stick to its guns," said one Facebook user.

Members of the local LGBTQ community similarly expressed their disappointment at the ad being taken down.

"It was the first of its kind video coming from a minority group on a relationship between mother and son [and] was so affirming," Hilmi, a centre manager at local LGBTQ+ organization Oogachaga told BBC News.

"As a queer Malay man, I am saddened to see a video that expresses unconditional love [being] taken down abruptly due to societal pressure from a group of people with conservative values."

Meanwhile, in a video posted on Instagram on Thursday, the son featured in the video also reassured followers that he and his mother were "doing well."

"I'm not going to talk about the comments that [were] said in [that video]," the drag performer known as Vyla Virus said.

"It was all about a mother's love in that video, nothing else was mentioned."