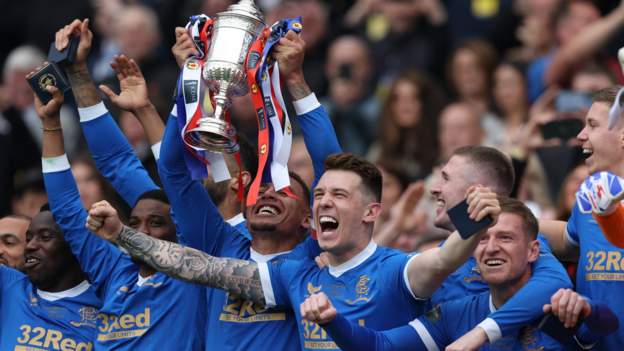 Two goals in three extra-time minutes by substitutes Ryan Jack and Scott Wright won Rangers the Scottish Cup against Hearts and eased the pain of their Europa League final defeat.

The Ibrox side claimed the trophy for the first time in 13 years after Jack crashed a shot in off the bar from the edge of the box, before Wright finished low past Craig Gordon.

Hearts stood strong in the 90 minutes but did not offer enough in attack, apart from Ellis Simms' lunging effort off a post after only 10 minutes.

The Rangers end of Hampden celebrated joyfully at the full-time whistle, just three days after their Europa League journey ended in heartbreak on penalties against Eintracht Frankfurt in Seville.

Manager Giovanni van Bronckhorst made five changes to his team after 120 minutes of energy-sapping football in Spain, and his side again defied suggestions of fatigue as the match wore on.

That was despite this being their 66th match of the season, and the fourth of their past 11 to go to extra time.

In fact, it was the Ibrox side who finished the stronger. Hearts goalkeeper Gordon pulled off a remarkable stop with his left foot to deny Joe Aribo in stoppage-time, before Wright headed on to the top of the bar with the last chance of normal time.

But Rangers carried the momentum straight into extra time, as Aribo headed over from point-blank range before Jack took the hardest chance of the afternoon by smashing in off the bar from 20 yards.

The west end of Hampden erupted, and it seemed to rattle Hearts, who stretched themselves immediately in pursuit of an equaliser only to be dealt a decisive blow on the break.

Rangers won the ball on the edge of their own box, and Ryan Kent went streaking up the pitch before playing in Wright, who kept his cool to fire low into the corner past Gordon.

That cushion allowed Van Bronckhorst to afford a late substitute appearance to 40-year-old goalkeeper Allan McGregor, whose Rangers contract is expiring, amid speculation that his glittering playing career might now be at an end.

Hearts could not test him as the final slipped away from them. The Tynecastle side were bright in the first half but fell deeper into their own territory after the break.

They will be left wondering what might had been had Simms turned in Liam Boyce's cross from six yards early in the first half.

But it is Rangers who can celebrate ending an eventful season with a trophy, having lost out on the Premiership title and Europa League. While the pain of Seville will linger, a first domestic cup since 2011 is something to savour.

Man of the match - Calvin Bassey 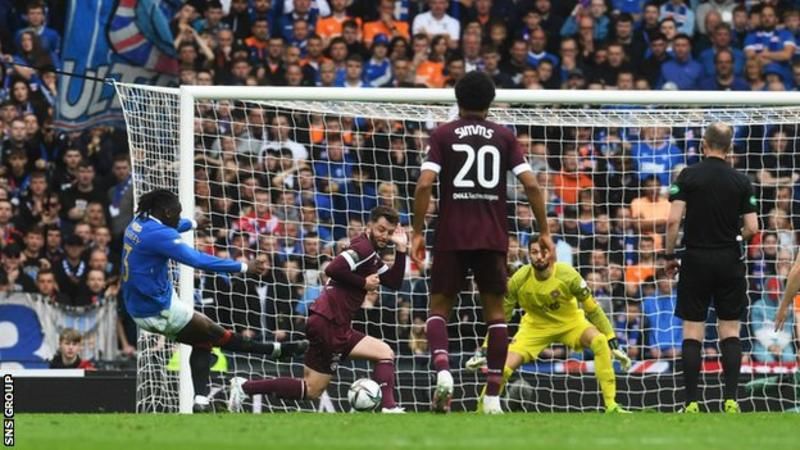 Another outstanding performance from Bassey to back up his display in the Europa League final. He was a machine at left-back this time, and laid on three good chances for team-mates and could have scored himself

This was another monumental effort from Rangers. To go the full distance for the fourth time in 11 games and win is an incredible feat, particularly given how much mental and physical toll Wednesday night's shootout defeat must have taken.

It felt like the last dance for much of this current group of Rangers players too, with McGregor, Steven Davis and Connor Goldson all out of contract and others likely to move on as well. With that in mind, it felt important to end with a trophy.

Last season's unbeaten league campaign was so important to the club, but to let the title go so quickly was disappointing, and their record in domestic cups has been poor over the past few seasons. Defeat here would have left this group short of the medals they might have expected.

Instead, a trophy plus a memorable and unexpected run to a European final means those who do depart can go out on a high and with a medal around their neck before Van Bronckhorst looks forward to progressing what has been a good start at Ibrox.

As for Hearts, this is their third Scottish Cup final defeat in four seasons. The good news is they keep getting here, but they are yet to show the best of themselves, having lost twice to Celtic, and now to Rangers, in Scottish football's showpiece.

Had Simms put his effort six inches to the right, they would have gone into the lead and who knows what would have happened, but the reality is they faded as an attacking force the longer the game went on.

Third place, guaranteed group-stage football in Europe, and a cup final is far from a poor season's work though, particularly having been in the Championship a year ago.

Robbie Neilson's side battled hard - John Souttar and Cammy Devlin were outstanding, as was Simms in the first period - but ultimately they were not quite good enough.

What did they say?

Rangers manager Giovanni van Bronckhorst on Premier Sports: "We worked so hard and came so far in Europe, and the cup. But in the end, you want to have something in your hands as a reward, and today we did.

"We worked really hard and I think we looked much stronger in extra time, and I think we deserved the win today. I'm very impressed and proud of them."

Hearts manager Robbie Neilson: "Not winning it is a huge disappointment. We have to take that on the chin. We've come up from the Championship, finished third, secured group stage football, got to a final, we just couldn't take that final wee step.

"We've had hard times over the last couple of years, but we're getting there. We need to step forward and come here and win, get closer to the Old Firm, get into the Europa League, but we're at the start of it now."