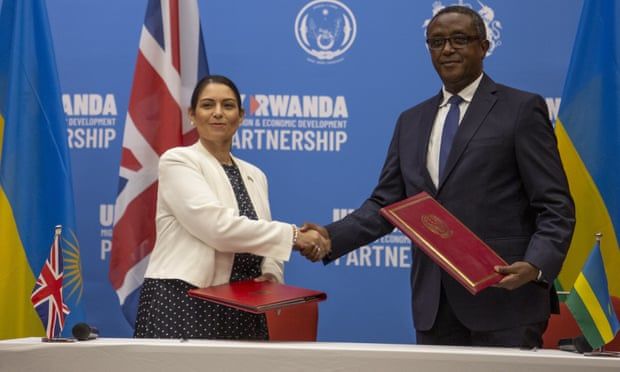 Priti Patel could face a Home Office mutiny over plans to process migrants 5,000 miles away in Rwanda after overruling officials to push through the scheme.

The home secretary issued a rare ministerial direction to overrule concerns of civil servants about whether the scheme would deliver value for money.

It is only the second ministerial direction – an order enforced by a minister despite objection from a permanent secretary – the Home Office has received in 30 years. The first was to speed up the Windrush compensation scheme before legislation.

Civil servants could stage mass walk-outs in protest against the new plans, unions have warned.

Britain has promised Rwanda an initial £120m as part of an “economic transformation and integration fund”, but the UK will be paying for operational costs too. A set amount of funding will be allocated for each migrant, expected to cost between £20,000 and £30,000 a person for the flight to Rwanda, and the first three months of accommodation there.

The immigration minister, Tom Pursglove, said on Friday he believed the move would save Britain money in the longer term.

However, civil servants are against the policy on legal and ethical grounds, and are expected to express their distaste over the direction.

Dave Penman, the general secretary of the FDA trade union, warned officials could demand a transfer from the Home Office or leave the civil service entirely rather than deliver the policy.

The Public and Commercial Services union said that “to attempt to claim this is anything other than utterly inhumane is sheer hypocrisy”.

Peers, human rights lawyers and members of the opposition have also condemned the scheme – even claiming it is unlikely to happen due to judicial reviews and other court actions set to challenge the legality of the measures.

The shadow prisons minister, Ellie Reeves, told Times Radio: “The UNHCR [UN refugee agency] have come out really, really strongly condemning the government’s proposals, as have many organisations, and it seems the government’s own civil servants have expressed huge misgivings about the plans, which seem to be completely misguided.”

She said: “We are in the middle of a cost of living crisis, so it doesn’t seem the right way to be spending money on an unethical and unworkable scheme that won’t deter people from coming over.”

On Friday, the UNHCR condemned the plan as “a symbolic gesture” that would be unworkable in practice.

Despite the backlash, Patel believes other countries will follow the UK’s asylum proposals. She said Denmark could be among those to reproduce the UK’s “blueprint” system.

“There is no question now that the model we have put forward, I’m convinced is world class and a world first, and it will be used as a blueprint going forward, there’s no doubt about that,” Patel said.

“I would not be surprised if other countries start coming to us direct on the back of this as well.”

About 6,000 people have been brought ashore after crossing the Channel in small boats so far this year.

The Ministry of Defence confirmed 181 migrants crossed to the UK on six boats on Good Friday, with more expected during the good weather over the Easter weekend.