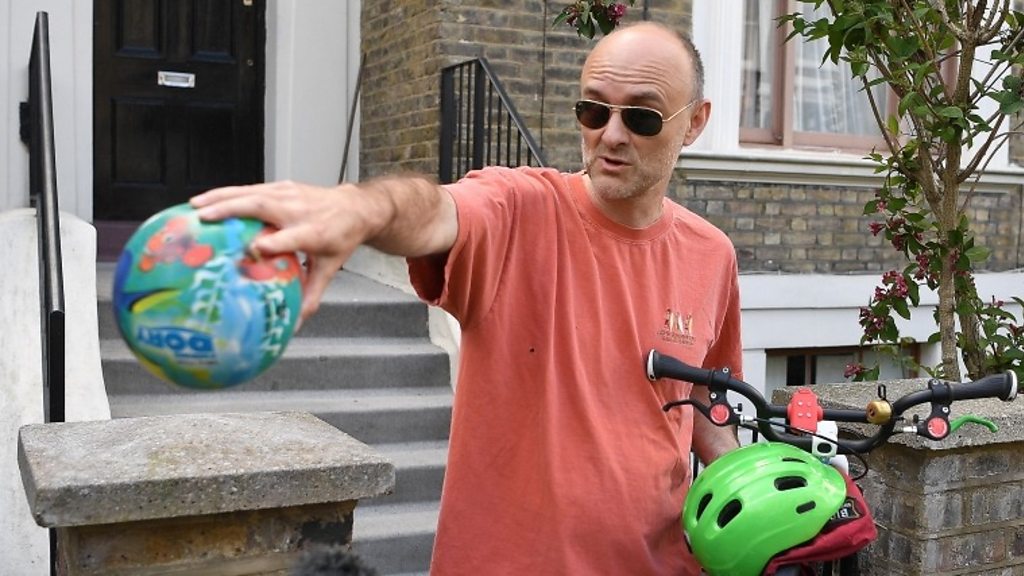 He and the government had said he acted "reasonably and legally" by driving from London to County Durham while his wife had coronavirus symptoms.

But the Observer and Sunday Mirror are now reporting he was seen a second time in the North East, after recovering from his own Covid-19 symptoms and returning to work in London.

No 10 said the story is "inaccurate".

Ministers said Mr Cummings and his wife had chosen to self-isolate at a property adjacent to other family members in case they needed help with childcare.

Speaking to reporters outside his home in London on Saturday, he said he would not be resigning and had done the "right thing" by travelling 260 miles with his wife and young son to be near relatives when she developed Covid-19 symptoms at the end of March.

Transport Secretary Grant Shapps justified the adviser's trip, saying he "stayed in the same place" and was seeking support with childcare.

But the Observer and the Sunday Mirror said witnesses have reported seeing Mr Cummings in Barnard Castle, more than 25 miles from Durham, on 12 April.

On 14 April, he was seen in London. According to the papers, he was spotted again in Houghall Woods near Durham on 19 April.

Mr Cummings is yet to respond to the new claims.


Who is Dominic Cummings?

Caring for children - what are the lockdown rules?

What are social distancing and self-isolation rules?

The BBC's political correspondent Iain Watson says that ministers will be hoping that questions about Mr Cummings' movements will not have dented public trust in the government's lockdown guidance.

The story of Mr Cummings' journey to Durham originally appeared in the Guardian and Daily Mirror on Friday evening.

In response to the fresh claims in the papers' Sunday publications, Downing Street said: "Yesterday the Mirror and Guardian wrote inaccurate stories about Mr Cummings.

"Today they are writing more inaccurate stories including claims that Mr Cummings returned to Durham after returning to work in Downing Street on 14 April.

"We will not waste our time answering a stream of false allegations about Mr Cummings from campaigning newspapers."

Opposition parties renewed their calls for the prime minister's adviser to go.

The SNP's Ian Blackford said Mr Cummings "has to leave office", while acting Liberal Democrat leader Sir Ed Davey told BBC Radio 5 Live: "If Dominic Cummings has not been sacked by tomorrow, I think the prime minister's judgement is in serious doubt."

Government advice had been for people to stay at home during the first weeks of lockdown. Self-isolation at home continues to be advised for those with coronavirus symptoms.

However, ministers offered their support to Mr Cummings earlier in the day, with Cabinet Office Minister Michael Gove tweeting: "Caring for your wife and child is not a crime."

But following the fresh reports concerning the alleged second visit to County Durham, a Labour source said: "If these latest revelations are true, why on earth were Cabinet ministers sent out this afternoon to defend Dominic Cummings?"

Before the new allegations, both Labour and the SNP said Mr Cummings flouted the government's own advice and called for an urgent inquiry into his conduct.

It comes as the government announced 282 more people had died with coronavirus since Friday, across all settings, bringing the total to 36,675.

When approached by reporters outside his home on Saturday, Mr Cummings said he "behaved reasonably and legally" when asked about the trip from London to Durham, which took place in late March.

Asked whether it looked good, he said: "Who cares about good looks? It's a question of doing the right thing. It's not about what you guys think."

He was later asked by reporters whether he would reconsider his position, he said: "Obviously not."

"You guys are probably all about as right about that as you were about Brexit: do you remember how right you all were about that," he added.

Transport Secretary Grant Shapps said the prime minster - who has not commented so far - had "full confidence" in Mr Cummings, following calls from the SNP and the Scottish Labour Party for him to quit or be fired.

Durham Police and Crime Commissioner Steve White said it had been "most unwise" for Mr Cummings to make the journey, "given the whole ethos" of the government's guidance.

The initial reports in the Guardian and the Daily Mirror newspapers quoted police saying they had spoken to a family in Durham on 31 March and about the "guidelines around self-isolation and reiterated the appropriate advice around essential travel".

A statement by Downing Street was issued on Saturday, denying that police had spoken to Mr Cummings or his family "about this matter, as is being reported".

In an updated statement on Saturday evening, Durham Police said officers learned of his trip on 31 March and spoke to Mr Cummings' father the following day.

"During that conversation, Mr Cummings' father confirmed that his son had travelled with his family from London to the North-East and was self-isolating in part of the property.

"Durham Constabulary deemed that no further action was required. However, the officer did provide advice in relation to security issues," a statement from the police force said.