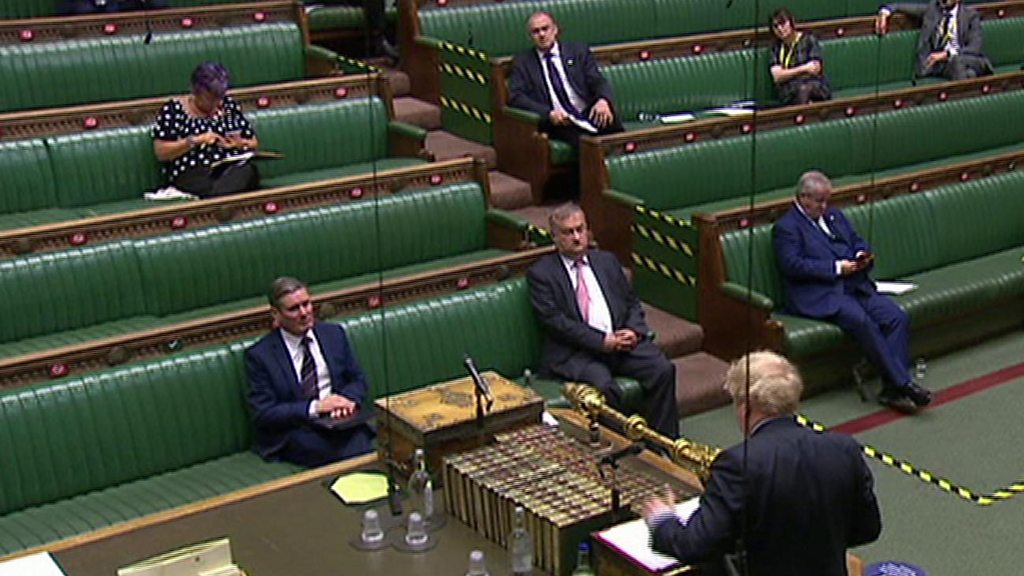 Boris Johnson has for the first time committed to an "independent inquiry" into the coronavirus pandemic.

The PM said now was not the right time for an investigation but there would "certainly" be one "in the future" so lessons could be learned.

A group representing people bereaved by Covid said the PM's pledge was a "long way from what families need to see".

Covid-19 Bereaved Families for Justice says the PM has refused to meet them to discuss their concerns.

The group, which met Labour leader Sir Keir Starmer earlier, is calling for an immediate inquiry into the government's handling of the pandemic.

In a statement, it said: "We need to know that any inquiry will be public with the ability for families to contribute their experiences and that it will have the power to access all of the evidence and witnesses needed.

"We also believe that a part of any inquiry must begin now to take fast action in order to prevent further unnecessary deaths should we encounter a second wave."

The group added that it was "so disappointing the prime minister is refusing to meet with or listen to bereaved families".

At Prime Minister's Questions, acting Lib Dem leader Sir Ed Davey said the UK had "suffered one of the worst death rates in the world and Europe's worst death rate for health and care workers".

If the PM "still rejects an immediate inquiry," he asked, "will he instead commit in principle to a future public inquiry?"

Mr Johnson said now was not the "right moment to devote huge amounts of official time to an inquiry".

But he added: "Of course we will seek to learn the lessons of this pandemic in the future and certainly we will have an independent inquiry into what happened."

Downing Street was unable to give any further details about the nature of the inquiry when pressed on whether it will be judge-led or when it will begin, saying that the remit would be set out "in due course".

Sir Ed Davey said he had written to the prime minister to ask him to "confirm that it should be an inquiry under the Inquiries Act 2005," which he said would give it "real teeth… to get to the bottom of the issue".

He told BBC news he had called for an inquiry "because there's been tens of thousands of deaths" and the bereaved families "need to have some answers". He also said an inquiry should look at the economic impact of the virus.

Sir Ed's rival for the Lib Dem leadership, Layla Moran, who chairs an all-party group on coronavirus, called on the prime minister to "commit to a public inquiry now, not kick this into long grass".

During PMQs, Labour leader Sir Keir Starmer pressed the prime minister on whether he had learned the lessons of a report this week, which warned about 120,000 new coronavirus deaths in a second wave of infections this winter.

"One of the key recommendations in this report commissioned by the government's office for science, is that testing and tracing capacity will need to be significantly expanded to cope with increased demands over the winter," said Sir Keir

"The reality is this - trace and track is not working as promised as it stands today."

The Labour leader questioned whether the prime minister had even read the scientists' report.

Mr Johnson said he was "aware of the report" but accused the Labour leader of "endlessly knocking the confidence of the people in this country" with criticism of the government's approach.

He added: "Our test and trace system is as good as or better than any other system in the world and yes, it will play a vital part in ensuring that we do not have a second spike this winter."

Sir Keir said it was "perfectly possible to support track and trace and point out the problems".

He told the PM that "standing up every week and saying it's a 'stunning success' is kidding no-one - that's not giving people confidence in the system".

"They'd like a prime minister who stands up and says 'there are problems and this is what I'm going to do about them'," he added.

Mr Johnson accused the Labour leader of constantly switching from supporting the government to attacking it, with a swipe at Sir Keir's former profession as a lawyer.

"He needs to make up his mind about which brief he's going to take today because at the moment he's got more briefs than Calvin Klein."

A spokesman for the Labour leader said after PMQs: "Keir was raising very serious concerns from bereaved relatives and the prime minister responded with a pre-prepared joke."

Independent inquiries can take many forms - from full public inquiries that can take years, or in some cases decades, and cost millions of pounds; to smaller scale, more fleet-footed investigations.

The idea is to hold the powerful to account and try to learn lessons from decisions that have gone wrong, and how to avoid repeating scandals and tragic events in the future.

Recent examples of judge-led inquiries include the Leveson inquiry into media standards, or the ongoing inquiry into the Grenfell Tower catastrophe.

Other inquiries, such as 2009 Iraq inquiry, headed by a retired senior civil servant Sir John Chilcot, do not take evidence under oath.

The government of the day is normally expected to adopt many, if not all, of the recommendations of an official inquiry, although it does not always work out like that in practice.
#COVID-19  #Covid  #Coronavirus  #Boris Johnson
Add Comment