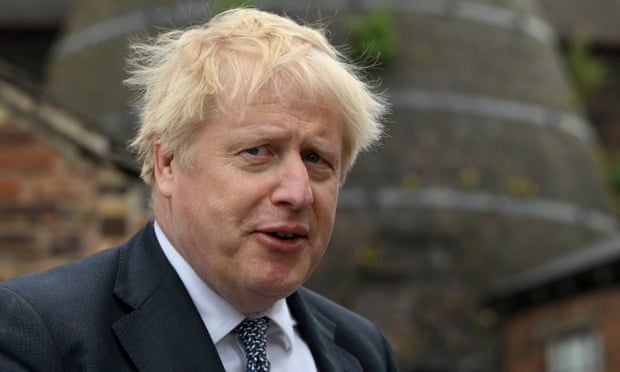 Boris Johnson has been accused of presiding over Covid lockdown breaches on a “record-breaking scale” after the Metropolitan police said it had issued 100 fixed-penalty notices as part of its Partygate investigation.

The force previously said it had issued more than 50 fines, a figure updated on Thursday to more than 100. This was the first public information since updates on the investigation’s progress were paused ahead of last week’s local elections.

Johnson confirmed neither he nor his wife, Carrie, were among those issued with new fines, while Downing Street said this was also the situation for Simon Case, the cabinet secretary. The Met statement said the investigation “remains live”, indicating more penalties may come.

In a pooled television clip from a visit to Birmingham on Thursday, the prime minister maintained his refusal to discuss the issue until the conclusion of the police inquiry and the release of a parallel civil service report into illicit parties.

“As soon as I have any more to say about that, you will be amongst the very first to know,” Johnson said when asked about the fine, repeating the answer when asked why he had not resigned after being fined earlier in the investigation, given Keir Starmer’s pledge to do this if he is punished for breaching Covid rules. Asked if he or his wife had received new fines, he said: “No.”

Operation Hillman, the codename for the investigation, is looking at 12 separate events in Downing Street and Whitehall during 2020 and 2021. The Met’s leadership believed in February it would be completed within weeks, but there is still no sign of an imminent end.

Some of the new penalties are understood to have been issued for a party inside Downing Street on 18 December 2020, which Johnson did not attend, but which No 10 aides were later filmed joking about.

Footage was leaked in December 2021 of a rehearsal a year earlier for proposed televised Downing Street briefings, during which officials talked about an apparent Christmas party a few days before.

Johnson’s then-director of communications, Allegra Stratton, was shown laughing as she struggled to answer questions from a colleague, acting as a journalist, about whether a party occurred. “It wasn’t a party, it was cheese and wine,” one aide joked. Stratton resigned after the video was made public.

Some of those who have received fines have become increasingly exasperated at the fact the prime minister has escaped almost unscathed.

One former official suggested junior colleagues would have felt “actively marked down” had they declined to attend events organised by “the most senior officials in No 10” – such as the “bring your own booze” gathering to which Johnson’s principal private secretary, Martin Reynolds, sent invitations.

“Martin’s job was to check with the Covid taskforce to see if things were within the rules,” the former official said. “If he’s inviting you to come, you’re going to assume that it’s Covid compliant.”

Last month, it was confirmed that Johnson had received a fixed-penalty notice, for a birthday party in June 2020. His wife and the chancellor, Rishi Sunak, were penalised for the same event.

Angela Rayner, Labour’s deputy leader, said the new fines meant Downing Street had “racked up the dubious distinction of receiving more fines on the prime minister’s watch than any other location”.

She added: “Boris Johnson made the rules, and then broke them at record-breaking scale.”

Johnson has told friends he believes he will not receive further penalties, and said publicly last week he had not yet been sent a questionnaire from the Met about the leaving party for his aide Lee Cain, at which he is believed to have poured drinks, and which is one of the 12 events being investigated.

Several sources have suggested a separate party was held on the same night, hosted by Carrie Johnson upstairs in the No 10 flat, at which Abba was played loudly. Johnson is expected to argue that while he was present at that gathering, it was only to interview a possible candidate for a job.

Many Conservative MPs are awaiting the publication of the full civil service report, put together by the senior official Sue Gray, before deciding whether to move against the prime minister.

So far, the Cabinet Office has only published a pared down version of her findings, after she paused her work while the Met investigation took place.