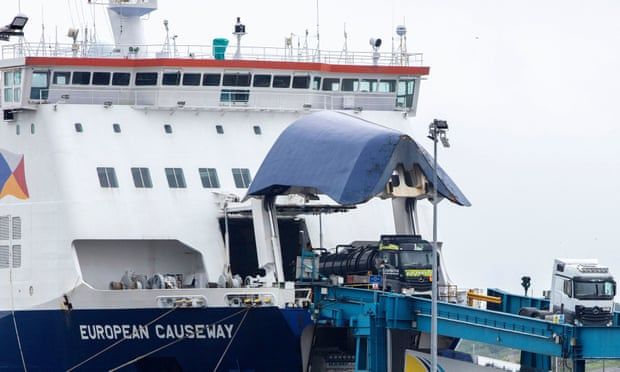 Northern Ireland protocol: what is the UK and EU’s standoff about?

The European Commission has described a UK bill to scrap post-Brexit checks and controls in Northern Ireland as “illegal”, “extremely damaging” and casting a shadow over British-EU relations. On Wednesday, it set out its response.

What is the EU doing?

The commission has reactivated a legal case against the UK government over failure to implement the Northern Ireland protocol, part of the Brexit agreement signed with Boris Johnson in 2019 that leaves the region in the EU single market.

The case was launched in March 2021 after the government announced that it would ignore some EU agri-food rules, although later frozen by Brussels as a goodwill gesture to promote talks on revising the protocol.

The EU also launched two new cases based on longstanding complaints over alleged failure to share customs data and set up border inspection posts at Northern Irish ports and airports. Officials say the UK has refused to share real-time customs data that would allow for “risk control analysis” of goods. The UK is also accused of not constructing permanent border control posts, relying instead on temporary, understaffed facilities. For EU officials it’s a recipe for smuggling, which they say is already happening because of lax checks.

What does the British government say?

The government said it was “disappointing” that the EU had chosen to relaunch legal proceedings over steps it had taken “to stop the problems caused by the protocol from getting worse”.

It also rejected the commission’s two other complaints. The government said it had already offered the EU all the data needed to monitor goods traversing the Irish Sea and blamed EU officials for not using it or a purpose-built IT system. And it said checks were happening at temporary border facilities.

If there is no agreement, the commission could refer the UK to the European court of justice (ECJ) as soon as August over the agri-food complaint. The two new cases would take longer to get to the Luxembourg court. In all three, the ECJ could issue daily fines if it ruled against the British government.

But does the ECJ have jurisdiction?

The UK wants to end ECJ jurisdiction in Northern Ireland. The EU regards this as a red line, arguing that only the European court can be the arbiter of EU law.

If the British government refused to recognise a ruling or fine from the ECJ, the EU would almost certainly impose tariffs on British goods or suspend the entire trade and cooperation agreement. But the European Commission vice-president, Maroš Šefčovič, stopped short of spelling out this threat. He argued ignoring an ECJ ruling would just be “piling one breach” of international law on top of another, asking: “Is it compatible with the proud British traditions of upholding and respecting the rule of law and international law?”

That’s unclear. The EU has said it is ready to meet on Thursday to restart talks on modifying the protocol; the UK insists it wants a negotiated solution. But the two sides remain far apart: the EU is ready to change some rules on the movement of goods, but Britain wants a complete rewrite of the protocol that would ditch core elements.

In an attempt to move on, the commission has stepped up its messaging on how the protocol can be changed, based on proposals made last October. At a press conference, Šefčovič waved a three-page form that would be required for a lorry travelling from Great Britain to Northern Ireland carrying a variety of goods. Using Johnson’s own words, Šefčovič said this was one of the practical “really oven-ready” solutions in line with what Northern Ireland’s businesses wanted.

The UK maintains that EU proposals are worse than the status quo and would result in more burdensome checks.

The two sides have not held formal talks since February. The current standoff only deepens the rift.