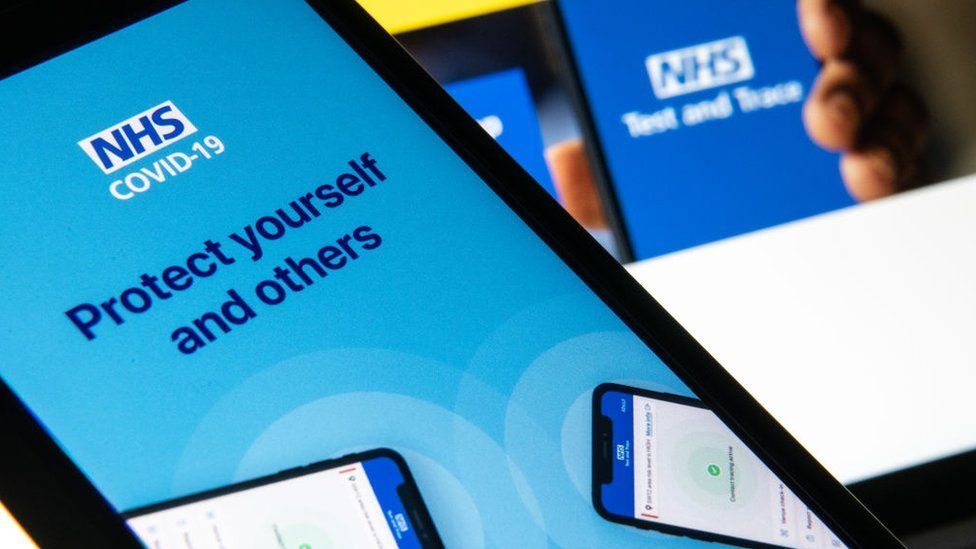 Researchers estimate the app prevented hundreds of thousands of cases of the disease, and thousands of deaths.

"On average, each confirmed case who consented to notification of their contacts through the app prevented one new case," the paper claims.

The research has been accepted for publication by the journal Nature.

Some of the researchers were themselves involved in the creation of the NHS contact-tracing app, and had previously released some of the estimates.

But the inclusion in Nature means the paper has now been peer-reviewed by other academics. It has been made available as a preview of papers due for publication.

The paper covers the time between the app's launch on 24 September last year until the end of 2020. It was "used regularly" by 16.5 million people - about 28% of the UK population, the research says.

It works by using a smartphone's sensors to measure how close a user is - and for how long - to other app users. If one of those people tests positive for coronavirus, the app can issue an alert telling those who have been in close contact to self-isolate.

They estimate that every 1% increase in app users resulted in cases being reduced by between 0.8% and 2.3%.

The difference between those two numbers comes down to two different ways the team used to calculate the impact of the app.

The first used a "modelling" approach, making assumptions about transmission and how strictly people stuck to quarantine. The second involved looking at data from local authorities on actual cases. Both were compared to how widely the app was used to estimate its impact.

Researchers said the number of cases prevented was 284,000 on the modelling approach, and 594,000 using the statistical one. That translated to 4,200 or 8,700 prevented deaths respectively.

"On balance, an effect size between the two estimates seems most likely," the researchers said.

But they also noted that there could have been another "genuine, albeit indirect, effect of the app".

They suggested that "users [could] maintain a greater distance from others than they otherwise would have done, aware that the app monitors distance and could later advise quarantine.

"This would mean that our modelling estimate... is too low, and our [higher] statistical estimate is more accurate," they suggested.

The research paper also revealed some info about how the app was used.

It was more widely used in areas that were "more rural, with less poverty", and the effect on reducing transmission was larger after the significant changes to the way the app's tech worked in October - something the researchers referred to as "a significant upgrade".

Before the upgrade, the app had faced a series of struggles. Initially, the UK opted to build its own system rather than the widely-used built-in Apple-Google system offered by the tech giants, before reversing course.

When it was launched, it emerged some older phones could not run the app, and the contact tracing could at times be inaccurate. It also faced resistance over misplaced concerns the tracking functionality could somehow be accessed by police.

More recently, the entire Test and Trace operation - including manual contact tracing, which has similar rates of infection to those alerted by the app - has been heavily criticised by politicians as having "no clear impact" despite a multi-billion budget.

This latest research suggests that the app, taken by itself, has had some effect.

But the researchers also warned about placing too much faith in the system.

"Digital tracing is not a substitute for manual tracing: both are valuable," the paper says.

"It is not a substitute for social distancing or face masks: control of the epidemic requires all available interventions to work together."