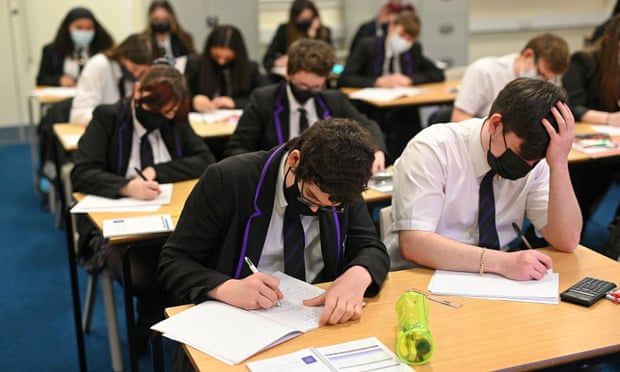 In a letter to the education secretary, the Commons education select committee demanded answers to a range of issues within the next three weeks, telling Gavin Williamson “we have a real fear that the package of measures being proposed, as it stands, risks much higher grade inflation happening this summer”.

In January the government announced that formal exams for GCSEs and A-levels this summer would be cancelled, along with vocational qualifications such as BTecs. Instead grades would be awarded by teacher assessment, with exam boards providing quality assurances.

But MPs on the education committee remain unhappy at the process to be used by the Department for Education (DfE) and Ofqual, the exam regulator for England.

“Without standardised assessments and with a lack of external, impartial assessors to provide the checks and balances to guarantee fairness, there is every possibility of a ‘wild west’ playing out with grades this summer,” says the letter, signed by Robert Halfon, the Conservative MP for Harlow who chairs the committee.

The committee warned that grade inflation could go well beyond that seen last summer, when teacher assessments replaced a botched algorithm developed by Ofqual that relied on a school’s previous exam results to grade current students.

“With no standardisation whatsoever, there is an even greater risk that, come results day, there will be an excessive hike in higher grades and potential for real inconsistencies … in the way that students have been graded by their schools and colleges,” the letter said.

Halfon said “there are no easy answers” to the disruption caused by the coronavirus pandemic. “However, the DfE and Ofqual should consider some kind of standardised assessment and a more robust way of validating teacher-assessed grades,” he said.

The committee demanded further details from the DfE and Ofqual to justify several of its decisions, including how schools are to measure the quantity of work required by students to pass their courses.

The MPs also told the DfE to show an “exit strategy” to eliminate grade inflation: “We now need to see your own route map clearly setting out how we will revert back to ‘normal’ grading standards and what the government is doing to ensure that employers do not penalise these cohorts in the job market.”

In response, a spokesperson for Ofqual said: “We expect teachers to use multiple sources of evidence to arrive at a grade, and to use their professional judgment. Schools and colleges will have their own internal quality assurance arrangements which the exam boards will check.”

Separately, Kevin Courtney, the joint general secretary of the National Education Union, said he was concerned the DfE was going to remove any guidance that secondary students should wear masks within schools.

Saying there were concerns that the government was going to remove or dilute any requirements when students returned after Easter, Courtney said: “We would want the masks to stay until the science says that it’s safe to remove them.

“The science is complicated, because you’re talking about the balance of how much transmission there is and how quickly the vaccination is rolled out.

“But we’re concerned that so far we’ve only had masks in classrooms for three weeks, in the vast majority of cases, before schools close for Easter.”
#Coronavirus
Add Comment