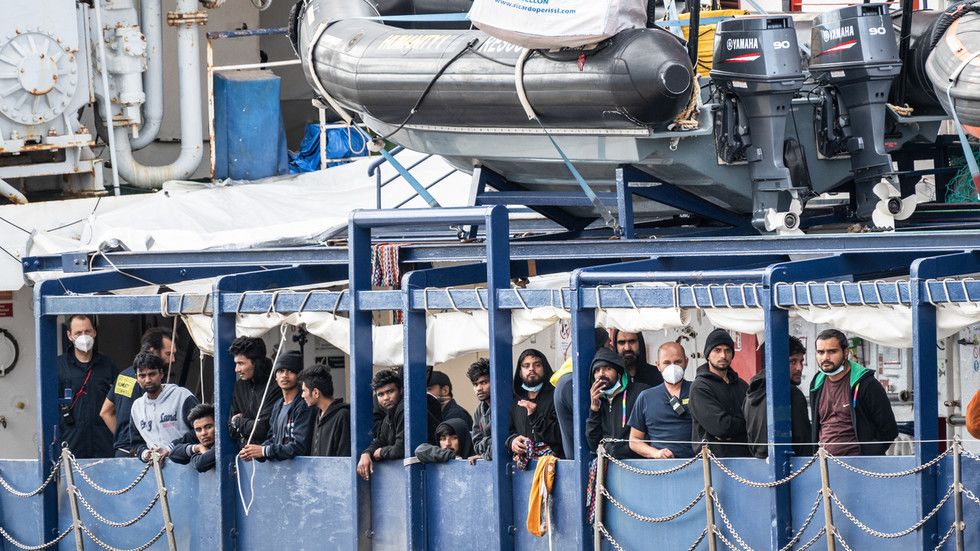 Italy’s recently formed government under PM Giorgia Meloni has followed through on its campaign promise to crack down on illegal migration, with over 200 refugees having been barred from disembarking NGO rescue ships that entered Italian ports.

For the past 14 days, ships run by European charities such as SOS Mediterranee, SOS Humanity and Doctors Without Borders, have been attempting to dock at Italy’s ports to offload several hundred migrants rescued from overloaded boats attempting to cross the Mediterranean Sea from north Africa to Europe.

On Sunday, Italian authorities allowed the Berlin-operated Humanity-1 and Norway-flagged Geo Barents to dock in Italy’s port of Catania to offload some of their passengers, however, only select groups of people were permitted to disembark.

The Humanity-1 was able to offload 144 children, pregnant women, mothers with infants and people in need of urgent medical care, while 35 men remained on board. The Geo Barents was allowed to release 357 passengers but 215 men are still blocked from leaving the ship.

Italian Interior Minister Matteo Piantedosi has stated that those who do not qualify as “vulnerable” must leave Italian waters and has insisted that this should be done by the charity vessels who rescued the migrants in the first place.

The captains of the NGO ships, however, are refusing to leave the port of Catania “until all survivors rescued from distress at sea have been disembarked.” SOS Humanity has vowed to launch legal action against Rome, accusing it of violating European Law and the Geneva Refugee Convention.

Meanwhile, two other NGO ships have been stuck at sea as no Italian ports are willing to accept them. The German-run Rise Above currently has 93 people on board while SOS Mediterranee’s Ocean Viking has some 234 passengers.

The situation is unfolding as Italy’s new Prime Minister Giorgia Meloni has singled out illegal migration as one of the top priorities of her government, during her inaugural speech to Italian MPs.